THE PRIEST IN THE TEMPLE

THE PRIEST IN THE TEMPLE February 25, 2013 Philip Jenkins

Attending a church service can be a sobering experience, and not necessarily for anything said or sung. It’s shocking to read the birth and death dates of the various composers of the words and music of the hymns used by my own Episcopal church. We realize with horror just how short the lifespan was in earlier eras – of how many great artists and thinkers died before seeing their fifties or even forties. That fact must have made death and the afterlife a much more potent presence than it could possibly be today.

This came to mind when I was looking at the dates for George Herbert, one of the greatest Christian poets in English, whom the Episcopal church commemorates on February 27. You may know his Five Mystical Songs, set to music by Ralph Vaughan Williams, or any one of his many short pieces. He was a huge inspiration for many modern writers, especially T. S. Eliot. For all his achievements, though, Herbert’s candle burned out very early, as he died a few weeks short of his fortieth birthday, in 1633. 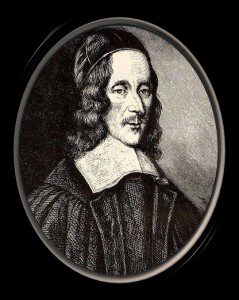 If you don’t know Herbert’s writings, may I recommend them very strongly? It’s hard to give any great idea of them in a short space, but let me offer a couple of samples.

Herbert loved to play with typography, to make the words on the page reflect his themes, so that the poems end up “shaped” like objects such as altars. In Easter Wings, for instance, the words really do appear as wings. 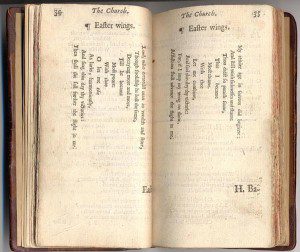 Above all, Herbert was a clergyman, a priest of the Church of England. Perhaps nobody has better conveyed the gap between the aspirations of that position – the priest of the Living God! – and the frail mortal who dared to fill the job. His poem, Aaron makes the contrast still more precise, comparing the glorious priesthood of the brother of Moses with Herbert’s own feeble efforts. Christ, though, makes up all deficiencies:

HOLINESS on the head,
Light and perfection on the breast,
Harmonious bells below raising the dead
To lead them unto life and rest.
Thus are true Aarons drest.

Profaneness in my head,
Defects and darkness in my breast,
A noise of passions ringing me for dead
Unto a place where is no rest :
Poor priest ! thus am I drest.

Only another head
I have another heart and breast,
Another music, making live, not dead,
Without whom I could have no rest :
In Him I am well drest.

Christ is my only head,
My alone only heart and breast,
My only music, striking me e’en dead ;
That to the old man I may rest,
And be in Him new drest.

So holy in my Head,
Perfect and light in my dear Breast,
My doctrine tuned by Christ (who is not dead,
But lives in me while I do rest),
Come, people ;  Aaron’s drest.

On another note, I publish a weekly column at Realclearreligion. I have written on issues involving terrorism and religious violence, but my most recent piece was about the history of the Christian calendar.

February 26, 2013 Calvinist Controversy at Louisiana College
Recent Comments
0 | Leave a Comment
""Religion" as a social club has indeed had its day. It isn't just because people ..."
stefanstackhouse Religion’s Sudden Decline
"Hello Curt, Thanks for your thought-provoking reply. I believe that your reference to tribalism is ..."
Christopher Tounsel Chosen Peoples: Christianity and Political Imagination ..."
"There is prudent caution in accepting new revisionist history.Today's political climate has used revisionism to ..."
Let's Translate This! All History Is Revisionist History
"What Christopher Tounsel wrote about is important all of us Christians to note. But what ..."
Curt Day Chosen Peoples: Christianity and Political Imagination ..."
Browse Our Archives
get the latest from
Anxious Bench
Sign up for our newsletter
POPULAR AT PATHEOS Evangelical
1

The Opium of the People
Cranach
Related posts from Anxious Bench