All Music Is in Heaven

All Music Is in Heaven March 7, 2013 johnturner

“Whoever goes to hell,” Brigham Young commented in the midst of a Jubilee of dancing and merriment in 1848,  “I’ll warrant you won’t hear fiddling or have dancing.” “All music,” he explained, “is in heaven – all enjoyment is of the Lord.” Growing up in a rigorous Methodist household, Young had learned to eschew fiddling and dancing, but after his conversion to Mormonism, he found an uneasy pleasure in such things. “When I was a boy,” he said, “a bushel of apples would not tempt me to dance, but it would no.” Young was always double-minded about such forms of recreation. They could easily lead to sin, especially if church members enjoyed them in the company of Gentiles. However, in and of itself, dancing and music were gifts from God meant for the preservation of physical and spiritual health. Young wanted to carefully regulate such activities, but he meant for the Saints to enjoy them.

I’ve enjoyed becoming familiar with early Mormon hymns. Today, in the minutes of an 1851 meeting of the “Seventies,” I  came across a reference to a song titled “Old Adam Was a Gentleman.” According to Howard Swan, the Saints “never wearied” of this English ballad. TThey even sang at the 1851 Fourth of July celebration in Salt Lake City.

The song wasn’t familiar to me, but I found what might be the original broadside here: 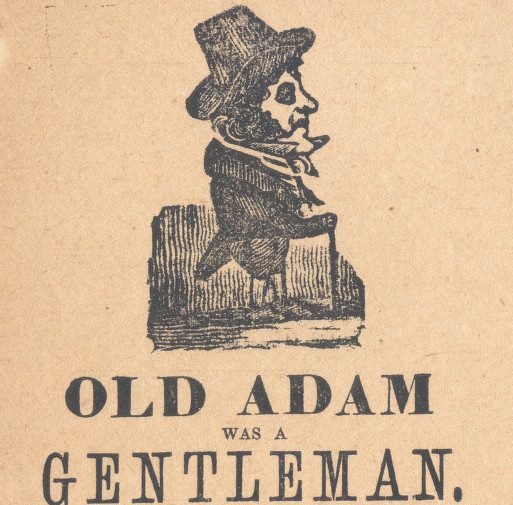 Old Adam was the first man formed,
That everybody knows,
He never paid his tailor’s bill,
Because he wore no clothes;
Nor French kid gloves upon his hands,
As you may well suppose,
No dandy collar round his neck,
Nor shoes to hide his toes.

And Adam was a gentleman, one of the olden times.

He neither rent nor taxes paid,

Nor duns came to his door;
And he’d enough of meat and drink,
And some left for the poor,
But then the poor were not yet born,
Nor either were the great,
No thieves nor rogues had he to fear,
He never locked his gate.
And Adam was…

His wife his dinner cook’d each day,
of good fat roast and boiled,
And oftentimes for want of fire,
his dinner it got spoil’d,
He would have it cook’d by gas,
but he could not afford,
And from Oldham he would have had his coals,
but the pits were not then bored.
And Adam was…

He led a very happy sort
of comfortable life,
Nor quarrell’d he with anyone,
unless t’was with his wife,
And she dare trust him out at night,
for so some people say
Nor ever was she once afraid
that he would go astray.
And Adam was…

His wife, unlike our women now,
in frills and bows ne’er dress’d,
Nor ever tasted gin and tea —
now was not Adam blest?
Her neighbours never scandalized
or treated them with scorn,
She was the pink of woman, sure,

because none else were born.
And Adam was…

Old Adam ne’er example took
by other people’s ways,
He never went to routs or balls,
to concerts or to plays,
For concert rooms and play houses
had not been builded then,
And Eve was never once accused
of flirting with the men.
And Adam was…

He liv’d unto a good old age,
with little care or pride,
And when his days had run their course,
alas, poor Adam died,
Without a good oak coffin then
they lay him in his clay,
Nor were afraid of body snatchers
stealing him away.
And Adam was …

It makes good sense that the Saints would like this ballad. For starters, if it did indeed gain currency around 1840, that’s precisely when the church’s Quorum of the Twelve Apostles traveled en masse to England to begin missionary work in earnest. In all likelihood, English converts brought the song to the American West. Since many of those converts (along with other early Mormons) were not exactly on the high end of the class system, the lyrics would have appealed in that sense as well .Body snatchers were also a live concern, even in Salt Lake City (there was a famous episode of such theft in the early 1860s if memory serves). The ballad, though, doesn’t exactly resonate with Brigham Young’s identification of Adam as humanity’s Father God.

I wish I knew the tune.

March 8, 2013 HOW MANY GOSPELS?
Recent Comments
0 | Leave a Comment
"Good luck on your new path."
Scott. F. feighner A Farewell Post
"Undoubtedly they start the story, then there is an upsurge during and after the first ..."
philipjenkins Of Empires, Faiths, and Unintended Consequences
"I believe that the impressive growth of Christianity in Sub-Saharan Africa is an indirect result ..."
Tony Of Empires, Faiths, and Unintended Consequences
"Intriguing. I didn't know that Walter Rauschenbusch was a prohibitionist! Odd, since his book,Christianity and ..."
Daniel Wilcox “Everything You Know about Prohibition Is ..."
Browse Our Archives
get the latest updates from
Anxious Bench
and the Patheos
Evangelical
Channel
POPULAR AT PATHEOS Evangelical
1