I have already posted on the remarkable survival of ancient apocryphal gospels through the Middle Ages and beyond. In terms of their actual impact on popular belief and practice, these texts had an influence at least approaching the canonical Big Four gospels, and for that reason alone, they demand to be remembered as major sources of Christian history. Some, though, have an added importance in addressing theological issues that remain hotly debated today.

To see just how mainstream these alternative texts were in the medieval churches, consider one image that pervades the religious art of the era, namely the Harrowing of Hell. Drawn from the popular Gospel of Nicodemus, the Harrowing was not far behind the Crucifixion as a theme in medieval Christian imagery, and its impact extended to art, drama and literature. An image fundamental to mainstream Christian belief for over a thousand years thus derived entirely from an ancient alternative gospel.

The story tells how Christ, after the Crucifixion, broke the gates of Hell and rescued from there the souls of the righteous who had died before his time, including the great figures of the Old Testament narrative, from Adam onwards. To do this, he had to confront and defeat the evil spiritual powers represented by Satan and Hades. 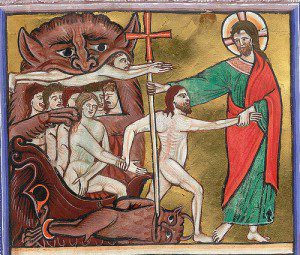 Several Biblical texts point to some such event, although they do not describe it explicitly. The canonical Gospel of Matthew says that, immediately after the crucifixion, “The earth shook, the rocks split and the tombs broke open. The bodies of many holy people who had died were raised to life. They came out of the tombs after Jesus’ resurrection and went into the holy city and appeared to many people.” (Matt 27: 51-53). 1 Peter speaks of Christ preaching or proclaiming to the imprisoned spirits; and Ephesians 4:8–10 reports that “When he ascended on high, he led captives in his train and gave gifts to men.”

The story also fills a logical gap in the canonical gospels. We know that Christ died on Good Friday, and was resurrected on Easter Day. But where was he on Holy Saturday? The descent into Hell provides one answer.

However, the direct source of the Harrowing was a massively influential apocryphal gospel called the Acts of Pilate, often known in the Middle Ages as the Gospel of Nicodemus. The work clearly breaks into two halves, which were originally separate. The first section purports to be a record of the events surrounding Christ’s trial, death and resurrection, as recounted by Nicodemus, the secret follower of Christ who is mentioned in John’s Gospel. The second describes the “harrowing” in a detailed and dramatic section called Descensus Christi ad Inferos, “Christ’s Descent to Hell.” In their present form, both sections seem to date from the fifth century, but they certainly included older stories. 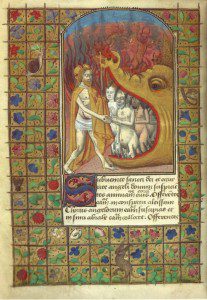 The Descensus illustrates a process akin to Jewish midrash, in which a later author built substantially on a hint in the canonical text. So “many holy people were raised to life”? Inquiring minds naturally want to know more details. Which holy people? Well, the Descensus lists them: John the Baptist, Abraham, Isaiah, Adam and the rest. And naturally, each describes the event that led to their deliverance.

Latin versions of Nicodemus circulated widely. The Harrowing story exercised an immense influence across the continent, and was portrayed in thousands of paintings and carvings, windows and wall-paintings. Just go to Google Images and search the term “Harrowing of Hell.” You’ll be amazed at the volume of material that appears, and also by the number of major artists who have treated this theme through the centuries.

The Harrowing was also popular in literature. This is not surprising given the theatrical character of the Descensus itself, with its extensive dialogues, in scenes that cry out for dramatization. The story  has a claim to rank as the origin of European drama. As early as the eighth century, an Anglo-Saxon collection included a dramatized version, possibly the oldest Christian play designed for actual performance. By the fourteenth and fifteenth centuries, the event was a commonplace of the English mystery plays, and featured in the great poem Piers Plowman. Far from fading in popularity over time, the Harrowing theme was actually reaching its greatest popularity in the years leading up to the Reformation.

No less fascinating for medieval audiences, the story’s setting is that of a siege, as the villainous figures of Hades and Satan struggle desperately to defend their city and its gates against Christ’s onslaught. This image naturally resonated with later readers who saw in it a depiction of well-known forms of warfare. These themes had a potent appeal for an audience in the later Middle Ages, roughly from 1200 through 1500. Visual depictions of the harrowing in this era commonly portray Hell as a walled city, just like the fortified strongholds that Crusaders encountered in the Middle East. Christ usually bears a banner with a cross, very much like the contemporary Crusaders who struggled against the enemies of Christendom, originally in Palestine and Syria, but later in the Balkans and Eastern Europe. The Harrowing now came to be seen as a massive supernatural siege operation, followed by an act of conquest and the liberation of hostages. 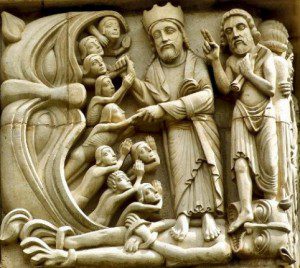 It’s a terrific story, but it also raises intriguing theological questions. As nascent Christianity increasingly broke from the Jewish parent stem, Christians had to address the relationship between the two traditions. All orthodox thinkers valued such prophets and patriarchs as Abraham, Moses and Isaiah, but some at least questioned how people who died before the time of Christ’s sacrifice could benefit from that act, and thereby gain salvation. Matthew’s gospel offered the hint by which this dilemma could be solved, and Nicodemus developed this floridly.

In this vision, Christ intervened directly and personally – we might almost say, militarily – to save those who clamored for salvation, overwhelming the constraints of time and place. While only certain individuals are mentioned as being liberated, there are no obvious limits to the list of those saved after death. It’s a wonderfully attractive vision of the limitless power of Grace.

The doctrine also held something like canonical status for most Christians for well over half the history of the faith.

March 26, 2013 What Does Jesus Look Like?
Recent Comments
3 Comments | Leave a Comment
"Absolutely."
philipjenkins America’s Invisible Churches
"Of course, there is also the entire "house church" phenomena. These range from small congregations ..."
stefanstackhouse America’s Invisible Churches
"I keep asking myself if the churches and other Christian organizations that I recall favourably ..."
Rivikah The Evangelicalism I Love
"Thanks, Alex. I want to believe that there's a lot of healthiness and vitality and ..."
John Turner The Evangelicalism I Love
Browse Our Archives
get the latest from
Anxious Bench
Sign up for our newsletter
POPULAR AT PATHEOS Evangelical
1