If I were to choose the single film that influenced me most, ever, it would be 2001: A Space Odyssey (1968). The astronaut, Dave Bowman, encounters the alien species that originally, millions of years ago, elevated humanity to its dominant species on the planet. They then use him as the basis for another and still greater evolutionary leap that transcends man. The final image shows the Star Child, the first of the new species, contemplating the planet that will be his to reshape. 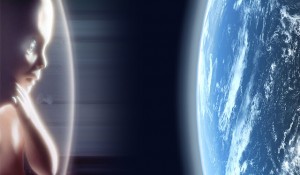 Odd as it may sound, I think of this image when I see a motif that runs through one potent tradition of Christian art, albeit one not well known in the West. (This is just a personal association, so please don’t accuse me of reducing a religious theme to the status of science fiction!)

From the early Christian centuries, many believers held that the Virgin Mary had an exalted status that made her a kind of Christ figure. Her life prefigured and recapitulated that of her Son, from the circumstances of her conception and birth, to her passing from the world. She did not suffer death in the conventional way. Catholics believe that she was assumed bodily into heaven.

The Orthodox assert that she died in the normal way, but that she was taken up into heaven on the third day, when her tomb was found empty. Both churches agree on the date of her passing, which is August 15, a cherished feast. 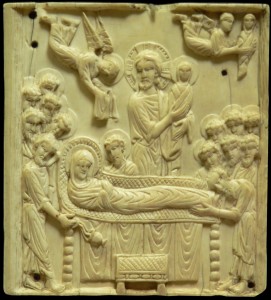 Mary’s passing is described in several texts which circulated widely through the Middle Ages and beyond, and which were treated almost as alternative gospels.

In Orthodox tradition, Mary’s passing is known as the Dormition or Falling Asleep of the Mother of God (Kimisis, Κοίμησις Θεοτόκου) and it is a favorite subject for artists. We see the Virgin on her deathbed, surrounded by the mourning Apostles. Nearby stands her son, receiving her pure soul. 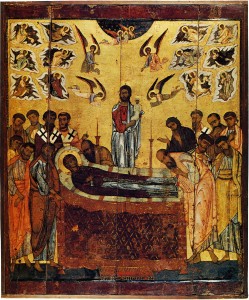 But those artists usually include an additional detail that does not, I think, have a parallel in depictions of any religious scenes in the West. 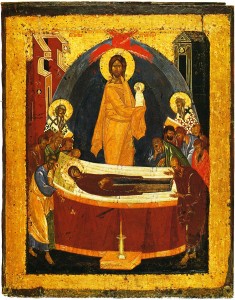 The Jesus who stands at his mother’s bed holds a baby girl, who represents Mary’s soul, in a state of perfect innocence. The image might be suggested by New Testament language of the new birth, or of death as the gateway to a new level of existence.

The symbolism is obvious enough, but it is very powerful. Not the least, it is attractive and surprising to see Jesus as the loving guardian of the child that was his mother.

Am I right here in saying that Western Christian art has no comparable images in which the recently deceased is depicted as a newborn child?