WARS AND RUMORS OF WARS

I posted recently about how wars shape religious change. Depending on the particular circumstances, wartime conditions can have an enormous impact on religious movements and revivals.

Let’s look particularly at the Early Modern period. Wars can have good or bad results for states, but for ordinary people, they are drastic and usually horrible transitions in life. In some cases, they can bring massacre, rape and looting to a previously tranquil area. Even if that does not happen, young men are called on to serve in wars, and often to suffer death or maiming.

Pirates and privateers plunder sea travel, armies and bandits steal merchants’ goods on land. Labor shortages and disruptions of trade wreck the economy, and often bring hunger to communities that always existed on the verge of subsistence. 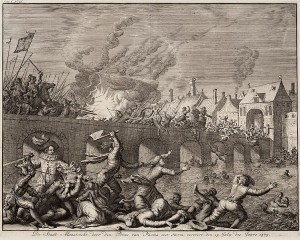 Weakened societies are vulnerable to plagues and epidemics, which are spread still more widely by wandering armies. Those diseases can kill far more victims than do swords or rifles. After the war has ended, returning veterans have been deeply changed by their experiences. 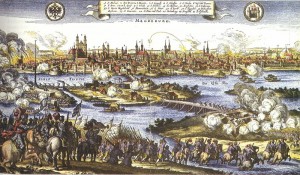 Although ordinary people might have little invested in the power politics of the elites, the situation is still harsher if a nation has suffered military defeat or humiliation. Defeated countries might raise extra taxes to pay war indemnities, they might lose territories to foreign occupation. Most important, their clergy must explain why God has permitted that nation to experience such a defeat. The higher the expectations with which the country entered the war, the more exalted the talk of holy war and crusade, the more embarrassing the subsequent post-war explanations and excuses. 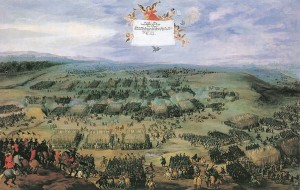 How does a religious society interpret such catastrophes? One response, certainly, is to imagine that the land is under judgment for its sins, and sometimes, to seek out scapegoats. Which groups, which individuals, which social trends, have so provoked the Lord of Hosts? 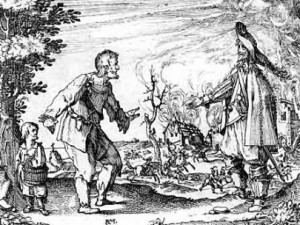 Scripture also obviously offers rich resources. Does not the book of Revelation precisely portray famine, plague death and war riding the land together? Wars and rumors of wars find close resonances in Daniel, Mark 13 and many other potential texts. They lend themselves easily to claims that nations are now entering the End Times.

The Bible implies repeatedly that the End Times would be ushered in by wars and rumors of wars. So why not the wars in which believers happened to be engaged at that particular time?

War naturally gives rise to apocalyptic rhetoric, often within established churches, otherwise in sects. A traumatized people is willing to give ear to messianic or prophetic expectations, to radical new spiritual movements. A nation laid low by disease and epidemics is very open to claims of healing, in both body and soul.

The existence of such upstart movements in turns provokes orthodox preachers to portray their leaders as false messiahs, as warning signs of coming Judgment. Again, Revelation becomes a practical textbook of political science.

With that framework in mind, we can think of some of the famous movements in American history. The early 1690s were a particularly grim time for New England, which had lost so heavily in recent wars against the French and Indians (the opening phases of King William’s War, 1688-97). New England virtually lost control of its northern frontiers in Maine and New Hampshire. Desperate attempts to pay the troops with worthless paper led to a financial crisis, which threatened the colony’s economic survival. It was at that point, in 1692, that ministers in Salem decided to pay unprecedented attention to rumors of conjurings, which in easier times they would probably have dismissed. Throughout the whole ensuing crisis we find the overwhelming sense of God’s judgment hanging over the colony. 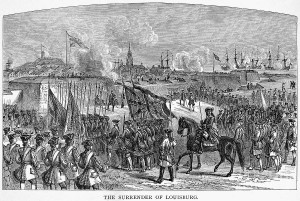 War again had its impact in the 1740s, with what Americans call King George’s War, the local manifestation of the War of Jenkins’s Ear [no relation!] and the War of the Austrian Succession. War affected the American colonies sporadically from 1739, and reached a savage intensity between 1744-46, with extensive Indian raids along the borders. By one estimate, the war cost Massachusetts alone some eight percent of its adult male population. 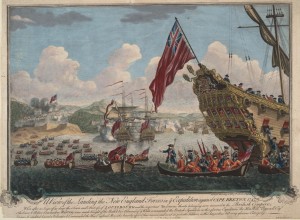 In religious history, of course, the 1740s marks a critical phase of the First Great Awakening, the years when the movement spreads and becomes institutionalized. (It was also the time of such extremist preachers as James Davenport).

Extremist sects again flourished during the Revolutionary years of the 1770s and early 1780s. War again coincided neatly with a religious upsurge during the mid-1840s, the time of the Mexican War and the great US expansion westward. This was a time of enormous religious excitement and apocalyptic expectation, boom years for Mormons, Shakers and Adventists, and for many smaller movements and sects, for Utopians and perfectionist communes. William Miller, incidentally, founder of Adventism, was a veteran of fierce fighting during the War of 1812.

Nor, of course, was this linkage with warfare confined to Christianity. In the 1640s and 1650s, the Ukraine was one of the world’s largest concentrations of Jewish communities, who were targeted for ruthless pogroms during the Khmelnytsky revolt. That catastrophe opened the way for the messianic movement of Sabbatai Zevi, whose notorious career starkly divided the Jewish world for decades to come.

November 4, 2013 WAR AND GOD’S KINGDOM
Recent Comments
2 Comments | Leave a Comment
"You're whistling in the dark."
Roger McKinney Do Evangelical Churches Have a Catechesis ..."
"And thank you. Yes indeed, many wrote against the enthusiasts and prophets of various types. ..."
philipjenkins 1708: Thus Is Religion Also Panic
"Thank you so much for this series, and I look forward to the book to ..."
GEVeith 1708: Thus Is Religion Also Panic
"Can you clarify??? So there is a Greek word used in the NT that can ..."
JohnQed It’s a Small, Small Complementarian World ..."
Browse Our Archives
get the latest updates from
Anxious Bench
and the Patheos
Evangelical
Channel
POPULAR AT PATHEOS Evangelical
1