Personality-Driven Leadership in the Local Congregation

In my last post, I suggested that the evangelical embrace of personality-driven leadership forms the backstory to the Mark Driscoll-Janet Mefferd imbroglio over plagiarism.  Several commentators on the blog raised astute questions regarding the pervasive nature of this aspect of American evangelicalism.  After all, doesn’t personality-driven leadership characterize evangelicalism in local congregations, not just mega-ministries led by a “celebrity pastor?”  Radio host John Hall of Pittsburgh’s Word FM raised a similar question on The Ride Home when we spoke last week.  (You can listen to that interview here.) It is a worthy topic to investigate, one whose roots can be traced back to the colonial period. 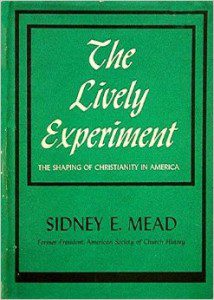 As the American colonies congealed into a new nation, the founders undertook a “lively experiment.”*  The new nation refused to establish an official state church–or religion for that matter–allowing its citizens much greater freedom to determine their own religious affiliations than had been the case in Europe.  The young nation codified this commitment in the First Amendment to the U.S. Constitution.  No longer would one particular religion–or denomination for that matter–be given an overwhelming competitive advantage over others.  Rather, various groups would compete for adherents in the emerging American religious marketplace.  Through the majority of the nation’s history, these groups were largely Christian. 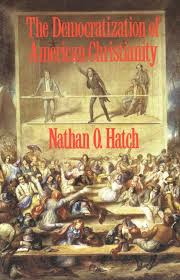 By the mid-nineteenth century, American Christianity had been “democratized.”**  In this newly established American marketplace, the people, rather than elites, would decide which religious groups would thrive. A group’s survival depended upon its ability to connect with the people and persuade them to embrace its particular brand of Christianity.

Evangelical groups flourished in this environment as leaders turned their penchant for appealing directly to the people in matters of conversion towards building up their particular denomination, ministry, or congregation.  The democratization of American Christianity meant that the people were the final arbiters of religious success.  Thus, groups had to appeal to the people, and the people had to find them appealing.  As a result, religious groups found success inasmuch as their charismatic leaders found success in promoting their cause.  This trend continues to the present day, trickling up from local congregational leaders to multi-site mega-churches, and a multiplicity of other ministries.  Rarely does a church or ministry find numerical success without a charismatic leader who can connect with the people in person, via audio, and in video formats.

The reality of charismatic, personality-driven leadership functions at all levels of ministry in American evangelicalism, including the level of the local congregation.  With some exceptions, evangelical laypeople choose a church based upon the pastor.  Denomination and doctrine matter to some extent for some people, but the person of the pastor matters most for most people.  Those who prefer an affable, personable leader choose a church with an affable, personal pastor.  Those who like a somber, serious-minded preacher choose one that suits their tastes.  True to form, the choice lies with them, not the bureaucracy of a parish system.

This systemic reality functions to empower the people while simultaneously putting them under the persuasive power of a charismatic pastoral leader.  In evangelical churches, such leaders often accumulate significant power over time.  At first, this power comes through their personal charisma and powers of suasion.  However, as the congregation grows numerically, procedural and governance practices that protect the pastor from criticism and critique are implemented.  Sometimes, this takes the form of an executive pastor who functions as a gate-keeper, protecting the pastor from the criticism (legitimate or not) of the people.  Other times, this takes the form of a carefully selected church council or board of elders.  The growing scope of the ministry “demands” efficiency and these changes provide the pastor freedom to act decisively, leading quickly and efficiently.  At the same time, they exacerbate the problems latent in personality-driven leadership as they create an echo chamber around the pastor, isolate him from the people, and eventually set him up as an untouchable celebrity.

A perfect solution to this challenge does not exist.  More hierarchical structures bring their own problems.  Yet there are steps that can be taken–by rank-and-file evangelicals and their leaders–to help mitigate these challenges.  First, no matter how much they love their charismatic pastor, evangelical laypeople need to insist on the transparency of governing processes and accountability for leaders in their congregations.  Second, local church leaders need adopt a long-term vision that looks beyond their tenure by putting into place structures of accountability that will work to guarantee integrity and accountability in their congregations–even if it means less efficiency for them in the short-term.  This takes an incredible amount of fortitude, patience, and humility.  After all, what charismatic leader wants to spend time on developing processes that slow down the implementation of their vision? And yet, by doing so, His kingdom is best served–even if theirs is not.

December 17, 2013
How to Publish a History Book
Next Post

December 19, 2013 The Latter-day Saints and Anti-Polygamy Laws
Recent Comments
2 Comments | Leave a Comment
"https://archive.org/embed/s... … I think we all should properly deal with the books like this one ..."
mcepl The Myth of the Men-Stealers
"As long as they keep strictly to God/Jesus 66 books of scripture."
D.M.S. A Very Not-So-Merry Christmas: How Protestantism ..."
"Informative and interesting. Thank you. This raises questions about the term Protestant Reformation."
the old scribe How the English Reformation was Named: ..."
"Thank you for the insights. As you pointed out, technology has been a two edged ..."
the old scribe Is Religion Naturally Averse to Technology?
Browse Our Archives
Related posts from Anxious Bench