In Catholic intellectual circles right now, the peripheral has become quite central.

Since his term in office began, Pope Francis has turned often to the concept of the periphery, a term that for him has a rich assemblage of meanings. You can expect to hear the word surfacing repeatedly in religious discourse – and we are only beginning to understand how radical some of the implications might be. 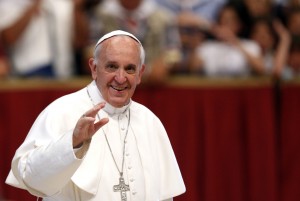 I have a special interest in this topic because much of my own writing concerns the relationship between core and periphery, in the sense of traditional and newer centers of growth and activity within Christianity. In a simple geographical sense, Francis himself comes from the periphery, in the sense of being the first non-European pope in many centuries. The shift in Catholic numbers and influence outside Europe and North America is very familiar within Vatican circles these days, and that accounts for one level of interest.

Francis, though, uses “peripheral” in other ways, always positive. He warns the church not become so fixated on the center that it neglects the periphery – those people who live on the edge of mainstream society, whether within the economically advanced nations, or globally. That “edgy” quality might result from poverty, from racial categories, or from sexuality and life-style. Although not calling for any kind of relativism, he urges the church to reach out to everyone.

When his papacy began, Francis was quoted as saying that

By the way, you may well see this and other quotes in variant forms, as they are given in multiple translations, some non-official.

In the statement Evangelii Gaudium, Francis writes that

Each Christian and every community must discern the path that the Lord points out, but all of us are asked to obey his call to go forth from our own comfort zone in order to reach all the “peripheries” in need of the light of the Gospel.

In a philosophical sense too, he cautions against seeing the world through the lens of one narrow ideological scheme. Flexibility is all. A wise thinker, he says, needs to see things from multiple perspectives, from the edges:

I am convinced of one thing: the great changes in history were realized when reality was seen not from the center but rather from the periphery. It is a hermeneutical question: reality is understood only if it is looked at from the periphery, and not when our viewpoint is equidistant from everything. Truly to understand reality we need to move away from the central position of calmness and peacefulness and direct ourselves to the peripheral areas. Being at the periphery helps to see and to understand better, to analyze reality more correctly, to shun centralism and ideological approaches….

It is not a good strategy to be at the center of a sphere. To understand we ought to move around, to see reality from various viewpoints. We ought to get used to thinking. ….

Nor should the center try to impose its views on what it sees (rightly or wrongly) as the periphery:

Here our model is not the sphere, which is no greater than its parts, where every point is equidistant from the center, and there are no differences between them. Instead, it is the polyhedron, which reflects the convergence of all its parts, each of which preserves its distinctiveness.

I might add that what one generation sees as the edge might come to be central in later years. There was a time when Northern Europe was a distant frontier region of the civilized Mediterranean world, and its Christian churches were highly peripheral. Things do change.

To see these ideas in practice, this is a report of a recent papal pastoral visit:

Pope Francis made a pastoral visit to Rome’s Sacro Cuore Basilica on Sunday afternoon, in the context of the Church’s 100th annual World Day for Migrants and Refugees. The parish of the Basilica dedicated to the Sacred Heart of Jesus is run by the Salesians of Don Bosco, and operates an outreach to the city’s homeless and itinerant populations, as well as a centre of welcome and hospitality for more than 400 young refugees and asylum seekers from Somalia, Eritrea, Gambia, Cameroon, Ghana, Congo, Ivory Coast, Afghanistan, Iraq, Iran, Kurdistan, Egypt, Syria, Sudan, Pakistan and Turkey. Located in the heart of the city, in the vicinity of Rome’s central Termini railway station, the Basilica parish serves one of those “existential outskirts” that Pope Francis has called on Christians in every state of life – and especially those in religious life – to place at the centre of their work and witness in behalf of the Gospel.

Note that periphery is here translated as “outskirts” but we might play with other colloquial translations. Seriously, how about “the boonies”, the sticks? Living life at the edge? In Romance languages, the word is more common than in English. In France, for instance, the notorious ring road circling Paris is the Boulevard Périphérique.

Like many recent Biblical scholars from the Global South, Francis bases his “peripheral” principles in the life of Jesus:

The fulfillment of the evangelical command ‘Go to the whole world and proclaim the Gospel to every creature’ (Mk 16:15) can be accomplished with this hermeneutical key shifted to the existential and geographical periphery. It is the most concrete way of imitating Jesus, who went toward all the peripheries. Jesus went to all, really all. I would not really feel uncomfortable going to the periphery: you should not feel uncomfortable in reaching out to anyone.

The interview in which Francis presented these insights was appropriately titled “Wake up the World!”