I posted about the deadly Japanese persecution of Christians in the thirty years or so after 1614, and how this violence effectively destroyed organized Christianity in that nation. In 2014, we are commemorating the four hundredth anniversary of the beginning of the worst of the persecution.

In describing Japanese acts against the Christians, I am not of course denying that contemporary Christians could be just as brutal in their way. Coincidentally, 1614 also marks the culmination of Spain’s expulsion of its Moriscos, former Muslims who had accepted conversion to Christianity. In Germany, meanwhile, the same year saw anti-Jewish riots. Intolerance, obviously, was the prerogative of no one faith.

Japan, though, was extremely efficient in its repression. Please note that the following account includes some gruesome descriptions, which I am reporting in detail because they are essential to understanding the story.

Although we naturally pay most attention to the spectacular acts of mass martyrdom, such violence in its own right need not be absolutely destructive. We remember the saying that “the blood of martyrs is the seed of the church.” Much more effective in the long term is systematic repression associated with intense surveillance and police work, which really does ensure that a crushed church cannot rise again. The Japanese were brilliantly successful at such policies. Much like modern-day totalitarian regimes, they ran a superbly effective mechanism of repression and thought control. They offer a terrifying model of the means by which a faith – any faith – truly can be destroyed.

Japan had a long tradition of effective magistrates and policing, far superior to anything the Inquisition had ever operated in Europe. Already by the 1630s, an extremely modern-sounding security apparatus sought out Christians by means of “letters, pictures [wanted posters], secret agents, road check points and border controls.” Governments deliberately sought out dissidence and subversion, while the reforms of the shogun Hideyoshi reforms relied for their enforcement on mutual denunciation.

In 1629, the government made it even more difficult for Christians to escape public notice when they introduced the fumie, requiring all Japanese to trample upon the crucifix or an image of Mary, an act that no Christian could do in good conscience. 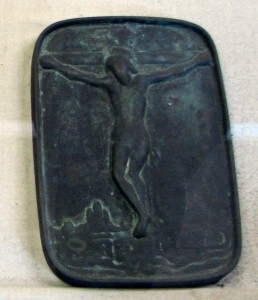 In 1636, an edict laid down rules for the investigation of alleged Christians, offering two or three hundred pieces of silver for information leading to the capture of priests, bateren (that is, padres). Smaller rewards were available for lay believers.

A hundred years ago, the Catholic Encyclopedia asserted that, “There is not in the whole history of the Church a single people who can offer to the admiration of the Christian world annals as glorious, and a martyrology as lengthy, as those of the people of Japan.” But the story was more complex than a straightforward tale of brutal terror and heroic resistance. When suspects were found, authorities placed immense pressure on them to renounce their views, to recant their deviant religion, and to assert their loyalty to orthodox Japanese principles.

The deep concern with public repentance is a well-known feature of Japanese society, which became a critical element in campaigns against unpopular religions. Recantation by clergy and other leaders allowed the public to see the weakness of the minority faith, without creating heroic martyr figures.  Moreover, such apostates were in an excellent position to deliver embarrassing testimony about the deviant faith, which they knew from the inside.

The need for public apostasy shaped the penalties inflicted upon Catholic clergy in Japan. Jesuits in particular were trained to expect persecution and martyrdom, and brave individuals could contemplate the threat of a speedy death, and the crown of martyrdom. Quite different was the treatment they received in the ana-tsurushi, the pit, a favored device of Nagasaki governor Takenaka Uneme:

One grotesque example was the ana-tsurushi, the torment of the pit,

The victim was hung from the cross beam of a gallows, head downward, into a pit five or six feet deep. The body was tightly bound in order to slow down the circulation of the blood. The holes were sealed off with planks about the victim’s loins. The pits were often partly filled with offal. There in those black holes many hung for as long as a week, exuding blood from mouth and nostrils, maddened by the fearful pressure on the brain, until death released them from almost unsupportable anguish.

This became the favored means of punishment in the 1630s:

In order to prevent a speedy death… by congestion, to prolong the torture and give more chance to recant – Takenaka wanted apostates rather than martyrs – often the victim’s temples were pierced. Some who had recanted under this torture later declared that neither the pain caused by burning with fire nor that of any other torture, deserved to be compared with the agony produced in this way.

Magistrates proved adept in deploying psychological tactics, exploiting the ideological assumptions of the clergy themselves, and their boast of exercising fatherly care over their flocks. Courageous priests might be able themselves to withstand appalling physical torment, but still more disturbing was the threat that their native converts might suffer death or torture, unless the clergy conceded defeat.

Official pressures often succeeded in leading Christians, Europeans and Japanese, to recant or apostasize, In so doing, they not only ceased their own resistance, but condemned the faith. Ingeniously preventing apostates from holding secret mental reservations, the authorities required signatories to confirm their words by a double set of weighty oaths invoking the threat of hell, one Christian (assuming they might still harbor Christian sentiments), the other Shinto or Buddhist.

The most notorious apostate was Cristóvão Ferreira, the Portuguese–born leader of the Jesuit mission until his arrest in 1633, when he apostasized while undergoing the pit. Like others, he confessed that the Christian religion was only a subterfuge that promoted European plans for world conquest. Presumably, he was agreeing to everything his interrogators proposed to him, and even elaborating. Assuming a Japanese name and identity, he married and worked as a translator, remaining in Nagasaki until his death in 1650. His defection offered multiple benefits for the authorities, by discrediting the European priests, and destroying their credibility among the social elites. Henceforward, Christianity would survive in the grass roots, or not at all.

Ferreira’s case also provided a powerful example for other clergy facing persecution. Even the most heroic priest sentenced to the pit must have been tempted by the prospect of signing the documents that would allow him to retire comfortably to Nagasaki. Ferreira’s apostasy was a devastating blow for a Catholic Europe that was now thoroughly used to hearing about the heroic deeds of martyred priests.

Some apostates became active enemies of their old faith. Ferreira was notorious as a skilled interrogator of Christian captives, and he wrote a polemical tract (in Japanese) against Catholic Christianity. From 1610 to 1630, the main enforcer of anti-Christian policies was Takenaka’s deputy Heizo, a defector from the Christian faith. In the 1640s, the most fanatical Christian-hunter was Inoue Masashige, another former Christian. Although he held the rank of Inspector General, scholars often translate his title quite appropriately as Inquisitor.

Such stories have attained global visibility through the novels of Japanese Catholic writer Shusaku Endo, who many regard as one of the greatest Christian writers of modern times. In books like Silence, Endo demonstrates his fascination with issues of loyalty and betrayal, and the great persecutions offered him rich resources. Silence itself focuses on a Portuguese priest drawn to Japan by the desperate need to find the truth behind Father Ferreira’s defection. (Martin Scorsese has reportedly been on the verge of making a film version of Silence for about a decade now, but hopes are running low…)

Japanese Christianity faded not because it was somehow destined to do so, but because it was throttled shortly after its birth. As one of Endo’s Jesuit characters protests, “It is not that it does not take root. It’s that the roots are torn up”.

I’m looking forward to addressing some of these issues in the graduate course on Global Christianity I am currently teaching at Baylor. 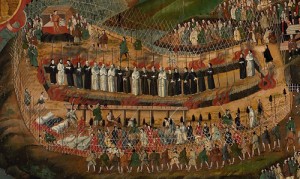 Incidentally, this story is the subject of some magnificent contemporary art, which it is hard to reproduce here. You can though see one painting in detail at the wikimedia site.

February 11, 2014 How to Stop Fiddling Around and Start Writing
Recent Comments
16 Comments | Leave a Comment
"Convincing evidence of discrimination remains elusive..... because it's a myth.I'll quote the beginning of the ..."
Ray Is There a Theological Reason for ..."
"My response in which I cited the authority I use in teaching this material has ..."
jekylldoc Is There a Theological Reason for ..."
"I apologize for mischaracterizing the origins of the Missouri Synod of the Lutheran church. This ..."
jekylldoc Is There a Theological Reason for ..."
"if your god can't write or dictate a holy book that doesn't need to be ..."
crackerMF St. Francis and the Climate Apocalypse
Browse Our Archives
get the latest from
Anxious Bench
Sign up for our newsletter
POPULAR AT PATHEOS Evangelical
1