The End of Religious Freedom?

What is religious freedom? Is it the freedom to worship or otherwise interact with God, gods, or other things and entities as one sees fit? Is it freedom of conscience in terms of the supernatural? If religious freedom also involves the right to live out one’s religion in the public sphere, how far does that right extent? If religious freedom involves the right of churches (and like organizations) as well as individuals, to what extent do they operate independently of state control? Steven D. Smith’s The Rise and Decline of American Religious Freedom is an elegy for an expansive understanding of the “first freedom” protected by the First Amendment.

Smith intends to dismantle what he terms the “standard story” of the history of religious freedom in the United States. In this version of U.S. History, the founders wrote Enlightenment-inspired separationist principles into the Constitution, nineteenth-century Americans departed from them and oppressed a host of religious minorities, liberal justices after 1945 rediscovered the correct interpretation and application of the First Amendment, and evangelical theocrats mounted a failed efforts to return to the bad old days. 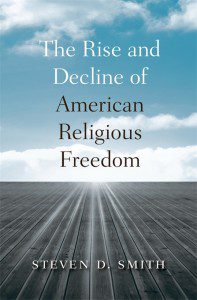 In Smith’s “revised version,” early Christians paved the way for religious freedom by privileging the individual’s interior relationship with God and by suggesting that church and state operated within separate jurisdictions. The Enlightenment “served as a conduit” for importing these Christian principles into the American republic. Although there was some discrimination against minority religions, Smith sees the first century and a half of U.S. history as a “golden age” in which Americans pragmatically lived under an “open contestation” between providential and secularist interpretations of the Constitution. Then, in an understandable search for consistency and constitutional principles, the modern Supreme Court rejected that settlement and raised the secularist principle of neutrality to an axiom. That consistency has often proved elusive, however, leaving both providentialists and secularists frustrated, the former because their views “have been officially declared heretical” and the latter “because of what they see as a failure to live up to secularist commitments.” Now, Smith suggests, the nation is blindly hurtling toward “the conclusion that there is no justification for giving special protection to religious freedom” and that to make exemptions for religious freedom “seems to some theorists to discriminate in favor of religion … and thus to violate fundamental commitments to equality.”

This is an important book. I recommend reading it in comparison with David Sehat’s Myth of American Religious Freedom, which arrives at a rather different conclusion. Sehat’s view of the nineteenth-century unofficial Protestant establishment is far darker than Smith’s. Sehat agrees with Smith that post-1945 justices blatantly applied their own wishful thinking to the views of the founders, but — unlike Smith — he feels that through their invention of a separationist founding and early republic “they have given up the most compelling argument for their own jurisprudence, which was originally to liberate the individual from religious oppression that used the apparatus of the state.” In short, Sehat largely embraces the separationist and egalitarian jurisprudence criticized by Smith.

The most provocative section of Smith’s book comes in his discussion of a contemporary struggle between “equality” and “religious freedom.” Formerly allies, the two concepts — as articulated by certain advocates — now find themselves at odds. As Smith explains, whereas many earlier Americans linked fundamental equality to the creation of all human beings “in the image of God,”  modern exponents of equality “usually do not invoke religious [or any] justification for the claim of equal worth.'” Moreover, proponents of certain forms of equality in particular strongly view “religious liberty as an obstacle to their objective,” because because groups and individuals use claims of religious freedom to justify the unequal treatment of women, gays and lesbians, and others. Smith continues to argue that “traditional religion” and “contemporary secular egalitarianism” are fundamentally incompatible. He suggests that secular egalitarianism “resembles a secular version of Christendom, under which it was assumed that government should act on and impose a favored orthodoxy.”

I think there will be bitter conflicts between secularists and traditionalists over the coming years, as there have been for decades now. And traditionalists will probably lose most of those battles. The tax-exempt status for colleges and universities that forbid homosexual relationships or in any other way discriminate against gay and lesbian students? Should the IRS choose to revoke such institutions’ tax-exempt status, I do not see how the Supreme Court could do anything but affirm that decision (on the basis of the 1983 Bob Jones case). Adoption agencies run by religious organizations? Egalitarianism will trump pluralism and certain forms of religious freedom.

Still, I think some of this struggle is overblown. Ten years ago, slightly deranged commentators suggested that the United States was on the verge of being taken over by evangelical theocrats. Today, the rhetoric on the other side suggests that the contemporary Democratic Party is bent on relegating all religious expression to the private sphere. Certainly, there are a small number of fervent theocrats and a probably somewhat larger number of ardent secularists out there. Still, I hardly think the bulk of today’s Democratic Party or progressive movements are bent on defining away religious freedom (even understood somewhat expansively), and as Smith notes, the Supreme Court batted away an Obama administration challenge to expansive “ministerial exemptions.” Moreover, given the very “myth” of American religious freedom well described by David Sehat, most Americans continue to cherish the idea of religion’s free exercise.

March 14, 2014 A WIDER WORLD
Recent Comments
39 Comments | Leave a Comment
Browse Our Archives
get the latest from
Anxious Bench
Sign up for our newsletter
POPULAR AT PATHEOS Evangelical
1