Two years ago, I posted an interview with Matthew Bowman, a preview of a book that has now appeared as The Urban Pulpit:New York City and the Fate of Liberal Evangelicalism. 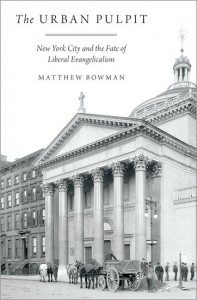 Bowman argues that the fracturing of evangelicalism in the late nineteenth and early twentieth century is best understood as a response to the crisis of the city. That sounds familiar enough on the surface. But Bowman’s Orsi-inspired approach is unique. For him, evangelicalism should be seen as a religious style, a “set of behavioral expectations and methods of practice” rather than a “coherent theological proposition” (p. 10).  Bowman zeroes in on three elements that united evangelicals in the nineteenth century: conversion (although there were competing notions about this process), a desire to interact with God through language, and an emphasis on the preached sermon and the read Bible as the means towards that end.

– The fracture of an even semi-united Protestantism into its subsequent modernist/liberal and fundamentalist factions is not new, but Bowman tells the story with originality and clarity. All Protestant leaders were alarmed at the way that Catholic immigrants had transformed American cities such as New York and grasped for ways to maintain their traditional leadership. Although the two developing camps as late as the early 1900s still occupied considerable common ground, proto-fundamentalists redoubled efforts to verbally proclaim the Word to lost souls whereas proto-liberals sought new ways to embody Christ’s love through social service.

– Bowman’s book makes me think of Chris Gehrz’s post (which came to me via John Fea’s blog) about the “New York-centrism” in “evangelical cultural engagement.” The significance that evangelicals placed on cities such as New York (and perhaps on New York above all others) has a very long history, clearly. It might be interesting to compare explicitly the late-nineteenth-century experiences of Protestants on the periphery with those at the “center of culture.”

March 31, 2014 Embryos Unbound
Recent Comments
1 Comment | Leave a Comment
"And yet there is not 1 place or word in the Bible that condemns abortion ..."
KDNDLKJ Why Do White Christians Find It ..."
"Forced birth is not the same as pro-life. The unborn are easy to love, easy ..."
JamieHaman Why Do White Christians Find It ..."
"Perhaps a more generous interpretation of the actions of this pastor could be that he ..."
AHH The Cost of Staying Silent
"Wasnt Pauls point in Romans 14 about eating meet or not that both sides should ..."
Roger McKinney The Cost of Staying Silent
Browse Our Archives
get the latest from
Anxious Bench
Sign up for our newsletter
POPULAR AT PATHEOS Evangelical
1