Jay Beaman, a sociologist at Warner Pacific College in Portland, Oregon, likes to do historical experiments. After extensive research he sends emails to members of Ancestry.com, telling them that he has found a relative of theirs who claimed religious objection on their World War I draft card. These relatives were members of holiness and Pentecostal denominations. Their descendants typically have no idea of the pacifist commitments of their grandparents and usually write back to Beaman saying that he surely must be mistaken. Even after seeing proof, they’re sometimes still not convinced. The historical memory of pacifism has been obliterated in holiness and Pentecostal circles. 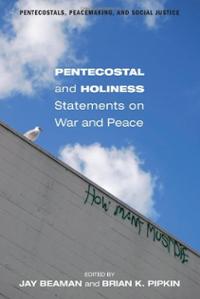 It turns out that principled pacifism is not the sole province of Mennonites. Beaman and Brian Pipkin have uncovered a wealth of documents that testify to the peace commitments of other American religious groups. They have compiled them in a sourcebook entitled Pentecostal and Holiness Statements on War and Peace (2013). Consider this 1844 source from the Wesleyan Methodist Church: “[The gospel] is in every way opposed to the practice of War in all its forms; and those customs which tend to foster and perpetuate the war spirit [are] inconsistent with the benevolent designs of the Christian Religion.” The St. Lawrence Annual Conference of the Wesleyan Methodists even considered a resolution to “alter the denominational Discipline so that refusal to engage in war and military training would be come a condition of membership.” There are hundreds more such statements ranging from the Brethren in Christ, the Allegheny Wesleyan Methodist Connection, Church of God (Fort Scott, Kansas), Church of the Living God, Church of God (Anderson), Church of the Nazarene, Congregational: Broadway Tabernacle, Emmanuel Association, Free Methodist Church, and the Salvation Army.

The statements are diverse, representing numbers of John Howard Yoder’s twenty-nine distinct types of pacifism as described in Nevertheless: The Varieties and Shortcomings of Religious Pacifism. Some documents denounced any law that supported warfare, such as paying war taxes or working for war-related industries. Others drew the line at actual killing. Still others contended for “personal nonresistance,” citing Romans 13 and saying that the state had the authority to prosecute war, but that they couldn’t personally participate. Binding each of the statements together was biblicism, defined by Christian Smith as a “theory about the Bible that emphasizes together its exclusive authority, infallibility, perspicuity, self-sufficiency, internal consistency, self-evident meaning, and universal applicability.” In a very helpful introduction to the volume, Beaman describes the biblicist case for pacifism in great depth. In short, these holiness writers made a very serious attempt to “harmonize inconsistent passages across the Bible.”

The harmony sounded very different as the twentieth century progressed (or regressed, depending on your perspective). In a 1915 statement called “Peace,” the Wesleyan Methodists backed away from their earlier full-throated denunciation of violence. It read, “Human War is undoubtedly the product of human sin, but it does not necessarily follow that all who engage in war are sinners.”

Why the shift? Beaman contends that social pressure was probably most important. Most of the new statements, including the Wesleyan one from 1915, came in the midst of war, precisely when holiness pacifists felt most beleaguered by criticisms of bad citizenship. They were a minority group—7/10 of one percent of the draft pool for WWI registered a religious objection compared to two-thirds of the pool who declined to fight to instead support their family. Remarkably, almost 90% of the 4.9 million married men in the first draft received deferments.

Other explanations include a decrease in separatism and a rise in social mobility. Beaman draws on the Weberian argument that self-denying, ascetic groups experience upward social mobility, which eventually results in a more worldly and sophisticated orientation. This appears to be how worldly wise contemporary holiness and Pentecostal adherents typically dismiss the pacifism of their hayseed ancestors. Consider this quote from a third-generation Pentecostal: “Early day Pentecostals had all kinds of rules of what you couldn’t do. You couldn’t drink a coke or wear a tie or you would get kicked out of the church. Conscientious objection was one of those rules which over time Pentecostals gave up following, just like not drinking coke or wearing a tie.”

sts would have objected to this narrative that equated pacifism to a soft drink. They would have invoked a sacred text. In 1898 on the eve of the Spanish-American War, Francis Brown wrote to the denominational magazine of the Church of God (Anderson, Indiana). He asked “Please answer through the Gospel Trumpet: Providing there should be War in the United States, would it be right for a holy man of God to go as a soldier?” The editors responded, “We answer no. Emphatically no. There is no place in the New Testament wherein Christ gave instruction to his followers to take the life of a fellowman.”