Traditionally, summer is the time for reading lists.  In honor of that tradition, I present the following post.

Among Anxious Bench authors, I am a bit of an anomaly.  My colleagues on the blog–Agnes Howard, Tal Howard, Thomas Kidd, Philip Jenkins, David Swartz, and John Turner–all hold positions in history departments.  I teach in a theological seminary, something that brings unique rewards but also concomitant challenges.

Like all professors, I face the challenge of assigning books that will pique and hold student interest while covering the necessary material.  In some ways, my task in this regard is easier than my fellow Anxious Bench bloggers as my students possess occupational homogeneity, pursuing some variation of Christian ministry as their vocational calling.  Most of them plan to minister in America.  With this in mind, in several classes, I try to assign books that help them situate their current ministry moment in the larger context of American religious history.  (I also try to allow latitude in some assignments that allow others who will be ministering abroad to embrace their particular interest.  Last semester, for instance, I had an ambitious student who will minister in Asia read read all 700+ pages of Samuel Moffett’s A History of Christianity in Asia, Vol. 2 !)

At the confluence of summer reading lists and American religious history books, I offer the following list (in no particular order) of Five American Religious History Books Every Evangelical Minister Should Read.

1) A Short Life of Jonathan Edwards (2008) by George Marsden.  In this brief volume (172 pages), Marsden traces the life of Jonathan Edwards, arguably America’s greatest pastor-theologian.  He manages to situate Edwards in his cultural context, while simultaneously taking his religious beliefs seriously.  In so doing, Marsden introduces readers to colonial New England and the manner in which theological conviction can profoundly shape a ministry.  Pastors will be struck with manner in which Edwards struggled with the same things they do today, while all evangelicals will gain insight into the conflict between embracing revival and avoiding manufactured religious experience.  Readers looking to delve more deeply into Edwards’ life can follow up by reading Marsden’s Bancroft Award-winning Jonathan Edwards: A Life (640 pages).  Those looking for more on the warp and woof of ministry in Colonial New England over several generations can tackle Harry Stout’s densely insightful The New England Soul (1986, 2011).

2) Through the Storm, Through the Night: A History of African American Christianity (2011) by Paul Harvey.  In light the racialized nature of American society, every evangelical minister needs to have a basic grasp of the history of African American Christianity.  Drawing on a plethora of other works, Harvey presents that history in a succinct, readable form that begins in Africa and ends in the present.  White evangelicals should come away with greater understanding of some things of which most are ignorant, while all readers will be inspired by the vigor and persistence of the African American embrace of Christianity.  As a bonus, primary sources documenting African American religion follow Harvey’s short 138 pages.  Albert Raboteau’s Slave Religion (1978, 2004) remains a classic in the field, although it may be too technical as a primer.  Non-specialists should read Harvey’s book first.

3) Was America Founded As a Christian Nation?: A Historical Introduction (2011) by John Fea.  Former Anxious Bench blogger John Fea provides a largely even-handed approach to the question posed in the title, something that few works on this volatile topic manage.  A respected historian and committed Christian (with an M.Div. from TEDS!), Fea correctly steers a middle path between evangelical and secular revisionists.  At 304 pages, this book is one of the longer ones on the list, but ministers who want to avoid the politically-motivated pitfalls surrounding “Christian America” should read it.  Although not strictly historical in approach, readers desiring to engage this topic further might consider One Nation Under God? An Evangelical Critique of Christian America (2001) by my colleague, John Wilsey.

4) The Democratization of American Christianity (1989) by Nathan O. Hatch.  Somewhat provocative at the time it was published, Hatch’s thesis about the democratizing effect of non-establishment in the early American Republic now virtually defines the way historians think about the American approach to religious free practice.  According to Hatch, as the implementation of republican principles in the new nation empowered common people in the political arena, that same ethos empowered laity across diverse religious groups.  No longer able to depend on the backing of the state church, religious leaders found it necessary to “connect with the people” in order to succeed, inaugurating a religious populism that birthed a whole host of uniquely American religious trajectories–some positive, others detrimental.  For those who like biography, John Wigger’s American Saint: Francis Asbury and the Methodists (2009) compliments Hatch well.  Although he created a hierarchical structure, Asbury–and the Methodist ministers under him–connected with “ordinary people.”  For a challenge to Hatch’s work, read Conceived in Doubt (2012) by Amanda Porterfield. 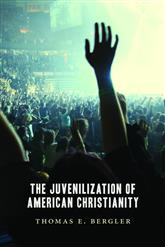 5) The Juvenilization of American Christianity (2012) by Thomas E. Bergler.  Although not as well-known as some of the other books on this list, I consider Bergler’s work critical for evangelical ministers.  Bergler, a student ministry practitioner as well as a scholarly expert on the history of ministry to young people, traces the manner in which ministry to young people changed over the course of the twentieth century.  As the new category of “youth ministry” began to emerge in the 1930s and 1940s in order to address the “youth crisis,” a no-methodologies-barred approach to ministry developed.  Positively, these techniques, which gained traction in the 1950s, reinvigorated American Christianity.  Negatively, they led many churches and parachurch organizations to “market” ministry, an approach that eventually caused a shallow, juvenile form of Christianity to permeate all age groups in America, not just teens. Bergler’s book helps give historical context to the quandary that troubles many ministers: why are my people so spiritually shallow when things are so exciting around here?

Of course, no list of this sort is perfect, and every list of this sort generates discussion. I’ve obviously passed over some very fine books (and even topics) in narrowing this list to five, so I’m eager to hear from readers regarding what books they feel should have made the list?  And which book they would replace?

June 17, 2014
Phillis Wheatley and the Evangelical Anti-Slavery Movement
Next Post

June 19, 2014 Have Visions Ceased?
Recent Comments
11 Comments | Leave a Comment
"We are privileged to be living in an era where education is realizing its potential ..."
Dr.Cajetan Coelho Martin Luther King, Jr. and the ..."
"Make a claim and we’ll see. Your comment above is a wish, not a claim. ..."
odgie Moon Gaffney and Catholic History
"Yet you haven't refuted my claims. Then again that requires a brain, something you Aryans ..."
Christian Moon Gaffney and Catholic History
"RE: Dreher's The Benedict Option. Haven't we gone down this pathway before with the separatist ..."
stefanstackhouse What Were We Thinking? A Brief ..."
Browse Our Archives
get the latest from
Anxious Bench
Sign up for our newsletter
POPULAR AT PATHEOS Evangelical
1