In The Erosion of Biblical Certainty (not exactly bargain priced, so the Anxious Bench pursues its vision of social justice by summarizing it for you here), Eastern University’s Michael J. Lee narrates the early period of this story, revising what he considers the standard narrative: “that the understanding of the Bible as a supernatural text conveying both spiritual and historical truths came under devastating assaults from the natural sciences and German historical critics in the nineteenth century.” Amid constant, withering attacks from German scholars and their American followers, “the image of the Bible as a supernaturally inspired and infallible text eventually crumbled under the relentless assaults of secularizing forces.” Lee argues that “the road to skepticism was ironically and unintentionally paved by the Scriptures’ defenders.” Those defenders argued that the Bible met standards for historical reliability and then found their arguments irrelevant or unpersuasive when those standards shifted. As the Bible’s defenders accommodated themselves to “objective” and empirical grounds, they altered “their own notion that the Bible was a timeless and unchanging revelation.” 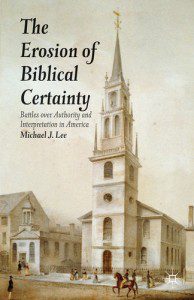 Lee argues not that his Protestant subjects (Joseph Buckminster, Jr., Andrews Norton, and Moses Stuart would be theologically diverse examples) were foolish. They were doing their best to defend scripture from its skeptics. Their responses, however, proved tragic, because the Bible could not become “something comprehensible by the natural tools of investigation.”

Lee imagines an alternative past, in which American Protestants responded to the crisis of biblical criticism by adhering to their tradition’s insistence that only divine intervention enabled human beings to understand God’s revelation. Nor did Luther and Calvin, according to Lee, view the Bible as a storehouse of historical or scientific facts. In earlier Protestant understandings of the Bible, in other words, a “few minor historical inconsistencies” were indeed minor.

While reading Lee’s The Erosion of Biblical Certainty, I thought again of Mark Noll’s excellent chapter on biblical study in his Jesus Christ and the Life of the Mind. Noll quotes an 1894 essay by B.B. Warfield, in which he laments that many Christians see the divine and human aspects of Scripture “as lying over against each other, dividing the Bible between them; or, as factors in inspiration, as striving against and excluding each other, so that where one enters the other is pushed out.” Thus, a zero-sum game emerges. If one acknowledges the prejudices of a biblical author or editor against neighboring peoples, then it becomes more difficult to see the divine nature of a section of biblical history. If later, much later, generations of scholars edited and combined texts we now see as the Pentateuch or Isaiah, then our sense of divine revelation might diminish.

Warfield, by contrast, insists that we see the Bible as a “divine-human book, in which every word is at once divine and human.” He continues that “the Scriptures are the joint product of divine and human activities, both of which penetrate them at every point, working harmoniously together to the production of a writing which is not divine here and human there, but at once divine and human in every part.” I would probably go farther than Warfield and suggest that there are sections of scripture in which human imperfections have partly obscured or distorted divine revelation, but his — and Noll’s — warning against zero-sum reasoning would have greatly aided the biblical scholars discussed by Michael Lee.

Noll continues by engaging Peter Enns’s Inspiration and Incarnation because of the latter’s christological approach to the Bible. It’s not coincidental that Christians identify “Christ the word and scripture the word.” We encounter Christ, the Word of God, through the Bible (among other places). Thus, the Bible reflects Christ’s full humanity and full divinity. Christians must retain their confidence in the Bible’s divinity while receiving ever more (if still highly uncertain and fragmented) knowledge about the historical and textual background of scripture.

It’s obvious, though, that many Christians, scholars and otherwise, have long struggled to simultaneously uphold the Bible’s humanity and divinity. Indeed, the intellectual challenges posed by historicism and the rise of various forms of biblical criticism evolve without disappearing. There is no simple solution for Christian believers to these challenges, only a faithful encounter again and again. Still, the advice by Warfield, Enns, and Noll is, from my vantage point, sound, and it works for me (most of the time). For many Christians, however, it is much harder in practice than in theory to draw back from zero-sum reasoning. That challenge, however, makes sense. It is impossible for any of us to understand the mystery of the incarnation, that the Word made flesh could be fully divine and yet fully human. As Christians, however, we typically marvel over the incarnation. We need to keep marveling over the written word of God, even as we gain a greater sense of its humanity.

June 27, 2014 WHERE HAVE ALL THE CULTISTS GONE?
Recent Comments
0 | Leave a Comment
Browse Our Archives
Follow Us!