Around the 160s, the Greek satirist Lucian posted on the life and times of one Peregrinus, whom he depicted as a rogue and confidence trickster of dubious sanity. It’s a rollicking story, but one with serious implications for reading and teaching Christian history.

According to Lucian’s tendentious account, Peregrinus went through multiple incarnations: as a criminal on the run, as a Cynic philosopher, and for some years, as a Christian, who was supported by other Christians for his supposed faith and record of persecution. He eventually burned himself alive, perhaps in a philosophical gesture to show his contempt for human sensations, and the material world. (To put this in chronological context, Peregrinus’s martyrdom/suicide occurred within at most a decade of the far better known martyrdom of Polycarp).

“It was then that he learned the wondrous lore of the Christians, by associating with their priests and scribes in Palestine. And—how else could it be?—in a trice he made them all look like children, for he was prophet, cult-leader, head of the synagogue, and everything, all by himself. He interpreted and explained some of their books and even composed many, and they revered him as a god, made use of him as a lawgiver, and set him down as a protector, next after that other, to be sure, whom they still worship, the man who was crucified in Palestine because he introduced this new cult into the world.”

Reading Lucian, it is easy to see Peregrinus as a pure fraud, even a fictional character in a novel. But he was a real person, and we might rather see him as someone who floated between different faiths and philosophical schools. For at least a time, he probably was a Christian believer and leader, perhaps among the Ebionites.

For all we know, Peregrinus was at the time perfectly sincere in his beliefs, although he later moved on to other positions. But how would we know that? It’s hard enough to look inside the head of another person today, and all but impossible when we are relying on accounts by contemporaries who perished many centuries ago.

This, for me, is the most important part of the story, precisely because it is so hard to fit into our existing categories of historical writing. When we write about the early Church, say, there are really thee sorts of people: there are Christians who live and die in the faith; there are non-Christians; and there are apostates, who renege on their commitment, for whatever reason.

Apostate, of course, is a singularly damning term. But what about someone who adopts Christianity for a time before moving on to some other position, just like someone else might pass through other phases of religion or philosophy? Must we only judge them harshly as apostates, as traitors or betrayers? Surely, in the second or third centuries, the boundaries of Christianity were as fluid and porous as that of any other religion, mystery cult, or philosophical school. We need to think more about those people in spiritual transit, and how we might characterize their particular trajectories. The Roman world must have abounded with ex-Christians.

I wish we knew more about Peregrinus, but might we suggest that he was looking for martyrdom somewhere, and if he couldn’t find it as a Christian, he would do so in whatever suicidal cause came to hand? That’s a familiar enough syndrome in the modern world.

Friedrich Engels wrote a lot about Peregrinus, and as a good nineteenth century skeptic, he could not resist offering a dark suggestion about the tainted origins of the Christian scriptures:

And like our first communist workers’ associations, the early Christians too took with such unprecedented gullibility to anything which suited their purpose that we are not even sure that some fragment or other of the “great number of works” that Peregrinus wrote for Christianity did not find its way into our New Testament.

I don’t for a second believe that charge, because by the 150s the texts of the New Testament were becoming standardized. But what about other Christian literature? Lucian says that Peregrinus wrote texts for the Christian community, and they were much valued, at least for a time. If any of them survived, how might we recognize them? Or perhaps they have indeed turned up and we know them by some convenient name, assigned either to some heretical sect, or even placed in the mainstream of mid-second century orthodoxy. There really is no way we would know. (Before anyone raises this: there is a bizarre literature out there that tries to identify Peregrinus with Ignatius, which is simply impossible on grounds of chronology alone).

It might be nice to think that, once people heard about Peregrinus’s apostasy, they immediately pulled all his writings from their shelves, but the extreme diversity of the Christian world makes that unlikely.

One final thought. Just imagine some first century pagan hearing about an apostle called Paul, and writing a hilarious satire about his crimes and misfortunes, based entirely on charges made by his deadliest enemies. Would it look too different from what Lucian says about Peregrinus? And imagine further that none of Paul’s own writings survived? What a villain we would think him.

How would we ever know the truth? 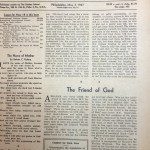 September 24, 2014
How the Federal Council of Churches influenced The Sunday School Times
Next Post

September 29, 2014 From Oxford to Malibu
Recent Comments
2 Comments | Leave a Comment
"Informative and interesting connections.Quelle or the “Q” source, a late 19th century proposal of the ..."
the old scribe The Story of Lazarus and the ..."
"Evidently not JohnBoy, at least not yet. A quick search of the internet indicates he's ..."
Jerry M “Ask Jesus into Your Heart”: A ..."
"Emitt, it looks like Wes Mahan has not replied to you - Did God judge ..."
JohnBoy “Ask Jesus into Your Heart”: A ..."
"Some candidates support the rights of the disadvantaged and poor, while others support the interests ..."
Silverwolf13 Ron Sider and the Fate of ..."
Browse Our Archives
Related posts from Anxious Bench