Zachary Hutchins’s Inventing Eden is a remarkable book. As its subtitle explains, Hutchins examines “primitivism, millennialism, and the making of New England.”

Many of us probably know that various colonial and early American boosters promoted the environs of the New World as paradisiacal, Edenic destinations in which beleaguered Europeans could quickly reap a bounty from rich new soil. Hutchins goes far beyond such commonplaces to examine how a “prevalent belief in Eden’s historicity and prophesied futurity led New England colonists of the seventeenth and eighteenth centuries to model their orchards, bodies, educational endeavors, language, souls, and social institutions after the perfect pattern of Adam and Eve’s biblical paradise.” 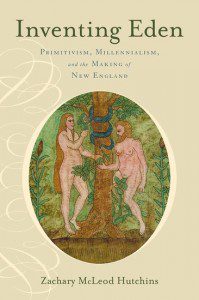 As Hutchins observes, New Englanders looked backwards and forwards at the same time, looking back to both Eden and the early Christian church while anticipating future millennial glory. “Eden was the ideal,” he writes, “to which colonial ministers looked as a pattern of ancient purity and a model of coming perfection … Primitivism and millennialism are two sides of the same edenic coin.”

Hutchins offers a thoughtful reading of John Winthrop’s “A Modell of Christian Charity” that illustrates the above point. Winthrop, he contends, looked both to the primitive Christian church and to Eden as models for Christian charity. In a discussion of the social rules to govern Massachusetts, Winthrop tells his companions that they should act “with more enlargement toward others and lesse respect towards ourselves and our own right.” He points to the “primitive Churche” in which Christians “sold all, had all things in common.” Winthrop also looked elsewhere, to the ancient Israelites and to prior generations of English Protestants. But he finally looked all the way to Eden, referencing a passage in Second Chronicle that promises that should the people be obedient, “thou shalt be like a watered garden, and they shalt be of thee that shall build the old wast[e] places.”

New Englanders believed they heard Hebraisms in native speech, remnants of the pre-Babel language of Eden, and they anticipated the conversion of those descendants of the ancient peoples as a harbinger of the millennium. Fascinatingly, early Americans and Europeans spoke of the need to remodel the English language after the language of Eden, sometimes thought to be Eden. Hutchins explains that this “transatlantic program of edenic linguistic innovation inspired the singular Quaker grammar of thee and thou as well as shifts in Puritan language theory.”

Rather quickly, New Englanders found that they could not turn their new home into a paradise, nor could they convert most of the Indians they encountered. Eventually, the evangelical New Birth provided a different sort of model for edenic restoration. Jonathan Edwards, for example, identified Cain’s birth as the moment of Eve’s postlapsarian conversion. When she brought Cain into the world, she said, “I have gotten a man from the Lord.” According to Edwards, that expression suggested that Eve “had an eye to what God said, that her seed should break the serpent’s head.” A new birth indeed. She believed in God’s promise of redemption. Over the years to come, Edwards would see many of Northampton’s women follow — metaphorically, since most conversions did not come through childbirth — Eve’s model.

In his epilogue, Hutchins quickly points out that the allure of Eden has never really dissipated in the United States. Joseph Smith, who also looked backward and forward simultaneously, believed that Eden had been located in Missouri. “Adam-ondi-Ahman,” an early Mormon hymn written by William Phelps, begins with the affirmation that “this earth was once a garden place, with all her glories common” and ends by looking forward to “the Savior’s second comin’ / When all the earth in glorious bloom / Affords the saints a holy home / Like Adam-ondi-Ahman.”

In a closing irony, Hutchins observes that “largest modern community dedicated to the restoration of edenic conditions on earth may well be the diverse individuals and groups that make up the environmentalist movement.” They do not believe in a biblical Eden, but they — or at least the more romantic among them — “believe in a historical paradise where [hu]man[s] and nature interacted harmoniously.” In fact, I would add, a good many Christians who have abandoned both a belief in a historical Eden (and Adam and Eve) as well as a literal New Jerusalem embrace the ideals of this environmentalist Eden.

October 1, 2014
Progressive Evangelicals and the Pursuit of Social Justice
Next Post

October 3, 2014 In Many Tongues
Recent Comments
0 | Leave a Comment
Browse Our Archives
get the latest updates from
Anxious Bench
and the Patheos
Evangelical
Channel
POPULAR AT PATHEOS Evangelical
1