I have been exploring how Judaism acquired its ideas of angels as named individuals like Gabriel and Michael, and whether that practice reflect Persian influence. As I suggested, our knowledge of Persian religion is actually less detailed than we often think, and that is especially true in matters like angels and the heavenly hierarchy. 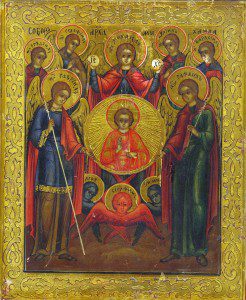 Nineteenth and twentieth century Western scholars tended to back-project from much later Zoroastrian scriptures to understand primitive forms of the faith. Also, they interpreted those scriptures with strongly Jewish or Christian eyes, making it resemble the beliefs they already knew, and that was especially true of its “angels.” In turn, the surviving Zoroastrians – the Indian Parsis – were happy to accept these interpretations because they made their religion look more like one of the respectable great monotheistic faiths.

For whatever reason, older sources made Zoroastrian religion sound exactly parallel to Western faiths. A century ago, the Jewish Encyclopedia wrote confidently that

Ahuramazda, or Ormuzd (“the Wise Lord”), leads the forces of good; Angra-Mainyu, or Ahriman (“the Spiritual Enemy”), heads the hosts of evil. Bands of angels and archangels follow the divine leader, while troops of demons and archfiends hasten after the evil lord. The archangels are six in number …. The angels and lesser divine beings are termed Yazatas (“Worshipful Ones”) and are very numerous.

Zoroastrians also postulated evil forces that were easily assimilated to Western devils and demons – what the same Encyclopedia called “The rabble of hell, led by Ahriman.”

If that is all true, then it is easy to see how Jews of the fourth and third centuries BC should have picked up their angelology ready-made from a Persian shelf.

As I remarked, though, that picture combines ideas from many different periods, and significantly “Westernizes” them. The Zoroastrian scriptures often refer to holy beings or minor deities called yazatas who struggle against demons, but it is uncertain how neatly they coincided with angels.

The closest comparison to later Judaeo-Christian practice comes with a particular subset of divine beings called the Amesha Spentas, or Bounteous Immortals. These were originally the six forces or divine sparks through which the good God, Ahura Mazda created the world of Light, with names like Devotion, Purpose and Wholeness. Together with Ahura Mazda, we see a group of seven named holy figures who assist in the rule of the divine creations. The problem, once again, is that they do not obviously possess anything like the individual identity of, say, Gabriel, and are often represented as character traits or virtues. Can we really call them archangels?

Cautiously, then, let me suggest this. Whatever the holes in our knowledge, we can safely say that the Persian world view during the occupation of Judea was Dualistic and did involve a large number of spiritual beings, good and evil, some of whom were major figures at the heavenly court. If we had more surviving writings from that Persian faith, we would perhaps see more of a resemblance to the angels and cosmic warfare that we know from 1 Enoch. So yes, with all due skepticism, I believe that the practice of naming and individualizing angels is indeed a Persian borrowing,

One objection to this is that there is a significant gap between the end of Persian rule (330) and the rise of Jewish angelology represented in 1 Enoch, which might be a century later. On the other hand, there is no suggestion that 1 Enoch was intended to propose some kind of new view of the universe, rather it was expressing ideas that were already well-established.

Also, the end of Persian rule did not suddenly draw an impenetrable frontier between Palestine and points east, quite the contrary. Third century Jews of the third lived in a post-Alexander Hellenistic world that stretched from Egypt to Afghanistan, in which ideas and beliefs traveled quite as freely as they had in Persian times.

On balance, then, I think we can attribute our angels to Persian origins, but the borrowing is neither neat nor straightforward.