As a historian, I am grateful for anti-Mormon exposés. Admittedly, the genre poses obvious problems. Those who leave (and especially those who are expelled from) a religious organization often have an obvious axe to grind. At the same time, they have been inside the organization and know things about which outsiders are not privy. And while it’s easy to dismiss exposés as biased, all sources have their own points of view, some more obvious or distorting than others. Historians face the task of separating the chaff from the wheat, to the best of their ability.

In terms of early Mormon history, exposés penned by Increase and Maria Van Deusen, Catherine Lewis, T.B.H. and Fanny Stenhouse,  and those produced by John C. Bennett (a favorite bogeyman of many Latter-day Saint historians), John D. Lee, and Ann Eliza Young provide some insights difficult to glean from other sources. The Van Deusens and Catherine Lewis provide valuable detail about the Nauvoo Temple. While I don’t think Bennett is reliable on the early Nauvoo endowment, some of the material he collected about Mormon polygamy was correct. T.B.H. Stenhouse is a valuable source for some of Utah’s early political history. One must read all of these sources in context with discernment. As Stenhouse said of Bennett’s The History of the Saints (1842): “There is no doubt, much truth in Bennett’s book . . . but no statement that he makes can be received with confidence.” One must also say that as a genre, the exposé is a great deal of fun, especially if one has no personal investment in the organization. They are usually filled with sensationalistic detail and resemble the captivity narratives that both scared and thrilled nineteenth-century readers. 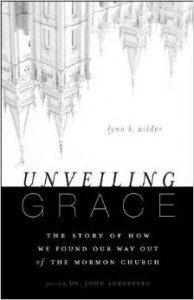 I have not digested very many contemporary memoirs of former Latter-day Saints, but I recently read Lynn Wilder’s Unveiling Grace. For the most part, it’s not written in the sensationalistic style of exposés. It’s first and foremost a spiritual journey, which leads Wilder into and eventually out of Mormonism. In a nutshell, her family eventually rejects what she terms the works-based theology and culture of Mormonism in exchange for grace-filled evangelical Christianity. “I found the real Jesus,” she writes, the “biblical Jesus.” “It’s all about Jesus,” she writes of her family’s new faith.

Unveiling Grace is an engaging and often respectful account of both her family’s attraction to and eventual disengagement from the Church of Jesus Christ of Latter-day Saints. The Wilders joined the church in Indiana. After she and her husband were baptized, her new extended family (her ward brothers and sisters) made the Wilders entirely welcome, helped them through personal tragedies, and provided space in which they encountered God’s grace.

A major theme in Unveiling Grace is that the church worked Lynn Wilder and her husband into the ground. They each received callings (particular offices or responsibilities), and they felt they could not turn them down. The callings were instructions from their ecclesiastical superiors, and they had covenanted to obey those leaders. Moreover, what they did on earth contributed to the extent of their celestial glory. Do as much as possible and then some!

What pushed the Wilders from ecclesiastical stress to outright disaffection were two related factors. One of their sons, in an attempt to convert evangelical Christians in Florida, concluded that Mormonism conflicted with the New Testament. For example, the letter to the church in Ephesus instructs that “by grace you have been saved through faith, and this is not your own doing; it is the gift of God — not the result of works, so that no one may boast.” Wilder contrasts such verses with the Book of Mormon’s clarification (in 2 Nephi 25:23) that “we know that it is by grace that we are saved, after all we can do.” Latter-day Saints believe that their completion of ordinances (including baptism, the endowment, and sealing in marriage) and the upholding of those sacred covenants are necessary for their celestial glory. Perhaps Jesus’s atonement freed human beings from death, but mere belief or faith will not grant one a residence in one of the finer mansions in heaven.

Second, some church leaders and members treated family members struggling with doubts about the church — and in one case, with violations of the church’s moral standards — harshly. The Wilders ached for tenderness and love. Instead, they encountered judgment and gossip, not from everyone, but from too many of their “brothers and sisters.”

As a full examination of the above issues is not possible in a blog post, here are a few quick thoughts:

There is obviously a large amount of theological space between evangelical Protestantism and the LDS Church. “How Wide the Divide?” asks one co-authored book by a Mormon and an evangelical. Their conclusion was that the divide is not as wide as most Latter-day Saints and most evangelicals believe. Although there are genuine and important theological disagreements, there is a great deal on which Mormons and other Christians agree. Wilder alleges that the “Mormon Church is not in the body of Christ, because Mormonism teaches doctrine that is contrary to what Jesus himself taught.” That judgment often goes both ways. Latter-day Saint Apostle Dallin Oaks spoke of Mormons as “a fervent and fast-growing group of believers who persistently disdain the comfortable fraternity of ecumenical Christianity.” The Latter-day Saint belief that Protestant and Catholic Christians are in apostasy is significant. Without apostasy there would have been no need for the restoration under the leadership of Joseph Smith. Between charges of apostasy and heresy, there has been plenty of invective on both sides of the evangelical and Mormon divide. Putting aside questions of ecclesiastical division for a moment, I strongly encourage evangelicals and Latter-day Saints to see each other as fellow members of the Body of Christ.

I found much of Wilder’s book a respectful analysis of a church and a people she had left behind. However, especially because she discusses a desire to reach Latter-day Saints with the message of God’s grace, it seems rather ungracious of her to suggest that the LDS Church is “a synagogue of Satan.” The later chapters in the book are simply not as engaging because Wilder’s own personal spiritual journey makes for far more compelling reading than her theological critiques of Mormonism. At the same time, I know that from the 1840s onward, Mormon leaders have often hurled insults at those who have left the faith. See, for instance, statements about Martha Brotherton, who rejected a proposal of plural marriage from Brigham Young in 1842. The Wilders encountered some of this pain, so if they return a bit in kind one can hardly blame them. But things are changing. Last year, Dieter Uchtdorf maintained that in “this Church that honors personal agency so strongly, that was restored by a young man who asked questions and sought answers, we respect those who honestly search for truth.” Some evangelical Protestants join the LDS Church. Some Latter-day Saints embrace the evangelical Jesus. When this happens, converts often experience alienation, if not rejection, from relatives and friends. That sort of judgment is foreign to the love of Christ.

Jesus, grace and Mormonism? Latter-day Saint leaders and scholars have placed a greater stress on grace in recent decades, in tandem with the pronounced christocentric emphasis within contemporary Mormonism. Of course, there are real disagreements here. Many Latter-day Saints believe that evangelicals preach a grace too cheap and easy. “That was the born-again way,” writes Joanna Brooks in The Book of Mormon Girl, “just confess the name of Jesus, say Jesus-I-take-you-into-my-heart and poof!” [For a sense of how evangelicals used to treat Mormons (and how some still do), read Brooks’s memoir]. Mormons have a distinctive understanding of salvation (and exaltation), but Latter-day Saints teach and experience grace. See the church’s 2014 Christmas advertisement. Many critics of Mormonism describe the church’s devotion to Jesus as a veneer or deception. I agree with Catholic scholar Stephen Webb’s assessment that “Mormonism is obsessed with Christ, and everything that it teaches is meant to awaken, encourage, and expand faith in him.” Mormon devotion to Jesus Christ is genuine, not a subterfuge. Though it’s not as applicable to evangelicals such as Wilder as it is to mainline Protestants, Webb makes the point that Latter-day Saints take many essential doctrines (such as the divinity and literal resurrection of Jesus Christ) more seriously than many churches.

Finally, Wilder reminds me why I have enjoyed reading nineteenth-century exposés. They make for good reading, for starters. And for scholars (and for ecclesiastical leaders), it’s important to understand both what attracts individuals to a church and what repels them.