Mani and the Persian Kings

I have been reading an excellent new scholarly book on the Manichaean religion: Iain Gardner, Jason BeDuhn and Paul Dilley, Mani at the Court of the Persian Kings: Studies on the Chester Beatty Kephalaia Codex (Brill 2015). This post is not intended as a serious academic review, but rather as a series of thoughts and impressions that this fine book provokes. I will divide my comments into two separate posts.

It is astonishing that scholars of religion refer so little to the Manichaean faith, which in its day – roughly from the third century AD through the fourteenth century – was a fully fledged world religion, which interacted with Christianity, Buddhism, Islam, Zoroastrianism and Judaism. At various times, its adherents could be found across the whole of Eurasia, from France to China. It also created a substantial body of scriptures and commentaries, most of which are now lost. 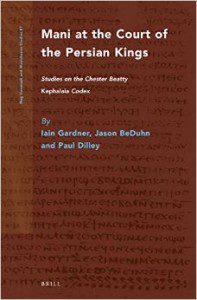 Manichaeanism (Manichaeism) is, I believe, the only example of a world religion that has arisen and then vanished entirely, seemingly without trace. (Although Zoroastrianism is much diminished, it does survive in scattered remnants). Bear that in mind the next time someone says that “You can’t kill an idea.” That unique quality in itself makes the faith eminently worth studying. Of course, there are fine Manichaean specialists – three of them wrote this book – but you can still read plenty of books on early and medieval Christianity or Islam that manage to ignore the presence of this powerful and sometimes threatening neighbor.

For centuries, our knowledge of Mani’s faith was mainly dependent on comments in other rival traditions, which naturally tended to be hostile. In the 1930s, though, that situation was revolutionized by the amazing discovery of a collection of codices that told the Manichaean story in the words of believers themselves. Other texts have subsequently been found in Greek, Iranian and Uighur, reminding us of the extraordinary spread of the faith. Some of the most important discoveries have been made in Western China, in oasis settlements connected to the Silk Road.

The find of this collection, the Medinet Madi library, reminds us of how extraordinarily lucky we have been with such discoveries in modern times. We think for instance of the Dead Sea Scrolls and the Nag Hammadi library, but in fact ancient manuscripts have turned up in amazing profusion – look at the records of the Cairo Genizah, which have transformed our knowledge of medieval Jewish history. For a variety of reasons, Egypt is especially productive in such treasure troves, and the present document is no exception.

Although Mani himself was a Mesopotamian, who lived under the rule of the Persian Empire, he had followers in Egypt, who translated his sacred words into Coptic. In that form, the collections turned up in the 1920s near ancient Terenouthis. The collection would have been concealed not long after the Nag Hammadi library of Gnostic texts, and presumably for the same reason. The new Christian regime in Egypt was increasingly intolerant even of Christian heretics, and Manichaeans were far beyond the pale of decency. Egyptian monks tended to resort to vigilante violence to seek out and destroy such abhorrent scriptures.

In modern times, the texts returned to the light of day (a nice Manichaean phrase, incidentally). As W. H. C. Frend writes, “Eventually, seven complete works were recovered, which a native had originally found in a waterlogged chest in the rubble of a Roman house in a village in the Fayum, and brought with him into Cairo. Here were not only some translations of the works of Mani himself, but more interesting, the hymns and psalms sung by his humble followers in Egypt. For the first time the impact of this sad dualistic religion of resignation and fatalism on the ordinary people of the Roman Empire was revealed.” I like Frend’s remark that the saga of this discovery “belongs almost to the realm of science fiction”! When the library reached the hands of modern-day antiquities dealers, they divided it up in order to maximize profits. Some of the documents found their way to Berlin, others to Dublin’s Chester Beatty Library. Not surprisingly, the disasters of the 1940s took their toll on the Berlin materials, some of which are now lost.

In full, the whole collection consisted of several codices – probably seven – which together comprised an essential library for the Manichaean “church”:

-The Chapters [Kephalaia] of the Teacher

-the Acts, a history of the church

-a collection of Homilies

-the Synaxeis of the Living Gospel

­-The Chapters [Kephalaia] of the Wisdom of my Lord Manichaios

Incidentally, these codices represent some of the largest books known from antiquity.

Parts of this material have been published through the years, and in 1995, Iain Gardner published The Kephalaia of the Teacher, which included a text with translation and commentary. (See also Iain Gardner and Samuel N. C. Lieu, eds., Manichaean Texts from the Roman Empire (Cambridge University Press, 2004.) The present book, though, focuses on the last-named of these works, the Chapters [Kephalaia] of the Wisdom of my Lord Manichaios. This stellar team of authors, Gardner, BeDuhn and Dilley, is now working on a similar edition of that text.

Almost certainly, the text was written in Syriac, before being translated into Coptic around 400. Its main focus is the life and historical role of Mani himself, the messianic prophet who died in 270. The text was collected by one or more of his faithful disciples, who became fervent evangelists for his teachings.

In 1969, Egypt again produced a remarkable find in what became known as the Cologne Mani Codex, discovered near Asyut (Lycopolis). This supplied critical new biographical background about Mani and his background. Together with the Medinet Madi texts, it also showed the utter falsehood of the older view that Mani’s faith was a straightforward Christian or Gnostic heresy.

Tomorrow, I will be describing some major themes that emerge from this evocative material.

January 26, 2015 Mani the Prophet
Recent Comments
2 Comments | Leave a Comment
"I wished Covid killed you instead of Larry King"
Christian America’s Invisible Churches
"Never heard of Kuyper before today. I don't think. Timely article. It seems that no ..."
Gene jones Josh Hawley, Betsy DeVos, and Abraham ..."
"Yawn"
odgie America’s Invisible Churches
"Yup. Good question. I would not reduce the question to recent presidential politics, but I ..."
John Turner The Evangelicalism I Love
Browse Our Archives
get the latest from
Anxious Bench
Sign up for our newsletter
POPULAR AT PATHEOS Evangelical
1