Every year tens of thousands of people visit the Kirtland Temple, dedicated in 1836 by what was then the Church of the Latter Day Saints. The vast majority of those visitors are members of the Utah-based Church of Jesus Christ of Latter-day Saints, and they come in part to see where Joseph Smith and Oliver Cowdery saw Jesus Christ and Elijah in the temple.

Those primarily LDS visitors, however, visit a temple not owned by their church. The temple is the property of the Community of Christ, formerly the Reorganized Church of Jesus Christ of Latter Day Saints, which obtained title to the temple on the basis of “adverse possession” around 1900. Community of Christ tour guides lead visitors through the temple, though the LDS Church operates its own visitors center and several other Kirtland historic sites.

David Howlett was once one of those Community of Christ tour guides. Now he has written a lucid and thoughtful sharp “biography” of the Kirtland Temple, focusing on how the “parallel pilgrimage” of diverse groups has brought about confusion, conflict, and strategic cooperation.

It’s worth noting at the outset that the “Mountain Saints” (LDS) and “Prairie Saints” (RLDS) spent more than a century cultivating their identities in part through their active dislike of each other. After Joseph Smith’s death, his first wife Emma — who rejected plural marriage and, with it, Brigham Young’s leadership — and their children remained in Nauvoo, Illinois. Joseph Smith’s sons grew up believing that their father was a faithful monogamist and that the “Brighamites” had corrupted his father’s church. Young, in turn, believed that Emma had poisoned the minds of her children, who otherwise might eventually have come to Utah. After Joseph Smith III assumed leadership of the Reorganized Church in 1860, Young’s dislike for Emma evolved into public loathing. “[M]ore hell was never wrapped up in any human being than there is in her,” he said of her in 1863. While the RLDS Church never found many converts in Utah itself, it gained a significant number of members in states such as California and Illinois. Over the past half-century, the LDS has grown significantly, whereas the RLDS Church (renamed Community of Christ in 2001) has not. Today, most members of the Utah Church know little if anything about their Community of Christ counterparts.

Howlett begins Kirtland Temple: A Biography of a Shared Mormon Sacred Space with a concise and very informative account of the temple’s construction and dedication. As they anticipated an imminent Second Coming, the Saints understood the Kirtland Temple as an opportunity to relive Pentecost as an “endowment of power” that would prepare them for the premillennial task of evangelism. Mormon elders recapitulated a host of biblical rituals prior to and during the temple’s dedication: washings, anointings, foot washings, ritual shouts, blessings, and the sacrament of the Lord’s Supper. In the temple, they experience glossolalia, prophetic utterances, and visions. After Smith and Cowdery saw Jesus Christ in the temple, they also saw Moses, Elias, and Elijah; the latter told them that “the keys of this dispensation are committed into your hands, and by this ye may know that the great and dreadful day of the Lord is near, even at the doors.” Later Utah-based Latter-day Saints came to understand the vision as divine authorization for subsequent LDS temple rituals for the living and the dead. The Prairie Saints, who eventually rejected those rituals, “took the same vision as evidence for the Divine’s acceptance of the temple as a holy structure.” The same events meant very different things to different groups of Saints. 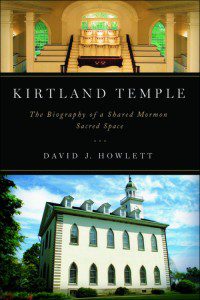 Shortly after the 1836 dedication, everything fell apart in Mormon Kirtland. A bank established by Mormon leaders in early 1837 quickly collapsed, prompting many Saints to lose confidence in Smith’s leadership. The Mormon prophet, hounded by creditors and dissidents, soon fled to Missouri, and various splinter groups controlled the temple for the next several decades. Things fell into disrepair. One Kirtland resident later remembered that in the 1850s “the doors to the temple stood open and sheep and hogs and cattle … wandered around at their own sweet will inside the building.” Howlett speculates that this story was the source of the belief that local inhabitants had “desecrated” the temple, an assertion repeated by LDS leaders late into the twentieth century. (The fact that the Reorganized Saints gained possession of the temple probably did much to encourage Utah Saints to see the Kirtland Temple as “desecrated”).

Various conflicts dominate Howlett’s twentieth-century narrative. There were tense interaction between RLDS guides and LDS visitors, as well as hopes and fears that the Reorganized Church would sell the building to the LDS Church. The RLDS also endured intense intra-church conflicts over its identity. In 1984, RLDS Prophet Wallace B. Smith (great-grandson of Joseph Smith, Jr.) brought forth a revelation calling for the ordination of women (and the construction of an RLDS temple in Independence, Missouri, dedicated in 2004 and the church’s only other temple other than Kirtland). The decision to ordain women (including within local congregations opposed to the reform) fractured the church; around one-fourth of the church’s membership left, some to fundamentalist RLDS churches. “We did not leave the church; the church left us,” said many RLDS Restorationists. Over time, the RLDS continued its trajectory toward a “peace and justice church,” in the process shedding much of its previous identity and placing less of an emphasis on its early restorationist history, Joseph Smith, and the Book of Mormon.

One of those disaffected by the 1984 revelation was Kirtland Temple guide Jeffrey Lundgren, who through his teaching and prophecies gathered a small group of ultra-dedicated followers and began talking of violent action against the RLDS Church and “destroy[ing] the wicked who are now in control of the temple.” Instead, he and his followers killed “a family of five marginal followers,” whom they lured into Lundgren’s barn, gagged, shot, and buried in a pit inside the barn. The youngest victim was six years of age. The shocking crime brought Kirtland unusual notoriety.

Putting the grisly murders aside, Howlett’s story ends on a fairly positive note. Eventually, the RLDS/Community of Christ and the LDS Church found more ways of getting along. Leaders on both sides gave signals of mutual respect. Members of the two churches worshiped together. There were still many awkward moments. Howlett recounts many pointed questions from LDS visitors to the temple from his experience as a guide. For the most part, however, the two sides have found constructive and cooperative ways of sharing sacred space. Not a bad achievement for two churches who both aspire to a Zion ideal of peace and unity.

January 21, 2015
Divided by Reason: Molly Worthen on Evangelicalism
Next Post