The Bounty of Keston

For anyone interested in Christian history, Baylor University’s archives have rich holdings on all sorts of important topics. In this post, though, I want to focus on one astonishingly rich archive that clamors to be better known. This is the Keston Collection, a stunning collection of sources on European history, on religious persecution and religious freedom.

Hard though it might be to recall today, for much of the twentieth century, the Soviet Union was a fanatical persecutor of all religions, above all Christianity. Between about 1945 through 1989, the Soviet occupation of Eastern Europe imposed that fanatically anti-religious regime on those lands too. The Keston Collection has some of the world’s most important holdings on those persecutions, and the stubborn resistance.

I adapt the following from a piece I wrote in Christian Century back in 2011.

The collection is the life’s work of Anglican Canon Michael Bourdeaux, who first visited Moscow in the 1950s. By the 1970s, he had founded Keston College in a London suburb, before moving it to Oxford. For twenty years, Keston became a center for the academic study of religion throughout the Eastern Bloc, and the primary source to which media and political leaders could turn for accurate and up-to-date information. Keston played a critical role in keeping up pressure on the Soviets as they made their stumbling moves towards liberalization. In 1984, Bourdeaux won the Templeton Prize.

In later years, though, Keston became the victim of its own success. Although religious liberty issues remain alive in the new Russia, they are nothing like as prominent, or as newsworthy, as they were in the epic days of the Cold War, and the college faded from the headlines. But it still retained its staggering archive, which in 2007 found a new home at Baylor

Today, Baylor’s Keston Center is a massively under-explored resource for researchers in European history, or in the larger picture of modern Christianity. Of course, it has all the obvious books, news clippings and printed records, but some of the finds here amaze. Keston has complete runs of the various atheist and anti-religious magazines that the Soviets and their puppets ran to combat the influence of faith, with all the related cartoons and posters. You could spend days just sorting through the visual materials from 1917 onwards, particularly the contemporary propaganda posters presenting venomous attacks on Christians, Jews and Muslims.

And then there is the religious samizdat, the underground “self-published” materials that Soviet believers produced through the darkest years, at risk of imprisonment or worse. Among the thousands of clandestine publications at the Keston Center, we find petitions, news-sheets, and memoirs. One evocative item is the 1960s trial transcript of a Russian Baptist organizer, surreptitiously recorded on fragments of cloth.

Only a small proportion of the collection is available online. Despite the dedicated work of Baylor archivists and librarians, the collection is huge, and much remains unsorted. Much of what has been catalogued is sensitive on grounds of confidentiality, or complex copyright issues. Even so, the archive is open to qualified researchers.

Although it is only a small subset of the larger collection, I offer a couple of samples of the kind of material it contains, to illustrate the religious war that went on the old USSR, and the values of that anti-religious state.

Why should people abandon religion? Well, here is Exhibit A. On the left (where else?) we see Socialist Woman, strong and proud and glamorous. To the right, that shriveled figure is a Christian woman, clutching her bottle of Holy Water. 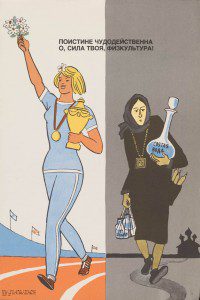 As we see here, religion is a deadly menace to children. While his friends are off to the Club, the cinema or the planetarium, to see the wonders of science, the poor Christian boy is restrained by a sinister figure with a Bible in his pocket – are we meant to see him as a potential molester? 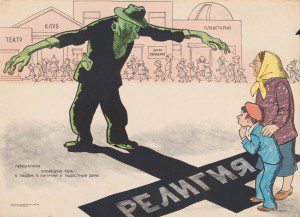 This final poster will not come out well, but it is wonderful. It shows all the Orthodox saints, those lean and unkempt figures, getting showers and beauty treatments in the new consumer society. (Click on the image to see more detail). 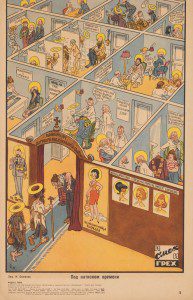 And then, of course, came the day when it was blatantly obvious that the Soviet order could not supply health, beauty, consumer goods, or anything vaguely approximating a decent standard of living. Suddenly, those attacks against the failed primitive world of religion did not look so convincing.

January 12, 2015 Determined
Recent Comments
0 | Leave a Comment
"The original Greek word meant "free" in one of its connotations and that meant not ..."
Karen Silver What Is a Heretic?
""...religion would have to be grounded in personal experience."Oh well, these days JFK could reappear ..."
Robert Conner Did the Fundamentalists Win? A Centennial ..."
"They do indeed. The Bible Paul knew and quoted was the Septuagint. Not for a ..."
philipjenkins What Empires Do
"I would also add one thing, which is the recurrent appeal of healing as part ..."
philipjenkins What Empires Do
Browse Our Archives
get the latest updates from
Anxious Bench
and the Patheos
Evangelical
Channel
POPULAR AT PATHEOS Evangelical
1