I have been enjoying the latest book by Timothy Larsen, The Slain God: Anthropologists and the Christian Faith (Oxford University Press, 2014).

At first sight, such a study of the rise of an academic discipline might seem like an odd topic for a scholar who has established such a splendid reputation writing on specifically religious and theological topics. (See for instance his Crisis of Doubt: Honest Faith in Nineteenth-Century England, 2006, and A People of One Book: The Bible and the Victorians, 2012). The significance of his latest contribution only becomes apparent when we realize how much anthropological insights and arguments have shaped Western debates over religion in the past 150 years – quite as much as biology, geology or astronomy.

In the nineteenth century, anthropology emerged in response to the sudden onrush of that first globalization, and the European discovery of African and Asian cultures. Those discoveries fed into contemporary debates over the necessity for Christian faith, in a Europe whose God was seemingly being slain. 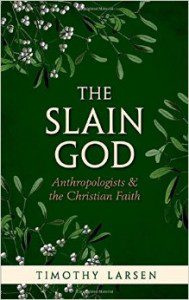 Gradually, scholars noted the close resemblances between the societies that produced the Bible and more modern “primitives,” with grim effects on perceptions of the ancient Hebrew world. At the height of the American crisis over theological Modernism in the 1890s, anthropologist James Mooney declared that the patriarchal ancestors of the Biblical Hebrews were no better than modern-day American Indians. They “had reached about the plane of our own Navaho, but were below that of the Pueblo. Their mythologic and religious system was closely parallel.” If much of the Bible was the record of the barbarous tribes of ancient Israel, how could it be presented as superior to legends and tales of despised Indians or Africans or Papuans?

Still more damaging were claims that key beliefs of Christianity paralleled or plagiarized the common myths of the Middle East, especially those of a dying and rising god. If you follow the comments sections on religious blogs today, it is amazing to see how many commentators still recycle these hoary and long-discredited arguments of early twentieth century Rationalism. Sir James Frazer’s Golden Bough has a lot to answer for.

Comments on this post concerning alleged similarities between Jesus and Attis or Adonis will be ruthlessly deleted, never to rise again. And don’t get me started on Mithras.

Larsen’s book, then, needs no excuse. How did the science of anthropology emerge in the English-speaking world, and how did its founders situate themselves in ongoing debates over religion? “This study sits on the fault line where doubt and faith collide with anthropological theory and evidence.”

As he shows, some key figures found it impossible to reconcile their academic insights with Christian faith. Apart from Frazer, this was true of E. B. Tylor, and Larsen shows how often blatant anti-religious propaganda was lightly camouflaged by scientific rhetoric. Reading Frazer, someone unacquainted with contemporary Christianity might assume it was a particularly bloodthirsty human sacrifice cult. I have enjoyed the Golden Bough much more after discovering the semi-serious argument that it is in fact a post-modern fantasy novel that happens to take the form of an academic work. Shades of Nabokov’s Pale Fire….

Yet other fine scholars did succeed in integrating Christian faith and learning, and Larsen offers effective portraits of E. E. Evans-Pritchard, Mary Douglas, Victor Turner, and Edith Turner. Douglas and the Turners, incidentally, demonstrate the specifically Catholic aspects of that stubborn and resilient Christian intellectual life.

Larsen thus shows that first-rate scholarly anthropologists could indeed remain Christian, just as much as leading biologists or geologists. Science did not, necessarily, kill faith.

Readers interested in continuing debates over faith, science and secularism will find much of value in this very important book. The further you get into the book, the more astonished you are that no predecessor has written such a full-length study of this critically important topic.

January 19, 2015 Moors, Saracens, and Turks: Islam and Europe’s Deep History
Recent Comments
2 Comments | Leave a Comment
"Informative and interesting. Thank you. This raises questions about the term Protestant Reformation."
the old scribe How the English Reformation was Named: ..."
"Thank you for the insights. As you pointed out, technology has been a two edged ..."
the old scribe Is Religion Naturally Averse to Technology?
"I suppose the question is whether or not the Holy Spirit could use technology to ..."
Nimblewill Is Religion Naturally Averse to Technology?
"What a great post, Allie! Insightful and eloquent."
Ansley Every Day People in Every Day ..."
Browse Our Archives
Related posts from Anxious Bench