The Unintended Consequences of Evangelical Cooperation 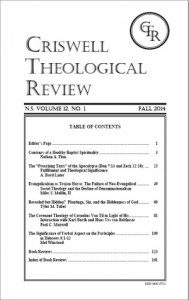 So I argue in my article, “Evangelicalism as Trojan Horse: The Failure of Neo-evangelical Social Theology and the Decline of Denominationalism,” which appears in the most recent edition of Criswell Theological Review.  Further, I contend that while the cooperative, culturally-engaged, and evangelistic movement known as “the new evangelicalism” successfully expanded evangelical presence,visibility, and influence by building an evangelical coalition upon some core commitments, those efforts came with a cost.  In the end, the unintended consequence of that expansion were the decline of denominational loyalty, vigor, and theological reflection about matters related to public life and the common good.  Thus, while post-war evangelicals succeeded in “uniting for action,” they only did so by intuitively and intentionally downplaying their denominational theologies, traditions, and distinctions.

Ironically then, the “grand vision”–as my friend Owen Strachan is wont to call it–of neo-evangelical leaders towards a unified, theologically-grounded evangelical social vision and mission undermined the ability for participant denominations to do the same.

In the end, the “new evangelical” efforts towards social engagement accomplished much.  At the same time, they contributed to the demise of denominational commitment and rigorous tradition-specific theological engagement with social issues by encouraging social efforts borne out of the minimalist theology which held the movement together.  Throughout its early years, the National Association of Evangelicals rallied denominations around its motto “Cooperation without Compromise.”  In practice, the neo-evangelical venture effectively undermined that sentiment, making continuing cooperation contingent on compromise.  As political power increased for NAE-type evangelicals in the 1970s and beyond, a return to denominational rigor would have meant the fragmentation of the movement and a loss of cultural and political influence.  In this way, cooperative evangelical efforts towards unified social action became a Trojan horse.  The cooperation that looked like a gift to conversion-oriented denominations at mid-century undermined the theological rigor of those same denominations, replacing it with a blasé evangelicalism-of-the-public-square possessed of little depth.

You can read the rest of the article, as well as fine articles from Nathan Finn, A. Boyd Luter, Tyler Taber, Paul C. Maxwell, and Paul Winstead either in Criswell Theological Review 12/1 (Fall 2014) or on ATLA.  I hope  you will.

January 15, 2015 Evangelical Anti-abolitionists
Recent Comments
4 Comments | Leave a Comment
"Great topic, and a terrific discussion."
philipjenkins Tejano Methodism, Material Culture, and COVID
"The fastest growing religion in Sub-Saharan Africa, Carribean (Haiti, Jamaica, Dominican Republic etc), Central America ..."
Paul Juma Biblical Authority amidst American Christian Division: ..."
"Let us know when your book is on the NYT best seller list."
Enlightened Do Evangelical Churches Have a Catechesis ..."
"It's the habit of historians to use historical examples of practices as proof of the ..."
Leigh Ann It’s A Small, Small (Complementarian) World
Browse Our Archives
get the latest updates from
Anxious Bench
and the Patheos
Evangelical
Channel
POPULAR AT PATHEOS Evangelical
1