A Thief in the Night 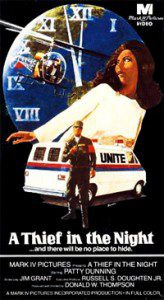 Today, as part of a course on religion and film, I had the opportunity to discuss the 1972 film A Thief in the Night with a group of religious diverse undergraduate students.

My church — a Presbyterian Church (U.S.A.) congregation that straddled the worlds of evangelical and mainline Protestantism — did not screen the film when I was a teenager. We were encouraged to make a personal decision to follow Jesus Christ, but not because the world was about to end or because we might be left behind to suffer the assaults of Satan after the rapture. So while thousands or millions of American evangelical young people watched A Thief in the Night in the 1970s and 1980s (the film’s producer claims that in all, three hundred million people have seen the movie), I watched it for the first time this week.

Here are a few thoughts:

– Laugh and groan all you want. It’s no small accomplishment to make a $60,000 film and have millions of people see it. A Thief in the Night is certainly one of the very few most significant evangelical movies ever made. As Randall Balmer observes, “It is only a slight exaggeration to say that A Thief in the Night affected the evangelical film industry the way that sound or color affected Hollywood.”

– People make films for all sorts of reasons. The primary purpose of A Thief in the Night was evangelism, to persuade nominal Christians to make a heart-felt prayer asking Jesus to come into their hearts. What the film intended to do it apparently has done rather well. “I have found,” writes Heather Hendershot in her Shaking the World for Jesus, “that A Thief in the Night is the only evangelical film that viewers cite directly and repeatedly as provoking a conversion experience.” Many successful altar calls followed screenings of the film.

– At the same time, even a film such as A Thief in the Night is not only evangelism and theological instruction. Evangelicals have long found apocalyptic speculation captivating. Apocalyptic novels and films appeal to a certain evangelical niche just as science-fiction appeals to a certain (large) segment of society as a whole. Hence, the millions of Left Behind sales.

– Even if you do not intellectually accept the film’s particular brand of apocalyptic theology, it’s still powerful. Even though my church did not espouse this theology, I absorbed some of it in the broader world of parachurch evangelicalism. Thus, the premise that believers will be “caught up” to “meet the Lord in the air” retains its fundamental drama for me. I frequently read that A Thief in the Night scared a generation of evangelical children and teenagers. I believe it. And I get scared when any movie scene involves snakebites.

– Sometimes I wonder exactly why premillennialism became so central to post-Civil War (and especially post-WWI) American evangelicalism. Certainly, the fact that the world often seemed poised on the point of collapse contributed. I also speculate that as life expectancies grew and as young people in particular envisioned long lives in front of them, the idea of the rapture provided a new spur for evangelism. Fear of the imminent rapture/tribulation replaced the fear of an imminent death for many preachers and listeners.

– The evangelical embrace of the pre-tribulation rapture presupposes a rather stark divide between true, committed Christians and nominal (read mainline, liberal) Christians. Perhaps the most significant antagonist / villain in A Thief in the Night is Reverend Turner (no relation to me), played by the film’s producer Russell Doughten. It is interesting to think about how evangelicalism and liberal Protestantism have defined themselves in large part through mutual opposition over the past seventy years or so. I think the mutual antagonism is a bit softer today than it has been in years past, but the basic framework remains.

– Anyone who wonders why so many Americans deeply suspect the U.N. (in addition to the venerable American fear of distant, undemocratic tyranny) should watch A Thief in the Night or read the Left Behind novels.

– I don’t enjoy hearing anyone but Larry Norman singing “I Wish We’d All Been Ready.”