The title refers not to Sam Walton of Wal-Mart fame or to George Pepperdine, who started Western Auto Supply and used the money to found Pepperdine University. The new entrepreneurial evangelicals are from the Majority World. Esteemed Anxious Bench contributor Philip Jenkins has a great line in The Next Christendom: “If we want to visualize a ‘typical’ contemporary Christian, we should think of a woman living in a village in Nigeria, or in a Brazilian favela.” The centers of Christianity now, in other words, are not Geneva, Rome, or Los Angeles, but instead Kinshasa, Buenos Aires, Addis Ababa, and Manila.

Oya-Hazel Gumede fits the profile of a rising class of global entrepreneurs. She grew up in the midst of South African apartheid. Her mother died of AIDS. Her father was not around much during her childhood. Her brothers were victims of violence. She was raised in a township called Gezinsila, which means “wash your filthy feet,” by her grandmother, who used to slaughter a chicken to celebrate a good report card from school.

Along with her grandmother’s care, several things sparked Gumede’s upward mobility. As a teenager she converted to Pentecostal Christianity. Just as important, she came of age at the dawn of new, exciting possibilities in a democratic South Africa. Gumede harnessed her native intelligence and charisma to become a leader in her local church community. In addition to serving as dean of a small Bible institute, she rapidly rose in professional ranks. She eventually worked in the office of First Lady Zanele Mbeki, advised various government agencies, represented South Africa at the United Nations, and travels throughout Africa on business. She is the co-owner of Ashira and Shelton law firm. Gumede, along with other evangelicals, are moving comfortably in elite, so-called “black diamond” circles that are beginning to emerge in a white-dominated South Africa.

Gumede, according to sociologist Steve Offutt’s important new book New Centers of Global Evangelicalism in Latin America and Africa, represents a new kind of entrepreneurial global evangelical. Gumede and other local actors are globally connected, drawing on newly available transnational religious resources to build organizations and institutions. They are not overwhelmed by these global resources in their environments; rather, they use them to achieve their own ends and to mold their own religious communities. 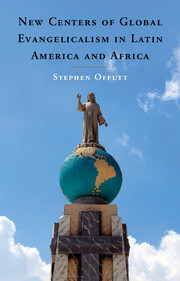 Offutt makes many striking observations about these new centers of global evangelicalism, among them the role of huge megachurches, widening social stratification, and sophisticated levels of political and social engagement. Perhaps the most fascinating development is that global entrepreneurs are exporting religion, not just importing it. They are sending out their own missionaries, radio programs, and literature along a South-South axis: Salvadoran churches working with Chinese churches and South African religious networks extending to Argentina. In my own Mennonite circles, I’ve observed groups of Nicaraguans moving to Bangkok to attend university and to join churches in Thailand. Offutt’s book shows that these are not isolated cases. Religious communities in the Global South are increasingly ambitious in their social engagement and growth of big organizations. And significantly, while still influenced by the West, the West does not control them. Contra Brouwer, Gifford, and Rose in Exporting the American Gospel: Global Christian Fundamentalism, they are “culturally savvy, technically capable, and religiously inspired.” They use Western resources toward their own ends.

The research that undergirds these conclusions is impressive. For his two case studies of El Salvador and South Africa, Offutt conducted 118 interviews with leading evangelicals, including the heads of evangelical alliances, senior pastors of megachurches, entrepreneurs working in the private sectors, and nonprofit and political actors. He went to church with them and sometimes even lived in their homes. Attuned to the many textures of a rapidly changing Global South and suggestive of broader trends, New Centers of Global Evangelicalism represents the best of a growing literature on transnational religion. 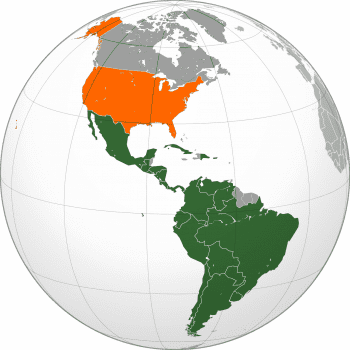 What Khartoum Promised in 2017
Leaked Document Leaked document 2017 Sudan has a long way to go...
view all Evangelical blogs
What Are Your Thoughts?leave a comment
Copyright 2008-2020, Patheos. All rights reserved.