Today’s guest post comes from Jonathan Den Hartog, associate professor of history at the University of Northwestern in St. Paul, Minnesota. The University of Virginia Press recently released his Politics & Piety: Federalist Politics and Religious Struggle in the New American Nation. Den Hartog’s book illustrates that intense political conflicts over the relationship between Christianity and the American government are nothing new. In his book, Den Hartog argues that the religious dimension of Federalism (often lost in discussions of banking and commerce and the scope of the national government) is critical to understanding the way that a host of key players in early American politics (such as John Jay, Caleb Strong, and Charles Pinckney) understood their new nation. 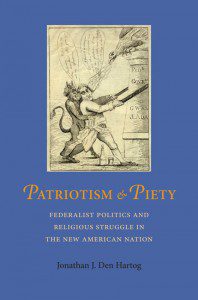 Readers may have heard about the sensation in New York that is the musical Alexander Hamilton, currently playing off-Broadway but planning to move onto Broadway this summer. If you want a sneak peak of the intro number, performed several years ago at the White House, you can watch it here. Lin-Manuel Miranda has not only written the score, he stars as Hamilton.

If Hamilton is experiencing a comeback, I thought he deserved a moment in The Anxious Bench.

Although most people wouldn’t connect Hamilton and religion in America, there are several strands of his life that bear examining. In fact, in a famous article from 1955, Douglass Adair provocatively asked, “Was Alexander Hamilton a Christian Statesman?”

Without going as far as Adair, I think we can see elements of faith in Hamilton’s life. They were most on display early and late. As a young man, Hamilton interpreted events in a strongly providentialist vein, and his writing about a Caribbean Hurricane brought him to the attention of American colonial Presbyterians. In fact, Hamilton was scheduled to attend college at Princeton–where he would have studied under John Witherspoon–until he realized that he could finish a year sooner by attending King’s College in New York (now Columbia). Near the end of his life, Hamilton also expressed increasingly pious sentiments. The knocks of a contentious public life and the death of a son–in a duel, no less–led him to a stronger participation in Trinity Episcopal Church in Manhattan. In between those periods, during Hamilton’s ambitious public career, there is much less expression of either practice or belief.

Still, in his last decade, Hamilton also called for a greater connection of public faith and organized political activity. In 1802, Hamilton wrote to James Bayard to propose a “Christian Constitutional Society.” This letter is interesting in its own right and for what it suggests about attitudes of the Federalist Party after Thomas Jefferson had become President.

Hamilton was advocating for greater organization to rally potential supporters to the Federalist side. He believed some emotional appeals would be necessary, since “Men are rather reasoning than reasonable animals, for the most part governed by the impulse of passion.” Federalists had been relying “so much on the rectitude and utility of their measures as to have neglected the cultivation of popular favor, by fair and justifiable expedients.” In other words, they had argued the logic and rightness of their cause without convincing people’s hearts. But, Hamilton insisted, the Federalists needed to “carry along with us some strong feelings of the mind.” Otherwise, he didn’t believe the Federalists would produce “any substantial or durable results.”

In my opinion, the present Constitution is the standard to which we are to cling. Under its banners, bona fide, must we combat our political foes, rejecting all changes but through the channel itself provides for amendments. By these general views of the subject have my reflections been guided.

To preserve the Constitution against the attacks of their political opponents, the Democratic-Republicans, Hamilton argued for a new political organization:

Let an association be formed to be denominated “The Christian Constitutional Society.” Its objects to be:

1st. The support of the Christian religion.

2d. The support of the Constitution of the United States.

To carry this plan out, Hamilton proposed a national organization to channel Federalist endeavors, the use of newspapers for partisan communication, and the formation of local societies that would be simultaneously charitable and recognized as Federalist.

What should we make of these suggestions?

It’s worth noting that this topic doesn’t come up again in Hamilton’s remaining years. In other words, this was an idea that Hamilton had, but not one that he would actively pursue or that would bear significant fruit. Moreover, most Hamilton biographers have seen this more as a political ploy than an idea arising out of deep faith. I am largely content with that reading.

Still, there are several intriguing things about Hamilton’s writing this letter at this time. One useful question might be to ask why Hamilton believed–or others at the time believed–that in America both the Constitution and Christianity were threatened. The 1790s and first decade of the 1800s were a time of great political and religious tumult in the country. Although the Constitution had set up a frame of government, much remained to work out, including the role that Christianity would or would not play in the republic. Because Americans didn’t know where the country would be going, they pursued religious campaigns and partisan politics with intense zeal. For all they knew, the country’s future development was hanging in the balance.

These debates about religion and politics received even more fuel as the news of the French Revolution arrived in America. The French had turned decidedly against their received Catholicism through the Jacobin process of de-christianization. Further, the initially hopeful Revolution had turned much darker, producing a Terror in 1793-94. Americans were apt to import political categories from abroad to speak about their opponents. So, to the Federalists, their Democratic-Republican rivals became Jacobins, with the term suggesting that they wanted to enact in America everything that had happened in France, including the use of the guillotine. These fears only grew across the decade, as America faced the possibility of war with France in 1798 (ultimately avoided) and then the prospect of a Democratic-Republic in the presidency, in the person of Thomas Jefferson.

So, although Hamilton’s proposal did not go anywhere, I would suggest that he reveals a common concern among many Federalists in the period. Apart from Hamilton, there really were many Federalists who wanted to defend both Christianity and the Constitution. These included men like president of Yale College Timothy Dwight, the minister Jedidiah Morse, and politicians like Elias Boudinot of New Jersey, Caleb Strong of Massachusetts, and Henry William DeSaussure of South Carolina. For them, the idea of linking a defense of the Constitution with the defense of Christianity was already clearly established. They would pursue those ideas through sermons, orations, publications, political activity, and cultural endeavors.

Thus, Hamilton was not so much an outlier as one who had picked up, second-hand, a very prominent approach to politics that linked religious and political concerns.

Want to learn more? I explore these ideas at length in my book Patriotism and Piety: Federalist Politics and Religious Struggle in the New American Nation.

May 1, 2015 The Seekers and the Sought
Recent Comments
1 Comment | Leave a Comment
"Impossible to read the entire article due to the unending pop-ups, but I like what ..."
Ann A. Jones The Cost of Staying Silent
"I agree that the theological debate is in "gridlock." It would be a major leap ..."
NorrinRadd The Evangelical Baptists Who Made “Biblical ..."
"Denny addresses those questions in his article.What he does not do is deal with the ..."
NorrinRadd It’s A Small, Small (Complementarian) World
"The only pertinent issue here is whether Baptists truly believe in the so-called "priesthood of ..."
Gussie FinkNottle The Evangelical Baptists Who Made “Biblical ..."
Browse Our Archives
get the latest from
Anxious Bench
Sign up for our newsletter
POPULAR AT PATHEOS Evangelical
1