In the middle of 1870, Scipio Africanus Kenner feared losing the girl he loved. For some time, he had been courting Isabel Park with her family’s encouragement. Then, suddenly, Park’s mother cooled on the match and asked Kenner never to visit the home again. Park, however, did not stop seeing Kenner. According to Kenner, Agnes Park then began berating and beating her daughter, desperate to impede a probable marriage.

Why the turnabout? Agnes Park believed that Kenner “had negro blood in [his] veins.” She informed her husband, then on a mission in Scotland, about the matter. If Kenner “mixed the blood,” Hamilton Park wrote, he would follow him “to the ends of the earth but he would be revenged.” It is possible that Kenner’s middle name alarmed Isabel’s parents, who did not know that Scipio Africanus was the Roman general who defeated Hannibal in the Second Punic War.

In other parts of the country, Kenner and Park may simply have eloped. They lived in Utah, however, and belonged to the Church of Jesus Christ of Latter-day Saints. So Kenner wrote Brigham Young about his case. There is no record of a written response from Young, but the two were sealed in marriage in December 1870. Kenner had cleared himself from the charge of Negro blood.

A sometimes actor, Kenner later joined a comedy troupe known as the “Negro Minstrelsy,” playing the role of “Sambo.” These white minstrels performed in blackface. Like many Americans, white Mormons found such shows uproariously funny. “He was secure enough in his whiteness,” observes Reeve, “to put on blackness with no fear of lingering suspicions over his own tainted blood.” 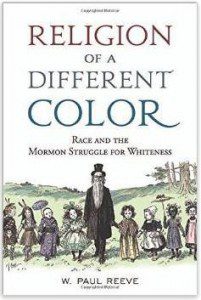 Scipio A. Kenner symbolizes the argument of Paul Reeve’s Religion of a Different Color: Race and the Mormon Struggle for Whiteness. There are many excellent books on the general subject of race and Mormonism, but Reeve makes a singular contribution. Many authors have studies aspects of the church’s long policy of denying priesthood and full access to temple ordinances to its black members. Other authors have observed that some of the church’s many nineteenth-century critics argued that polygamy was creating a new, inferior race in the American West. Reeve brings these two stories together in a richly researched and thoughtful narrative. Moreover, he integrates the complex story of Mormon racism and racialization with respect to Indians, blacks, Muslims or Turks, and Chinese Americans.

Reeve frames his narrative around a 1904 Life magazine of “Mormon Elder-Berry — Out with His Six-Year-Olds, Who Take After Their Mothers.” Those mothers were diverse: Indian, Chinese, and black, and various European peoples (this at a time when the racial categorization of some European peoples as “white” remained contested). Mormon Elder-Berry, by the way, looked a great deal like Church President Joseph F. Smith, then a center of national attention during the trial over the seating of Senator (and Mormon apostle) Reed Smoot.

Very quickly, Americans identified Joseph Smith as an “American Mahomet.” The Mormon claim to whiteness became contested partly through the Saints’ alleged alliance with Indians, and once rumors and then confirmation of Mormon polygamy spread, Americans argued repeatedly that the “Mormon race” in its degraded appearance and practices resembled a tribe of “savages.” “Mormons,” Reeve writes, “were persistently defined as ‘in-between’ people, neither securely white, nor nonwhite.”

Because their race was called into question, Mormons — sometimes more vigorously than others — pursued whiteness. Therefore, church leaders (and members) “turned their focus on other marginalized groups, especially blacks and Indians.” They concluded that their scriptures taught that these peoples were cursed, one almost beyond any hope of redemption. Mormons distanced themselves from nonwhite peoples in order to secure their own position of privilege.

Reeve’s book contains such richness that it is impossible to summarize all of its important arguments here. In particular, he provides a detailed account of the experiences of early black Mormons, the gradual emergence of ecclesiastical restrictions, and then the further hardening of those restrictions in the early twentieth century. Reeve makes a careful distinction between two early Mormon ideas about black people: that they were subject to a divine curse; and that they should not hold the priesthood. Latter-day Saints expressed the first idea in the 1830s, and it was widespread by the mid-to-late 1840s. Reeve, however, does not find clear evidence that any Mormon leaders expressed the belief that black men should not hold the priesthood until Brigham Young’s 1852 speech on the subject.

Second, Reeve discusses in great detail the passage of “An Act in Relation to Service” in February 1852 by the Utah territorial legislature. It passed with Brigham Young’s encouragement. The act, according to Reeve, “legalized white and black indentured servitude.” Reeve writes that for “black servants it implemented a version of gradual emancipation modeled after similar laws in Illinois and Indiana.” I disagree with this characterization in part. Note, at the very least, that this law involved the lifetime servitude of any black slaves brought into the state, as Reeve points out. This calls into question taking Illinois or Indiana as models. There is not enough space to examine all of the evidence here, but it is also not clear to me that the “Act in Relation to Service” freed the children of black “servants.”

According to Nate Ricks (see, for instance here), the final version of the bill eliminated the language placed in bold above. Even without that language, however, masters could be “entitled lawfully to the service of such servant or servants, and his, her, or their children.” There is no clear provision, in my reading, for gradual emancipation. I see ambiguity on this point. It is worth considering that southern slaveholders who were church members would probably have been loath to accept gradual emancipation, and this law apparently satisfied them.

Reeve, drawing on the work of Christopher Rich and Nate Ricks, contrasts southern chattel slavery with Utah’s policy of indentured servitude and gradual emancipation. I agree that Young did not want to codify southern-state chattel slavery, but I am still very comfortable with stating that this act codified slavery in Utah, in which Young professed to believe. I tend to read “servant” as a euphemism for slave here, and “service” chosen in part to avoid attracting negative attention from the Eastern United States.

Now, after that long digression, back to praising Reeve’s book. Anyone familiar with Mormon history will marvel at the rich and varied sources he consults. Notably, he identified and (with the help of LaJean Carruth) transcribed a key speech of Brigham Young’s related to the above-mentioned legislative session. From start to finish, however, the book is filled with first-class research and will prove an invaluable resource for students of Mormon history.

Some may approach this book and wonder if in focusing on the racialization of Mormons, Reeve somehow excuses or downplays the racism Mormons adopted toward nonwhite peoples. It seems to me that — as is true of studies of “whiteness” more generally — Reeve shows just how pervasive and complex notions of race were in nineteenth-century America. White Americans trying to explain Mormonism almost had to use race as one of their explanations for its development and deviance.

In a final chapter, Reeve quickly moves through the twentieth century, ending with the observation that Mormons quickly went from being “securely white” to “too white.” During the 2012 election, Democrats denounced Mitt Romney as the “whitest white man to run for president in recent memory.” It is perhaps obvious that many otherwise smart individuals write very dumb things during presidential campaigns. Until 2012, all major-party nominees for the presidency were very white white men. Similarly, commentators mocked the existence of black Mormons, failing to recognize that the LDS Church is more racially diverse than most mainline Protestant denominations, for instance. Most American Christians have preferred to forget their histories of race. If not of their own choosing, Mormons have been grappling with theirs.

April 1, 2015
Beyond Playboy: The Inner Life of Jimmy Carter
Next Post

April 3, 2015 Making the Messiah
Recent Comments
8 Comments | Leave a Comment
"In England at least I think most Quakers moved away from farming in the 17th ..."
Erp The Quakers: New England’s First Sustained ..."
"Listen to what Dr. King said? Yes. But, I believe it gets to the point ..."
douglas kraeger A Tale of Two Kings: Reflections ..."
"Christians must not ignore the systemic problems that create injustice. Evangelicals think that Trump is ..."
swbarnes2 A Tale of Two Kings: Reflections ..."
"Ration books was how it worked. People were allotted certain amounts of food in those ..."
Timothy Weston How Unique is Our Present Crisis ..."
Browse Our Archives
Follow Us!