The United States of Freberg

I cringe a bit when my children break into show tunes while in public. Selections from Joseph and the Technicolor Dreamcoat are fine (though they’re still stumbling through the “red and yellow and green and brown/And scarlet and black and ochre and peach/And lilac and gold and chocolate and mauve . . .” part). My worry is whether they’re going to sing “Take an Indian to Lunch.”

It’s a catchy song with impolitic title. But the words, which point to the racism embedded in American history, are rather subversive. But sometimes the subversion is not always apparent to others when the kids bounce down the hiking path singing the following words at the top of their lungs:

After all, we came over on the Mayflower!

The song is the product of Stan Freberg (1926-2015), a self-described “guerilla satirist” who died last week. The New York Times did a nice write-up of Freberg’s legacy, which mostly had to do with advertising. He won the top industry award 21 times and had an exceptionally eclectic clientele that included General Motors, the United States Army and the Presbyterian Church. In 1958 he opened his own agency with the following slogan: “More Honesty Than the Client Had in Mind.”

Freberg’s genius was to insert a self-deprecating humor into commercials. He especially liked, as the Times put it, “lampooning the deficiencies of a paying client’s own products.” In Pacific Airlines advertisements, he confronted people’s fear of flying by telling people that even the pilots were afraid. As part of the campaign, flight attendants passed out “survival kits” that included security blankets, a lucky rabbit’s foot and fortune cookies bearing the slogan “It could be worse.”Upon landing, the attendants were encouraged to exclaim: “We made it! How about that!”

As most satirists do, this mocker of modern consumerism had a serious side. Freberg was a social prophet. After being chosen to succeed Jack Benny on CBS radio, he got fired after refusing tobacco advertisements and joking about the proliferation of the hydrogen bomb. The son of a Baptist minister and vacuum-cleaner salesman, he also took satirical aim at American history. This was reflected in my favorite album, “The United States of America, Volume One: The Early Years” (1961), the one my children have memorized because of its witty dialogue and catchy show tunes.

In this beautifully produced album, Freberg uses historical anachronism to brilliant effect. He describes how therapists used sublimation to relieve the anxiety of early American explorers. He explains that Columbus came to America on a Fulbright. The Europeans that followed him were drawn by the bounty of organically grown fruits and vegetables. And that Columbus wanted to get a loan to open an Italian restaurant in the New World but can’t because the banks were closed for the Columbus Day holiday.

He also uses historical absurdity. In “Take an Indian to Lunch,” Freberg sings about an early Puritan politician who strategically takes an Indian out to eat in order to secure the Native American vote. In a song about the first Thanksgiving, the bald eagle displaces the wild turkey as the national bird—because they cooked the wrong bird. Columbus has to leave the Spanish palace by a balcony because King Ferdinand finds him with Queen Isabella. Betsy Ross complains that George Washington tracked snow all over her early American rug. And Washington complains that Ross used red, white, blue, stars, and stripes in her design of the flag. “Why couldn’t it have been puce—or lavender over chartreuse?” he laments. 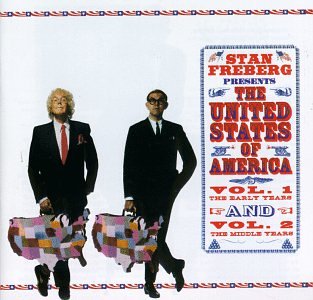 In the context of a pervasive jingoism in the wake of WWII, this affectionate but irreverent recitation of American foibles was a helpful antidote to a mean McCarthyism during the Cold War. In the song “Declaration of Independence,” Freberg plays Benjamin Franklin and sings, “You sign a harmless petition and forget all about it. Ten years later, you get hauled up before a committee.” Freberg reminded Americans that the founders, in their “purfuit of happineff,” had clay feet and that their documents were (and are) imperfect. In fact, the founding fathers were not conservative themselves, despite the insistence of their biggest modern-day conservative boosters. In the revolutionary context, they were “professional liberals” and “wild-eyed radicals.”

As you might expect, Freberg provoked immoderate reactions. Lots of famous people—including Paul McCartney, Stephen King, “Weird Al” Yankovic, and David Mamet—loved him. So did lots of not-famous people, like many conservative Mennonites I grew up with. But, of course, like many prophets, Freberg was not always welcome in his hometown. Cold War hawks thought it was Freberg who was the “wild-eyed radical.”

But Freberg didn’t care. In the final scene of “USA, Volume 1,” a grouchy lady confronts him and announces, “I’m from the Daughters of the American Revolu-“ Freberg slams the door as bombastic patriotic music closes the album.

April 16, 2015 The Mormon Bonhoeffer
Recent Comments
0 | Leave a Comment
Browse Our Archives
get the latest from
Anxious Bench
Sign up for our newsletter
POPULAR AT PATHEOS Evangelical
1