As Donald Trump has maintained strong leads in primary states like South Carolina, some observers like Matt Lewis have begun to speculate about what it would be like if this guy actually became president. I still believe (and fervently hope, for the sake of the republic) that Trump has no chance of becoming president, but I am reluctantly starting to realize that he could indeed win the Republican nomination. If that is the case, “Republicans” (whomever they may be) will have squandered any shot at the presidency for 2016. I still like to think that people of good sense will unite and stop Trump’s reality show from relocating to the White House.

What is more interesting to me than the unlikely prospect of a Trump presidency, is what his nomination might do to the already-fragile links between the GOP and the people whom I have often called “paleo evangelicals.” These folks are not liberals in any sense, but they have been disheartened by the paltry results produced by the thirty-five year alliance between white evangelicals and the GOP. They have squirmed as the GOP has repeatedly nominated candidates (like Mitt Romney) with weak credentials on issues that matter most, such as the right to life for unborn children.

It is hard to say how badly a Trump nomination would damage the Reagan-era union between evangelicals and the GOP. I know that polls suggest that Trump has strong “evangelical” support, but polls also suggest that “churchgoing” evangelicals (as if there is such a thing as a non-churchgoing evangelical!) don’t support Trump as much. I hope that a Trump nomination would lead to a significant defection of Christian voters from the GOP, at least for the 2016 presidential race. Most defectors would simply not vote for one of the two major parties’ nominees, while others would vote for the Democrat. There was not nearly as much disaffection from John McCain and Mitt Romney as you would see with a Trump nomination.

For what it is worth, here’s the bottom line for me, a conservative Christian who typically votes Republican, but has never been all that enamored with the GOP. I will not support Trump under any circumstances, and I would use what little influence I have to stop him from being elected president. If that means that Hillary Clinton or another Democrat gets elected by default, I am fine with that. How many other “evangelicals” there are like me, I don’t really know. Anecdotal information from WORLD Magazine’s survey of evangelical insiders (in which I have participated) suggests that he has virtually no support among the people WORLD is asking.

I held my nose and voted for McCain and Romney – but Trump is an entirely different question. I will not vote for someone so boorish, who has no clue about most basic political issues, much less those most important to Christian conservatives (including religious liberty and abortion). I will not vote for a misogynist reality tv star whose campaign is based on starting stupid fights. I won’t do it, and I hope that millions within the supposed GOP “base” would join me.

[Friends, you can sign up here for my Thomas S. Kidd author newsletter. Each newsletter will update you on what’s happening in my writing and in the world of American religious and political history. It will contain unique material available only to subscribers, and each will help you keep up with my blog posts, books, and other writings from around the web. Your e-mail information will never be shared. Thanks!]

October 21, 2015 How to Start a Writing Group
Recent Comments
224 Comments | Leave a Comment
"Very interesting topic! I hope students follow your advice! I have been amused by Catholic ..."
Roger McKinney A Forgotten Hatred: Why Don’t We ..."
""Said even more strongly, the assumption is that if one thinks that the Gospel is ..."
Chaplain Blake Liberation Theology for White People: The ..."
"Please show us where liberation theology has liberated anyone. On the other hand, slightly freer ..."
Roger McKinney Liberation Theology for White People: The ..."
"Racism is a denial of Christ on every level. But I don't see "... institutions ..."
Roger McKinney Listening to George Kelsey: Racism as ..."
Browse Our Archives
Related posts from Anxious Bench 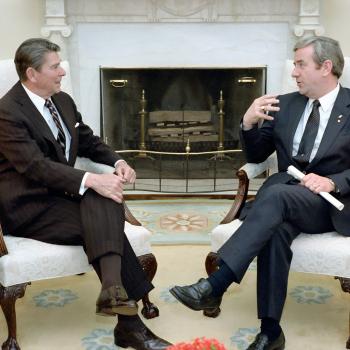 Evangelical
It Wasn't the Religious Right That Made White...
Anxious Bench
TRENDING AT PATHEOS Evangelical

"Religion Stands on Tip-toe in Our Land"
Projections that Christianity will dwindle in America call to mind George Herbert's...
view all Evangelical blogs
What Are Your Thoughts?leave a comment
Copyright 2008-2021, Patheos. All rights reserved.
Close Ad