The Problem of Inequality–for Puritans

It’s that time of year when New England muscles into the spotlight, showing off Patriots and scarlet maples, clear skies and Salem-witch shenanigans.

But showing off–and the way that exacerbates anxieties of economic inequality—is not the New England way, at least not from the region’s seventeenth-century colonial beginnings. It should be said straightaway that the builders of the Massachusetts Bay Colony were for inequality. The settlers we call New England Puritans assumed and approved distinctions between those of higher and lower condition, flowing from one’s family, work, manners, education, and property.  After all, the opening gambit of John Winthrop’s well known “A Model of Christian Charity,” an address most familiar for calling the colony to be “as a city on a hill,” affirms that “in all times some must be rich, some poor, some high and eminent in power and dignity; others mean and in submission.”

In this season of dressing up as other than one’s ordinary self, Puritans’ sumptuary laws, the rules they made forbidding people to dress above their station, might appear a peculiar way of enforcing inequality.   Colonial Massachusetts repeatedly passed these orders to discourage the lowborn from overstepping their bounds. In language described as positively medieval, the General Court bemoaned,

Although several declarations and orders have been made by this Court against excess in apparel, both of men and of women…[we] declare our utter detestation and dislike that men or women of mean condition, educations, and callings should take upon them the garb of gentlemen, by the wearing of gold or silver lace, or buttons, or points at their knees, to walk in great boots; or women of the same rank to wear tiffany hoods or scarves, which though allowable to persons of greater estates, or more liberal education, yet we cannot but judge it intolerable in persons of such like condition[.]

That’s inequality with an edge. Harsh though it may have been to insist that those who had little had to dress like it, this culture insisted that the way persons earned, amassed, and expended wealth had consequences for the community as a whole.  (We might note in passing that liberal education could help a social climber pass muster.)  While some laws targeted lower classes angling up, other rules reproved the rich. Ostentation in clothing didn’t cut it for the wealthy either, as pronouncements against slashed sleeves—showy styles designed to flaunt the fine fabrics underneath—attested.   The rich were not immune from judgment. In a most spectacular example, successful merchant Robert Keayne was fined the huge sum of £200 for “oppression,” that is, for taking too high a profit on a bag of nails. Accumulation of wealth could be legitimate and honorable, but its chief purpose was not the acquisition of stuff. And certainly not conspicuous display, a preference upheld still in New England, where luxury shows most in understatement, and thrift–as in a recent send-up of Bernie Sanders’s wardrobe—is a good thing.

Furthermore, while Puritans rejected social mobility in principle, in practice they positively fast-tracked it through an earnest work ethic. While profoundly uneasy with the consequences of these economic habits, they esteemed hard work with theological justification and institutional encouragement. Wide opportunity for skilled workers could upend relationships between richer and poorer, as Governor Winthrop recorded in an exchange between a master and servant in Rowley, Massachusetts:

The master, being forced to sell a pair of his oxen to pay his servant his wages, told his servant [that] he could keep him no longer, not knowing how to pay him the next year. The servant answered [that] he would serve him for more of his cattle. But [what] whall I do (saith the master) when all my cattle are gone? The servant replied, you shall serve me, and so you may have your cattle again. 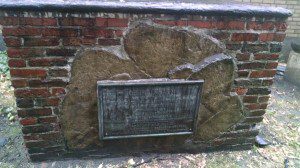 In such an environment worry about overdressing might be understandable, and the assumption that displays of wealth matter to the whole community is not at all bad.

October 27, 2015 Choosing a Book or Dissertation Topic
Recent Comments
0 | Leave a Comment
"Actually, a couple of things are at work here. England was radically different because Common ..."
philipjenkins Of Revivals, Convulsions, and Witchcraft Panics
"As I understand it, in Spain, ironically, the witchcraft craze scarcely happened at all because ..."
Iain Lovejoy Of Revivals, Convulsions, and Witchcraft Panics
"All fair comments. I was mainly thinking of their relationship to the respective institutional churches. ..."
philipjenkins Of Awakenings, Convulsions, and Writing Christian ..."
"Oh, okay. I do see parallels in the sociological and emotional senses.I was thinking more ..."
Daniel Wilcox Of Awakenings, Convulsions, and Writing Christian ..."
Browse Our Archives
get the latest updates from
Anxious Bench
and the Patheos
Evangelical
Channel
POPULAR AT PATHEOS Evangelical
1