The Mayflower pilgrims anchored at what is now Provincetown Harbor on the south side of the Cape Cod hook on November 11, 1620 (November 20 by our calendar).

they fell upon their knees and blessed the God of heaven, who had brought them over the vast and furious ocean, and delivered them from all the perils and miseries therof, again to set their feet on the firm and stable earth, their proper element.

As Nick Bunker writes in his history of the pilgrims (Making Haste from Babylon), William Bradford may well have pointed to this moment at the first Thanksgiving in America. At least retrospectively, however, it is unclear that the Pilgrims found all that much to be thankful upon their arrival.

Indeed, Bradford proceeds from this description of their landfall to discuss how pitiable their condition was. “[T]hey had no friends to welcome them,” he relates, “for inns to entertain or refresh their weather-beaten bodies, no houses or much less towns to repair to, to seek for succor.” It was already winter and a forbidding landscape awaited them. “What could they see,” Bradford writes, “but a hideous and desolate wilderness?”

According to Nick Bunker, Bradford greater admired the Separatist author Henry Ainsworth, whom Bradford praised as “a man of a Thousand … pregnant in the Scriptures as if the book of God had been written in his heart.” Bradford owned a copy of Ainsworth’s Annotations upon the Five Books of Moses, which reflects Ainsworth’s knowledge and love of the Hebrew original. Ainsworth made his own translations of the Torah and the Psalms, and he immersed himself in the writings of the twelfth-century Jewish philosopher Moses Maimonides, who taught him to search passages of scripture for multiple, deep, hidden meanings.

According to Bunker, Williaim Bradford began teaching himself Hebrew four decades after reaching New England. One word he wrote out carefully was midbar, meaning wilderness. Ainsworth devoted considerable attention to this word, so important in the Torah in connection with Hagar, Moses, and the people of Israel after their exodus. Per Bunker, for Ainsworth midbar “meant a place where men go wild and go astray, a land without order, a dwelling fit only for beasts, a place where God puts his people to the test of affliction … a place of hunger and thirst, bodily starvation but also a famine of the spirit.” In addition to danger, however, it also pointed to epiphanies of the divine and God’s promise to rescue his people.

Thus, for Bradford, the voyage across the ocean was fraught not only with physical threats but also spiritual danger, for instance in the form of hostile sailors. The pilgrims expressed heartfelt thanks to God that he had brought them safe thus far, but one can imagine the sense of foreboding they felt as they gazed at a wilderness and contemplated their fragile situation.

After those meditations on the American wilderness, Bradford encourages the sons and daughters of the Mayflower pilgrims to think of their parents and grandparents in the following fashion:

Our fathers were Englishmen which come over this great ocean, and were ready to perish in this willderness; but they cried unto the Lord, and he heard their voice, and looked on their adversity, etc. Let them therefore praise the Lord, because he is good, and his mercies endure forever. Yea, let them which have been redeemed of the Lord, show how he hath delivered them from the hand of the oppressor. When they wandered in the desert wilderness out of the way, and found no city to dwell in, both hungry, and thirsty, their soul was overwhelmed in them. Let them confess before the Lord his loving kindness, and his wonderful works before the sons of men.

Here Bradford quotes and adapts Psalm 107 in the language of the Geneva Bible. At least in Bradford’s recollection, the Pilgrims confessed God’s lovingkindness, perhaps as a way to steel themselves for the starving and mournful months that lay ahead. 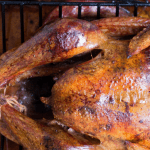 November 25, 2015
Eating Eel: Your Guide to an Authentic Thanksgiving
Next Post

November 27, 2015 Mani and the Giants
Recent Comments
0 | Leave a Comment
Browse Our Archives
get the latest updates from
Anxious Bench
and the Patheos
Evangelical
Channel
POPULAR AT PATHEOS Evangelical
1