For the unfamiliar (that includes me), the Qur’an is an imposing, rather intimidating scripture. Unlike the Bible, it doesn’t contain long chunks of historical narrative that allow one to advance in something like chronological order. Without knowing the context of the individual sections (or sections of sections), one encounters a bewildering array of spiritual, legal, and political-military counsel. 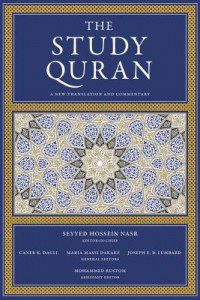 In my introductory courses (most typically an introduction to Judaism, Christianity, and Islam), I assign the Harper Collins Study Bible (NRSV) and a translation of the Qur’an. I have been using M.A.S. Abdel Haleem’s very readable translation.

Setting aside the fact that more students come from Christian than Muslim backgrounds, it’s comparatively much easier for students to sing their academic teeth into at least portions of the Bible. We read major sections of Genesis and Exodus, then portions of the David narrative in Kings and portions of Isaiah. Granted, it would be tougher if I asked them to read, say, Numbers or Habakkuk. But those narrative histories are relatively accessible. Out of the New Testament, we usually read the Gospel of Mark, portions of Acts, the first half of Romans, and a few bits from the Book of Revelation.

The editors of the HCSB, moreover, provide considerable guidance for students, regardless of their previous level of familiarity with the text. They will get a sense of critical biblical scholarship, and they will understand some of the points of connection between, say, Genesis and other ancient literature such as the Epic of Gilgamesh and the Enuma Elish. Okay, I’m lucky if students read the assigned texts, but the scholarly apparatus is there for the curious!

I have no extensive familiarity with translations of the Qur’an. But while Haleem’s translation is quite accessible in terms of its prose, it does not come with much else. In a sense, that’s not the end of the world. Perhaps it’s better for students to concentrate only on the text itself, learning to interrogate it and raising questions of curiosity and concern in class. (Unfortunately, I would be of fairly little use in answering such questions). My experience, however, is that without considerable guidance, most non-Muslim students quickly feel overwhelmed by the Qur’an. Because of that, I’ve often assigned Sura 12 (“Joseph”), which they read in conjunction with the Joseph narrative in Genesis. Then, they read passages that discuss Jesus, as well as portions that discuss subjects ranging from women to war. For a variety of reasons, I’m not as satisfied with our classroom discussions of the Qur’an.

Thus, I’m extremely pleased by the appearance of HarperOne’s The Study Quran, a project headed by Seyyed Nasr. One of my colleagues at George Mason, Maria Dakake, is one of the contributing editors.

The publication of The Study Quran is a landmark. It contains an original translation of the Quran, which is also very readable. It also contains an extensive scholarly apparatus, pointing readers to the ways that Quranic verses have been interpreted, especially during the first several centuries after the life of the Prophet Muhammad. This is enormously useful, as are the topical essays, which discuss everything from Sufism to Islamic art to “Death, Dying, and the Afterlife in the Quran.” The careful introductions to hadith sources at the back of the volume are also very helpful.

Unlike the Harper Collins Study Bible, at least as far as I can discern, The Study Quran is less concerned with introducing students to critical (i.e., non-Muslim or very progressive Muslim) scholarship on the Quran, so it is not an exact parallel. Nevertheless, I’m very grateful to have something to assign for my introductory students that will help them make better sense of the Qur’an and how Muslims have interpreted it.

The Qur’an has become such a hot-button issue in contemporary American political culture. Is it full of violence? Is it misogynistic? What does it say about Jesus or Jews?

It’s a rather too flippant answer to say: Read the book. Reading the book is a great idea. But reading any unfamiliar scripture is no simple matter. For starters, the mere fact of translation means that one is reading an interpretation, so one must choose wisely. And since scripture is always a matter of interpretation, it’s essential that one not only reads texts but gets a sense of how communities have interpreted them. So, yes, read the book for yourself, but look to tools such as The Study Quran for help in grasping how Muslims have understood their sacred text.