The Invention of God

The Invention of God January 21, 2016 johnturner

Thomas Römer’s The Invention of God is a provocative, brilliant, and challenging book.

– groups of people in the ancient southern Levant came to worship a storm God named Yhwh (or another close variant of that name);

– that the peoples of ancient Israel and Judah worshiped Yhwh, El, and a goddess named Asherah, among other deities;

– that these same peoples gradually made Yhwh their tutelary or national deity and attributed to him many of the characteristics and functions of these other deities;

– that in sanctuaries at Bethel, Jerusalem, and elsewhere, ancient Israelites built and worshiped boviform and anthropomorophic statues of Yhwh;

– that in the wake of the northern kingdom’s conquest, reforms under King Josiah insisted that Judeans should worship Yhwh alone;

– that during the Persian period that followed the Babylonian exile, the priests and scribes at Jerusalem further asserted that Yhwh was the sole God of the universe. Also, they insisted that there should be no statue of Yhwh in the rebuilt Jerusalem temple. 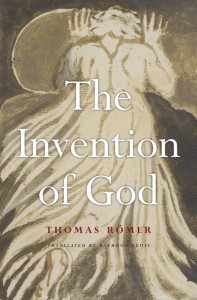 Römer’s basic reconstruction of the emergence of Jewish monotheism out of the rubble (so to speak) of ancient Israelite religion is not new, as the centrality of the post-exilic period for the redaction of the Torah and the creation of Judaism is well known. The Invention of God, however, is original in many of its details, meticulous in its discussion of a wide variety of biblical and extrabiblical sources, and refreshingly candid at many points. Römer is not afraid to claim certainty for his conclusions in some instances, but he also does not hesitate to point out when his suggestions are more tenuous.

The Invention of God is accessible to non-specialists, and Römer summarizes his conclusions periodically. Still, non-specialists will need to do some heavy lifting to appreciate the particular arguments. As one of those non-specialists, I cannot offer an informed critique of Römer’s scholarship. See Ryan Thomas’s recent review here for such a response.

Instead, several thoughts on the book. First, those with an interest in biblical criticism should pay attention to the way that Römer discusses the construction of biblical texts. He writes that “it is no longer possible to accept the ‘documentary theory,’ which explained the genesis of the Pentateuch by reference to the purported integration into one narrative of four successive and parallel documents.” Instead, Römer perceives that both Yhwh and the Torah have longer and more complex histories. By “invention,” Römer does not mean “made up.” Instead, he suggests that the ancient Israelite and then early Jewish ideas about Yhwh changed dramatically over a long period of time and that one can find textual evidence of those evolving conceptions:

We should not imagine … that a group of Bedouins met one day and huddled around an oasis to create a God for themselves, or that some scribes, much later, invented Yahweh out of whole cloth, so to speak, as their tutelary god. Rather this “invention” should be understood as a progressive construction arising out of a particular tradition. Think of this tradition as a series of sedimentary strata gradually laid down over the course of time, which is then sometimes disrupted by historical events that disturb the orderly sequence of layers.

Second, Römer positions himself as a moderate between “maximalist” and “minimalist” interpreters of biblical history. The former, he explains, presume that the Bible is factually or historically accurate without clear evidence to the contrary. Minimalists, by contrast, contend that the Bible is worthless in terms of evidence for reconstructing the history of the ancient Israelites. At first glance, Römer rejects both positions. “The maximalist,” he explains, “violates basic methodological principles of historical research; the minimalist neglect that no matter how ideological the biblical texts are, they might nevertheless contain traces of historical events and of earlier traditions.”

In his discussion of the United Kingdom, of Josiah’s reforms, and of the exile — to name a few examples — Römer does allow that biblical texts contain “traces of historical events.” Most non-specialists will find those traces, however, to be rather minimal. Thus, despite the way Römer positions himself, general readers will find The Invention of God rather minimalist in its use of the Bible as a source for reconstructing the history of the ancient Israelites.

Many Christians, I imagine, would find The Invention of God troubling, and not just for the title. When reading the book, I once again felt caught between two ways of reading the Bible. Does it contain the sayings of God, the records of God’s actions, and narratives of God’s people with at least a substantial basis in history? Or does it contain a collection of texts that illuminate the many ways in which ancient peoples imagined, worshiped, and communed with God (or gods)?

Several years ago, I encountered B.B. Warfield’s essay on “The Divine and the Human in the Bible” through Mark Noll’s Jesus Christ and the Life of the Mind. Warfield warned against seeing the divine and human aspects of scripture as “as factors in inspiration that strive against and exclude each other so that where one enters the other is pushed out.” That line of reasoning, Warfield observed, leads to the false conclusion “that every discovery of a human trait in Scripture is a disproving of the divinity of Scripture.” In other words, Warfield warned against making arguments about biblical criticism a “zero-sum” game. After all, Christians believe in a fully divine and fully human Jesus, that God took on corruptible flesh, that God was and is in der Mitte “in our midst” (to quote a hymn from the German Pietist Gerhard Tersteegen). Still, when it comes to the Bible, at a certain point does its messy humanness obscure Christian claims for its divinity?

At the same time, acknowledging that messy humanness — the human invention and reinvention of God, in Römer’s terms — is not only perilous for believers. It also has distinct benefits. As my co-blogger Philip Jenkins has reminded us, the Bible contains a number of texts in which God orders or celebrates violence, including violence against civilians. For instance, Samuel informs Saul that “the Lord” (Yhwh) has commanded him to “go and attack Amalek, and utterly destroy all that they have; do not spare them, but kill both man and woman, child and infant, ox and sheep, camel and donkey.” Placing such narratives within a long history of textual construction makes it easier to understand such terrifying commandments as the expressions of particular times and places rather than as the exact wishes of God.

Römer contends that the Bible “must be analyzed historically without preconception, just like any other document from antiquity.” It is hard to imagine that very many individuals (believers and skeptics alike) could analyze the Bible “without preconception,” but I do not think that Christians should hesitate to engage Römer’s attempt to do so. Nor do I think that such a methodology is the only way in which Christians should engage the Bible. Hardly. Still, to return to the words of Tersteegen’s hymn, “God himself is present,” in our midst even in our sometimes painful attempts to understand his “past.”

January 20, 2016
The Global Context of InterVarsity and #BlackLivesMatter
Next Post

January 22, 2016 The Hadith and the Jews
Recent Comments
9 Comments | Leave a Comment
"I have got to believe that God's hand is in this to open our eyes, ..."
stefanstackhouse A Letter about COVID to My ..."
"Yeah, that's its own interesting psychological profile. Hopefully you can see them as victims of ..."
Christy Stop Biblical Womanhood
"It's amazing how fast and how far some patriarchalist *women* will jump down our throats ..."
NorrinRadd Stop Biblical Womanhood
"It's a great, fascinating book.I do have a few pedantic quibbles. The first that comes ..."
NorrinRadd The Making of Biblical Womanhood: The ..."
Browse Our Archives
get the latest from
Anxious Bench
Sign up for our newsletter
POPULAR AT PATHEOS Evangelical
1

What is God Really After?
Watch (or listen to) the video to find out ... ﻿
view all Evangelical blogs
What Are Your Thoughts?leave a comment
Copyright 2008-2021, Patheos. All rights reserved.
error: Content is protected !!