I am presently writing a book about the couple of centuries preceding Jesus’s time, and over the past year or two I have written quite a few blogs about issues relating to that topic. One of the persistent problems I have relates to capitals and upper case letters. That may sound trivial, but it actually gets to some quite critical issues of translation and interpretation.

When we use capitals, we are making a clear statement about the words that we so dignify. We are stressing that those words represent something special, perhaps THE example of its kind, rather than any generic example. In religion, we mean something totally different if we refer to Virgin rather than virgin, or if we refer to the Father and the Son, rather than the father and the son. To write of God is usually to refer to the one absolute and transcendent Creator (see, I capitalized that – did you notice?) while a god is a more commonplace thing. Often, our editorial decisions carry quite unintentional theological weight. 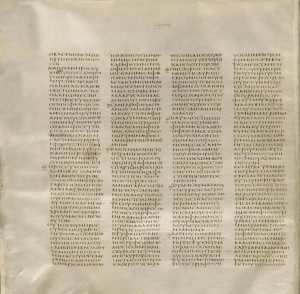 (Image is in public domain)

Hence, there is no distinction between upper and lower case, and thus (in our sense) no word is dignified or distinguished by a capital.

You see what a difference capitals make? Not to mention the decision to translate a word in one particular form, rather than retaining its literal and original meaning.