Whatever happened to America’s crusades?

Once upon a time, crusades were an integral part of American rhetoric, indicating a noble or righteous struggle inspired by higher motives. All sorts of political causes were “crusades”, not to mention the overtly military ones. You actually could write an excellent history of American religion and reform through the lens and language of crusade. The Temperance movement had its crusades, women crusaded for the vote, and the Purity Crusade was a key force in moral and sexual reform in the nineteenth century. Billy Graham had his legendary revival crusades. When Dwight Eisenhower wrote his memoir of the war years, it was entitled Crusade in Europe.

Incidentally, one of Britain’s best World War II era tanks was the Crusader. Mind you, Britain was even-handed in such matters, and for many years the army had a fine armored car called the Saladin, commemorating the greatest Muslim opponent in those medieval struggles.

As recently as 1989, we had the film Indiana Jones and the Last Crusade.

Just to indicate how mainstream and non-controversial such crusading ideas once were, I offer this impressive 1918 poster, which advertised a major US propaganda film from the Great War. Note the ghostly medieval warriors shadowing the advancing doughboys. 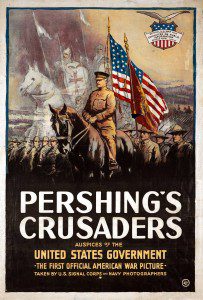 This image is in the public domain: Library of Congress

As usual, click on the image for more detail.

The “crusade” element is actually not all that marked in the film itself, but this is an interesting framework. By the way, lots of European countries also used similar visuals in the First World War, but this is just a particularly obvious one.

In popular culture, one rare critique of crusade came in the 1938 Adventures of Robin Hood, but it is mild. Robin (Errol Flynn) criticizes King Richard for going on crusade only because the monarch is neglecting his duties in England, and leaving the country to bad Prince John.

Historically, of course, nobody in the West needed to be concerned about potentially offending Muslims until they actually had Muslims to deal with. European powers were aware of this issue rather earlier than Americans because of their colonial links. The British, for instance, were anxious to avoid anyone referring to their First World War activities in Palestine as a Crusade, for fear of offending million of imperial subjects in Egypt and India. Not that such concern stopped the popular media from engaging freely in crusading rhetoric, especially when the British took Jerusalem in 1917. Did this not fulfill the dreams of Richard the Lionheart?

At some point since the Indiana Jones film, the crusader concept became not just discredited for Americans also. And not just discredited, but actively toxic, suggesting religious fanaticism and even Islamophobia. I suppose the turn came soon after 9/11, but I am open to being educated on that. President Obama has invoked the crusades as a lesson to Christians on their alleged bigotry, and why they should not focus so exclusively on Muslims for religious violence. (I quote his view without necessarily agreeing with it)).

That change of attitude has had repercussions, beginning of course on college campuses. I quote Wikipedia:

Schools who have done away with the “Crusaders” mascot include Point Loma Nazarene University (now the Sea Lions), Eastern Nazarene College (now the Lions), Susquehanna University, The University of the Incarnate Word (the new mascot, the Cardinals, was chosen by students) and Wheaton College.

What is ironic in all this is that Islamic historians and writers themselves never portrayed the Crusades in particularly religious terms, or understood it as a Christian-Muslim confrontation. At the time, and for centuries after the event, they usually referred to the Wars of the Franks, that is, as an ethnic or regional label. They rarely associated the Christians they knew in the Middle East with the foreign Franks  who used the same label, or indeed recognized that the two movements were part of a global movement. Only in the nineteenth century did Muslim writers see the Crusades as a kind of militant Christian imperialism. In the past two decades, both al-Qaeda and Daesh have commonly referred to their Western enemies as the Crusaders.

Obviously, the Crusades were multiply tainted, perhaps more than anything by the anti-Jewish savagery that they repeatedly unleashed. Generally, of course, later generations saw those incidents as ugly manifestations that were departures from the original good cause, rather than as integral elements of that cause. To the best of my knowledge, American Jews never complained about “crusader” rhetoric when used by someone like Eisenhower or Billy Graham, or am I wrong about that? Nobody batted an eyelid when the word was used in the Indiana Jones film.

But I wonder if we might some day return to the image of the Crusade as a righteous struggle. Or is the word in that sense dead for all time?

May 5, 2016
The Puritan Way of Seeing Christ
Next Post

May 9, 2016 For This I Went To College!
Recent Comments
4 Comments | Leave a Comment
"Impressive article. Provides the necessary perspective for entering into an informed discussion about the science/religion ..."
the old scribe Science, Religion, and Nineteenth Century Protestantism
"Very helpful! Thanks! It seems history has always been used as a weapon."
Roger McKinney Science, Religion, and Nineteenth Century Protestantism
"You have done nothing to refute my point. Certainly we should do the affirmative things ..."
NorrinRadd Ron Sider and the Fate of ..."
"When we try to prohibit behavior that many people consider, we simply drive the behavior ..."
Silverwolf13 Ron Sider and the Fate of ..."
Browse Our Archives
Related posts from Anxious Bench