The Crisis of Corporate Evangelicalism (Part 1)

Part 1: who are the “corporate evangelicals?”

These have been banner days for those of us who study conservative evangelicalism; less so for those who claim that identity. Over the last two years, the movement that once seemed to be the paragon of political discipline has come apart at the seams. This was not caused by outside forces alone; as the recent proliferation of “I’m an evangelical, but… ” commentary suggests, it stems also from an identity crisis born within the movement.

Pundits everywhere know something is happening, but explaining these developments is a complicated task. There is the perennial difficulty of defining evangelicalism. There’s also the fact that evangelicalism has never been monolithic—with important differences even among self-identified conservatives.

I’ll be painting with a broad brush in what follows—and to be clear, these characteristics are not the sole possession of corporate evangelicals. But taken together, they capture the overarching ethos of this subgroup. It is a composite sketch that in later posts we can then compare with other parts of the evangelical coalition, vying for dominance.

Corporate evangelicals are found primarily among the white, college-educated, middle-classes who reside in, and around, America’s urban centers. Many attended a Christian liberal arts college. Others attended a public university (fewer, an Ivy-League institution), and were involved with an evangelical student group like InterVarsity or Cru. They are married, live in a comfortable suburb or gentrified neighborhood, and are business owners or employed as a professional, manager, or engineer. Some who started in these fields, feel called to the ministry and become pastors or missionaries.

The politics of corporate evangelicals are largely conservative, but they avoid Tea Party antics.  In the recent primary season, they rallied around Marco Rubio. They were suspicious of Ted Cruz and horrified by Donald Trump. Most espouse the “family values” that has given conservative evangelicalism a semblance of coherence over the last thirty-five years. This means they oppose abortion and defend what they see as “traditional marriage.” But they avoid the harder-edged absolutism that some evangelicals display: they support exemptions for abortion prohibitions in difficult cases, and some would support secular civil unions for same-sex couples.

Corporate evangelicals have their non-negotiable “truths” (whether theological or social), but these lists are short. They fight when they feel cornered, but prefer to find common ground or, failing that, to agree to disagree. Their irenic disposition is aided considerably by a lack of strong attachments to particular denominations or churches or religious leaders. They are Protestant free agents, moving on when a connection is no longer productive. Such transitions are no more fraught than exchanging sports heroes, or a favorite actor, or a neighborhood cafe.

Corporate evangelicals are, above all, impeccable consumers of both spiritual and secular goods. Their preferences can vary considerably from each other: some favor the emergent church, others the sturdy and predictable worship experience afforded by a Willow Creek Association or Saddleback church. Still others might gravitate to small neighborhood congregations or a neo-monastic experience. But whatever the flavor, their choices are tasteful, avoiding ostentation and kitsch. Their chosen church will hew closely to their preferred variety of evangelical orthodoxy, but also will avoid excessive rancor. (Though here we should acknowledge that one person’s “faithfulness” can be another person’s divisiveness.)

The constancy of a corporate evangelical faith resides not in external connections, but in the individual’s personal relationship with God. What matters is that you go to Sunday worship, not necessarily where you attend. But even more important are personal devotional practices. Prayer is the means by which they believe they literally talk to God; personal Bible reading is the means by which they read God’s word(s) and hears God’s personal message to them.

Corporate evangelicals insist that an authentic faith is active, but here too there is considerable latitude. Nearly all consider some form of personal evangelism (“sharing your faith”) an essential practice. But many others are involved in social activism. They favor immigration reform over walls on the border and many have followed the lead of insurance actuaries in acknowledging the reality of climate change. But their activism rarely extends beyond the personal. They are kind and generous, but cannot abide the idea that racism, or poverty, or gender discrimination have systemic causes or that their solution lies beyond the power of personal relationships and individual actions.

If this description of corporate evangelicalism resonates—if you say, “I know these people” or even “that’s me,” then I’ve done my job. But note the paucity of doctrinal content in what I have outlined above. There is no creedal definition that captures this group; they are found in a variety of theological contexts. This is how religion works. Belief is only actualized in experience; practice does not comport to neat categories nor limit itself to one side of a secular/sacred or public/private binary. All embodied beliefs, practices, and orientations—corporate evangelicalism included—are as much a product of economic, social, and cultural position as they are of a generative creed.

Corporate evangelicals have never constituted a majority of self-identifying evangelicals any more than the upper-middle-classes are a majority of the American population. But theirs is the identity to which many evangelicals aspire. They have always stood at the movement’s core, leading many of its key institutions, writing for its publications, and organizing its meetings and conferences.

So corporate evangelicalism the face of respectable evangelicalism. And these evangelicals are most affected by the present troubles. What happens to them, in many ways, will determine the future shape of the movement as a whole.

But before we can talk about that future, we first need to understand its past. And so next time, I will examine the historical roots of corporate evangelicalism in the mid-nineteenth century and how it has developed into its present form.

June 15, 2016
Surviving Rejection on the Academic Job Market
Next Post

June 17, 2016 More on Publishing and Presses
Recent Comments
4 Comments | Leave a Comment
"I suspect the decline in church attendance may be primarily due to the congregations having ..."
an old scribe Sheep, Community, and Accountability: Lessons from ..."
"https://archive.org/embed/s... … I think we all should properly deal with the books like this one ..."
mcepl The Myth of the Men-Stealers
"As long as they keep strictly to God/Jesus 66 books of scripture."
D.M.S. A Very Not-So-Merry Christmas: How Protestantism ..."
"Informative and interesting. Thank you. This raises questions about the term Protestant Reformation."
an old scribe How the English Reformation was Named: ..."
Browse Our Archives
Related posts from Anxious Bench 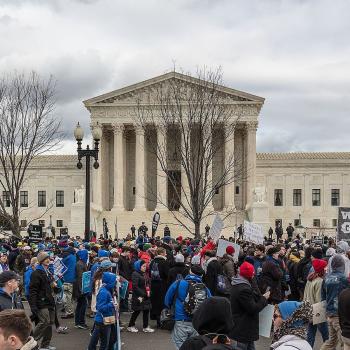