Two Sides of One Coin? Mapping Buddhist and Christian Decline

Although it’s a world religion, in a sense it is multiply cut off from its roots. While its key early figures used one language, its scriptures are translations of those early words. And although it was once very strong in the land of its birth, it subsequently became much more numerous in lands far afield, while it virtually died in that first homeland. Later believers might be surprised how much was transformed as the original faith moved from its oldest home.

I am referring of course to Buddhism. Or Christianity. Now, I am not the first person to draw comparisons between the historical experiences between the two faiths, nor even the thousandth. Here, though, I want to focus on a specific aspect of that comparison, namely the decline and near-extinction of the two religions in areas once critical to them. I believe that the experience of each religion sheds a good deal of light on the other. At the same time, it always pays to ask just how far we can take analogies between societies widely separated in time and space.

As this is a substantial story, I will discuss in a couple of posts. Here, I will just introduce the main themes, and lay out the problem.

Let me begin with the Christian side of the story.

I have written a good deal about the decline of the Christian church in the Middle East and Asia, especially in my 2008 book The Lost History of Christianity. Christianity, of course, began in Palestine but in its first millennium, it had some of its greatest spiritual and political centers in the Middle East, in Iraq and Syria. Between the fifth and eighth centuries, say, monasteries were as thick on the ground here as anywhere in the emerging Christian world, and Syriac was a key language of writing and scholarship. There were major intellectual centers and schools. Those Near Eastern communities supplied a springboard for missionary enterprises deep into Central Asia, and ultimately into China. The churches initially coped very well under Islamic rule, from the seventh century onwards.

Eventually, though, matters became much more difficult. At some point, large sections of the population moved to accept Islam, though exactly when that occurred is up to debate. Some say the process was well under way by the late tenth century, while I would stress the continuing strength of the churches well into the thirteenth century. What is not in doubt if that the century or so after 1260 marked a crisis, with the impact of climate-induced catastrophe, famines and plagues, and the Mongol invasions. These horrors inspired regimes to strike against their Christian populations, causing massacres and forced conversions. Although Christian communities survived until modern times, and many monasteries remained active, the religion had been dealt a decisive blow. This was now, definitively, the Islamic Middle East, and Christians were a small and unpopular minority.

With that background in mind, look at the Buddhist experience. Buddhism clearly began as an Indian religion, probably in the sixth or fifth century BC, and it long retained that essentially Indian character even after it had established footholds in China and Central Asia. Gautama Buddha himself was born on the borders of what is now Nepal. If you list the places associated with the Buddha’s life and early Buddhist history – Lumbini, Sarnath, Bodhgaya, Kushinagar – you are looking at a map of modern-day north-east Indian states like Bihar and Uttar Pradesh, the Plain of the Ganges, and Southern Nepal.

This geography is underlined in an article I read recently by Asoka Bandarage, “Visiting the Four Sacred Sites,” in Tricycle Summer 2016. Among other things, she notes that “The name Bihar is derived from the Pali word vihara, which refers to the Buddhist monasteries that once dotted the region.”

In the first two centuries AD, Buddhism experienced the immensely important movement called Mahayana, the “Great Vehicle,” with its emphasis on mighty spiritual beings called bodhisattvas. That movement was also deeply rooted in India, especially in southern regions like Andhra. In the second and third centuries, southern India produced deeply impressive Mahayana thinkers and philosophers like Nagarjuna and Aryadeva. From the fifth century, a celebrated Buddhist university operated at Nalanda, in what is now Bihar. 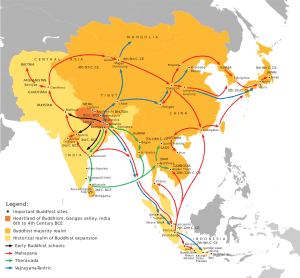 That was very much the same time as great Fathers of the Christian church like Origen, and there are many points of comparison between this Indian Mahayana explosion and the Christian Patristic Age, which was pretty exactly contemporary. Both flourished most spectacularly between around 100 and 450 AD. Nalanda finds its closest Western parallels with Syriac centers like Nisibis. (Now, there is a terrific comparative book waiting to be written).

In those centuries, Mahayana Buddhism not only produced rich spiritual insights, but also fostered enormous creativity in philosophy, metaphysics and psychology, and it left a spectacular legacy in the visual arts.

Greatly helping the spread of Buddhism was the Kushan Empire that was based in northwest India, Pakistan, Afghanistan and Bactria from the first century AD through the third. The Kushan Empire had close ties both with other empires in the Mediterranean world, and in China. Its great center was Gandhara in present day Pakistan, around Peshawar. This was the home of celebrated Mahayana thinkers like Asanga and Vasubandhu.

Later regimes were also sympathetic. Buddhists had a good relationship with the great Gupta empire that ruled India between about 320 and 550, although the Guptas also patronized traditional Hindu causes. Not well known in the West, the Gupta age was one of the greatest and most innovative in human history, comparable to the Athenian Golden Age. Buddhist prestige in India itself enjoyed a last efflorescence with the northern empire of Harsha in the early seventh century. He tolerated all religions, but particularly favored Buddhism, and built many shrines and stupas.

When the Chinese monk Faxian wandered through Buddhist India at its absolute height, around 400, his accounts suggest an amazing profusion of monasteries, shrines and stupas, with monks and nuns running into the countless thousands.

In terms of material remains, the greatest monument of this lost Buddhist India is the astonishing paintings, sculptures and inscriptions of the Ajanta Caves in the western state of Maharashtra. These range from around 150 BC though 500 or 600 AD.

Buddhism had a great period of missionary expansion, with Gandhara as one of its primary bases. Between the second and fourth centuries AD, Mahayana Buddhism established itself in China, Korea and Vietnam. Japan followed in the sixth century, Tibet in the seventh. Buddhist missionary monks came into contact with Christian monks pursuing the same goals in the same regions. Both exploited the widespread contacts made possible by the Silk Route. In Central Asian cities like Merv, Buddhists and Christians were near neighbors, whose relations were generally friendly. When Christianity arrived in China in the seventh century, the Chinese generally viewed it as a Buddhist sect. (Manicheans also formed part of the Central Asian religious scene, but that is another story).

Even as those new Buddhist “churches” boomed, though, they never forgot that India was the source of the faith. Chinese and other travelers like Faxian visited India in search of manuscripts and learning. One of those ventures, by the Chinese monk Xuanzang in the 630s, remains one of the great epics of religious history. It culminated in his return to China bearing several hundred scriptures, many of which still survive intact. Monks from Buddhism’s new territories – especially China – traveled to India to sit at the feet of Indian sages.

In the opening centuries of the Christian era, then, Buddhism was a great Indian religion. India had by far the greatest profusion of Buddhist religious centers and pilgrim shrines, and magnificent centers of education and scholarship. The key religious and philosophical work was done in Indian languages such as Sanskrit, which other countries translated as best they could, usually borrowing and adapting Indian concepts and phrases. Great scriptures and sutras were composed in Indian languages, but survive best, if at all, in Chinese. The vital Heart Sutra was composed in Sanskrit, probably in the third or fourth century AD, but is best known in Chinese. The Lotus Sutra probably originated in (Indian) Prakrit, before being translated into Chinese in the late third century. The Chinese translation of the Sanskrit Diamond Sutra dates from around 400.

Just by the way, a printed copy of the Chinese language Diamond Sutra was discovered at Dunhuang, on the Silk Route. Dating from 868, it is, by far, the world’s oldest printed book.

After Harsha’s patronage, though, that Indian Golden Age entered a period of decline from around 650, a trend noted by the surviving accounts of several Chinese travelers and pilgrims. I am open to correction here, but the last of the first-rank Indian Buddhist scholars was probably Shantideva, a monk of Nalanda in the eighth century. Buddhism lost ground especially to surging Hinduism, which attracted strong support from various empires and kingdoms. Indian Buddhism was already much weakened by the tenth century, when the country faced the onslaught of Muslim invaders. Invasions, wars and religious conflicts were causing massive destruction by the thirteenth century, a process neatly described by the Wikipedia entry on The Decline of Buddhism in India, which is well worth reading.

Indian Buddhism survived in scattered regions, but the glory days of the early Mahayana centuries were long past. Later pilgrims still noted ancient schools and universities, in India but lamented their ruined state, much as Christians commented on equivalent institutions of their own faith in the Middle East. Buddhism’s position in India was actually far worse than that of Christianity in Iraq. Some writers argue that as a religious system, Indian Buddhism had simply ceased to function by 1250. As I noted briefly in my Lost History of Christianity, this Indian story is one of the classic examples of a vastly under-studied phenomenon, namely the death of a religion.

In matters of chronology alone, the Buddhist-Christian parallels are intriguing, with the sharpest declines occurring between (say) the tenth and thirteenth centuries.

Next time, I will describe some of the reasons that have been advanced for these parallel crises. What happened to Indian Buddhism? 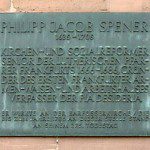 June 28, 2016 What It Means to Say "I'm a Pietist" in 2016
Recent Comments
4 Comments | Leave a Comment
"No-one can confidently answer your last question, but one thing I know, that those who ..."
Kostya2 The Resurrection of Johnny Rotten
"A church that tacitly supports lynching because "it's inevitable" is absolutely countenancing it.You say the ..."
swbarnes2 What We Can Learn from Pastors ..."
"This is a well-reasoned article seemingly backed up by valid data. Thank you."
Maine_Skeptic Refugees and the Enduring Cruelty of ..."
"The commentary on the Bible of Kralice (from 1579; https://en.wikipedia.org/wi... says this (my own translation ..."
mcepl I Gave Them Laws Through Which ..."
Browse Our Archives
get the latest updates from
Anxious Bench
and the Patheos
Evangelical
Channel
POPULAR AT PATHEOS Evangelical
1