This coming Monday, August 1, marks the medieval feast of Lammas, Loaf-mass, the year’s first harvest festival, and that coincides with one of the great feasts of the ancient Irish calendar, Lughnasa. This also brings me to a curious anniversary, which tells us a little bit about medieval history, and a great deal about the making of modern day mythologies. I’ll be writing several columns on this general topic, which overlaps nicely with Beth Barr’s recent posts at this very blog about myths concerningpaganism and witchcraft.

On August 2, 1100, the English king William Rufus was killed by an arrow while hunting in the New Forest, probably in an assassination, possibly by a genuine accident. We really don’t know. In modern times, though, that story developed an unexpected afterlife through the work of a bizarre scholar called Margaret A.  Murray (1863-1963). Murray was a distinguished Egyptologist, who developed a grand unified theory of European witchcraft. She argued that the records of witch-trials were not simply fictitious, but actually contained accounts of genuine underground pagan cults that flourished within a notionally Christian Europe.

This theory was not wholly new to her, and she had plenty of predecessors over the previous decades, including feminists like Matilda Joslyn Gage. However, Murray brought the idea to a mass audience. That theory was expressed in Murray’s enormously influential 1921 book The Witch-Cult in Western Europe, and in The God of the Witches (1931). These books inspired countless horror novels, and Murray’s writings are even cited in H. P. Lovecraft’s Call of Cthulhu. They also largely inspired the actual creation of the Wicca movement, the supposedly revived witchcraft created by Gerald Gardner in the 1950s. Notionally, that too was a revival of an ancient pagan cult.

Modern scholarship has thoroughly demolished Murray’s claims, but she got battier and more aggressive as she got older. Seeing crypto-pagans everywhere, she developed a still more grotesque theory that drew on Sir James Frazer’s Golden Bough. The last chapter of God of the Witches presented a theory of continuing human sacrifice in English history, a theme that she developed even further in The Divine King in England (1954). In ancient times, she believed, pagan kings were regularly sacrificed for the good of the land and the flourishing of the crops. That custom, she believed, survived among the nobility into notionally Christian times, and some historical royal deaths were actually thinly described human sacrifices.

Among these, she prominently included William Rufus’s death in 1100,  This death, she noted, occurred the day after Lammas, that ancient pagan celebration. Further, she claimed, this day was was once known as the Gules of August, which she took to mean a “Red” day: so why else was William called Rufus, red? It all fitted together. He was a sacred king, the Divine Victim, and a voluntary sacrifice, on this red day of blood. (Gules does not in fact mean Red in this context, but let that pass). The king’s favorite oath was “By the Face of Lucca,” referring to a popular relic. For Murray, though, this actually meant the holy face of a pagan god, perhaps the Norse Loki, or the Celtic Lugh.

However weird that all sounds, that thesis was presented in other works, and made some impact in popular culture. Back in 1968, I remember a stunning and very spooky BBC radio play that presented this view of Rufus’s death, Lydia Ragosin’s Dark Majesty. Does a copy survive anywhere?

Murray included other deaths in her mythology. One of the odder was St. Thomas Becket, who was murdered in Canterbury Cathedral in 1170, a couple of days after the Winter Solstice. That dating, by the way, indicates one of the key problems with her whole work. It would be wonderful if her kings and prelates had died precisely and punctually on special sacrificial dates, but they never did. They died a day or two before or after: these were extremely moveable feasts. Even William Rufus inconveniently died on August 2, not 1. In her later writings, she noted that X’s death was suspicious because it occurred in one of the so-called “sacrifice months” – so statistically, pretty much half of all deaths of any kind fell into her grand scheme just by virtue of date.

Oh yes, and Joan of Arc was also a pagan human sacrifice, the work of the witch-cult.

As I say, nobody takes Murray’s work seriously now, and her divine king thesis was thought really embarrassing at the time. As early as 1956, Angus Wilson’s novel Anglo-Saxon Attitudes contains a riotous sketch of a thinly disguised Murray, depicting her as sliding into paranoid insanity. (Wilson had met her through his work at the British Museum, and they must have had some astonishing conversations).

But her writings were influential in their way. In Britain, the decade after 1968 or so marked an explosion of what is now labeled Folk Horror, films and novels that assumed something like the Murray mythological scheme. The term Folk Horror is quite recent, and was apparently coined by Mark Gatiss in a television documentary in 2010. The phenomenon itself, though, is much older and is a major cultural fact. These films (and books, and television plays, and songs, and rock albums) emphasized themes of landscape, superstition, folk customs and deep heritage, all of which concealed a lethal pagan past. There really were pagan cults lurking in every quaint village, witches really were out to sacrifice you. The greatest monument to this was probably the 1973 film The Wicker Man, which shows up on many lists these days as one of the three or four greatest British films ever made.

Ultimately, this all had real world consequences, as the Folk Horror fictions of the 1970s became the essential foundation for the Satanic and Ritual Abuse panics of the 1980s and beyond.

I just add a side note. William Rufus died in the New Forest, in Hampshire, and that New Forest connection plays a role in the later history of occultism. From 1938, a resident of the same region was one Gerald Gardner, the retired civil servant who created modern Wicca, and who moved to Highcliffe, just over the Dorset border. He claimed to have been initiated into an older witches’ coven in the area, a group whose actual existence is hotly debated. Gardner himself claimed it was an authentic survival of the ancient witch cult as imagined by Murray. Almost certainly, what had actually happened was that a group of educated local occultists had read Murray, and formed their New Forest coven based on her literary inspiration. This was a classic example of nature imitating art.

One great book on these matters is Ronald Hutton’s The Triumph of the Moon (1999).

It all makes me think of the wonderful definition offered by Ambrose Bierce in his Devil’s Dictionary:

MYTHOLOGY, n. The body of a primitive people’s beliefs concerning its origin, early history, heroes, deities and so forth, as distinguished from the true accounts which it invents later.

More on all this next time, and specifically on the deep literary roots of The Wicker Man.

And a happy Lammas-tide to you all. I don’t think my Hallmark store has the appropriate cards.

I see that The Wicker Man continues to inspire! See now the amazing video for Radiohead’s Burn the Witch. 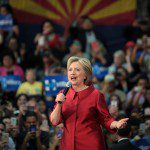 July 28, 2016
Donald Trump and Hillary Clinton, By Their Words
Next Post

July 31, 2016 No Room in Wayne Grudem's World for a Female President
Recent Comments
8 Comments | Leave a Comment
"Impressive article. Provides the necessary perspective for entering into an informed discussion about the science/religion ..."
the old scribe Science, Religion, and Nineteenth Century Protestantism
"Very helpful! Thanks! It seems history has always been used as a weapon."
Roger McKinney Science, Religion, and Nineteenth Century Protestantism
"You have done nothing to refute my point. Certainly we should do the affirmative things ..."
NorrinRadd Ron Sider and the Fate of ..."
"When we try to prohibit behavior that many people consider, we simply drive the behavior ..."
Silverwolf13 Ron Sider and the Fate of ..."
Browse Our Archives
Related posts from Anxious Bench