After centuries of relying on sky-high Amish birthrates for church growth, Anabaptism has exploded in just several months. The surprising converts include a lot of conservative white evangelicals who are not known for their pacifism, simple living, or belief in the separation of church and state. Nonetheless, many are suddenly preaching the limits of partisan politics.

There are many reasons why white evangelicals find this crop of candidates so unappealing. Those who identity with the Republican Party cite Clinton’s pro-choice stance and her dishonesty on the email scandal. Critics of Trump cite his serial philandering, his xenophobia, his sexist language, his hyper superpatriotism, and his general lack of discipline. Tommy Kidd has asked, “Are evangelicals just errand boys for the Republican Party?” With Trump at the helm, perhaps less so.

Not having a good candidate is not new for most Anabaptists, who found themselves the target of every civic authority in the sixteenth century. Even today, certain sensibilities place Anabaptists outside conventional political discourse and behavior.

First, American political discourse tends to conflate the purposes of the nation with those of Christian faith. Republicans and Democrats alike entice Christians to follow a common script of nationalism. Each nurtures a strong attachment to the nation and willingness to use a strong state to press its Christian agenda: the populist Right in support of the military, sexual morality, and consumerism—and the populist Left in support of social justice, tolerance, and, again, consumerism. Each side trumpets a script of American exceptionalism. If you think the Republicans are more egregious offenders, check out this year’s Democratic National Convention.

Nationalism can be a powerful and useful script because national loyalty sometimes binds very diverse peoples together. But the vocabulary of nationalism we hear in the Republican and Democratic parties—and then echoed in Christian groups—typically shades toward idolatry. New York Times columnist Ross Douthat says that the temptation for Christian liberals is to say that the purpose of politics is to straightforwardly bring the kingdom of God to Earth. For conservatives the temptation is messianic and apocalyptic. It’s the temptation to say Americans did have a covenant with God, a literal covenant beginning with the Founding, and that we are, like Israel in the Old Testament, falling away from it and will be punished. In the end, each side essentially practices different versions of an idolatrous civil religion.

Second, both sides practice realpolitik to accomplish their goals. Anything goes in the attempt to win. Parties enforce platforms, leaving little room for dissent, and they coerce adherents into following culture war scripts. They encourage the demonization of the enemy. In his recent book, To Change the World, James Davison Hunter writes, “The politicization of everything is an indirect measure of . . . the competition among factions to dominate others on their own terms. Our times amply demonstrate that it is far easier to force one’s will on others through legal and political means or to threaten to do so than it is to persuade them or negotiate compromise with them.” Donald Trump, who called his opponent “the devil,” applies cutting language to persons in poor, LGBTQ, and immigrant communities.

Liberals are also guilty. Jonathan Haidt, a social psychologist, found in a survey of 2,000 Americans that self-described liberals, especially those who called themselves “very liberal,” were worse at predicting the moral judgments of moderates and conservatives than moderates and conservatives were at predicting the moral judgments of liberals. “Liberals don’t understand conservative values—and they don’t even try,” says Haidt. In short, the requirements of political pragmatism don’t align well with the fruits of the Spirit. How much love, joy, peace, kindness, goodness, faithfulness, gentleness, and self-control are you witnessing among politicians—or even Christians—in this election?

Third, both sides also support an unbridled consumerism. In his book The Unintended Reformation, Notre Dame historian Brad Gregory takes stock of the Reformation’s legacy. He concludes that it sparked Western social incoherence and secularization. What now binds the West together is money. Everyone agrees to produce and purchase as many goods as possible. Gregory writes, “We have substituted a life defined by the good with a life defined by goods.” The consumptive patterns normative in American conceptions of retirement, eating habits, leisure, and the use of time are legitimated by Christians who uncritically accept existing political and economic structures.

Finally, and there are variations here, but Anabaptists generally follow a consistent-life ethic that opposes Christian participation in war, abortion, and the death penalty. But practicing a consistent pro-life stance is nearly impossible in today’s two-party system and political climate. Perhaps it is more possible to participate electorally while not trumpeting nationalism, culture war scripts, and neo-liberal consumption. But there are very few examples of this.

For many Anabaptists, political realities have pushed them toward a two-kingdom theology that distinguishes the purposes of the state with the purposes of God’s kingdom. It questions a too-close alignment of the church with electoral politics. As Greg Boyd notes, acquiring political power is the very temptation Jesus resisted when tempted by the devil. It would have been easy for Jesus to accept Satan’s offer to reign over all the governments of the world (Luke 4:5-7), but he declined the offer. This is not to reject citizenship entirely. Anabaptists, always searching for third ways, insist on more creative approaches. After all, there are other ways of being political besides voting: practicing citizenship on a local level, adopting a more global than national identity, allying with social movements like #blacklivesmatter.

To be sure, many white evangelicals do not agree with Anabaptist critiques of anti-life planks, consumerism, and nationalism. But they are now confronted with two candidates that offend their sensibilities in multiple and egregious ways—and who make the two-kingdom sensibility more compelling. Moreover, political impotence has become a fait accompli; whether or not white evangelicals should exercise electoral force, they increasingly aren’t an electoral force. They have lost the battle on abortion and same-sex marriage (these issues weren’t even mentioned in the debate last night). Despite overwhelming initial objections to Trump, Trump got the Republican nomination anyway. It’s easy to talk in the language of two kingdoms when there aren’t any candidates who pretend to represent your concerns. 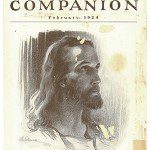 September 29, 2016 God and the 2016 Presidential Debates
Recent Comments
5 Comments | Leave a Comment
"Thank you for the insights. As you pointed out, technology has been a two edged ..."
the old scribe Is Religion Naturally Averse to Technology?
"I suppose the question is whether or not the Holy Spirit could use technology to ..."
Nimblewill Is Religion Naturally Averse to Technology?
"What a great post, Allie! Insightful and eloquent."
Ansley Every Day People in Every Day ..."
"Impressive article. Provides the necessary perspective for entering into an informed discussion about the science/religion ..."
the old scribe Science, Religion, and Nineteenth Century Protestantism
Browse Our Archives
Related posts from Anxious Bench