Because Xmas really is Xpian…

This is from my Anxious Bench archives. I originally posted it December 2, 2015. But it seems still relevant and useful, so enjoy it for Xmas 2016 too. 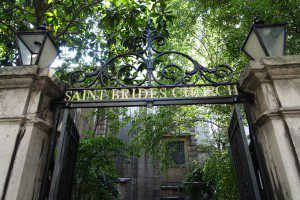 I literally stumbled across St. Bride’s church in London this summer. Walking down Fleet Street toward St. Paul’s Cathedral, I was considering eating at Ye Olde Chesire Cheese when I looked up and saw the wedding cake spire designed by Christopher Wren. It wasn’t until I saw the sign “The Printer’s Church” on the gate, almost hidden from the main road, that I remembered one of the reasons why St. Bride’s is important:   it is where Wynkyn de Worde set up England’s first commercial printing press with moveable type at the very end of the fifteenth century.

Of course I went inside. After exploring the Roman pavement and medieval crypt, I stopped to look at the display of early English printed books. I was very interested in the 1560 copy of the Geneva Bible, which contains the famous rendering of Genesis 3:7 that Adam and Eve made themselves “breeches” (hence the nickname the Breeches Bible). While reading the glosses, I recognized the medieval abbreviation for ‘the’ (which is the now obsolete letter thorn “þ” with or without a superscript “e”) appearing as ye in the early modern print.  A fun fact for those of you new to manuscript studies, the “ye” as in Ye Olde Chesire Cheese or Ye Olde Bookshop is actually a hangover of the medieval “þe”–which means that, as fun as it is to say ye with a “y”, a better pronunciation is the more boring “the”. I have linked a research blog from the Folger Shakespeare Library for those interested in more early modern print oddities.

As a medieval historian, I am accustomed to these hang-over words and abbreviations. They proliferate in the fourteenth- and fifteenth-century manuscripts I use in my research. Because vellum (animal parchment) and the human labor needed for transcription were costly in the medieval 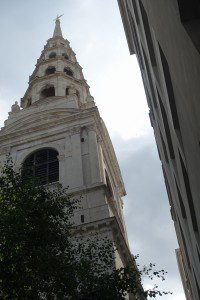 Yet, for modern readers unaccustomed to medieval manuscripts, these seemingly archaic abbreviations often appear inexplicable. A good example is one that gets headlines this time of year: “X” as a substitute for “Christ”.

“X” is the Greek letter for “Chi.”  We all know this. We also all know that “X” was often used by early Christians as a sign for “Christ” and even “Christian.” What we tend to forget, however, is that the reason “X” continues as a viable abbreviation in our modern world is because medieval scribes and early modern printers preserved it for us.

Indeed, in the medieval and early modern world, “X” stood confidently for “Christ”. The Oxford English Dictionary records the 1021 use of “X” in the Anglo Saxon Chronicle to note Christmas: “On Xpes maesse”.  The late fourteenth-century English Wycliffite Sermons differentiates that “I” is used as substitute for Jesus while “X betokeneth Crist.” From the late fifteenth-century parliamentary rolls denoting kings as “Xpen” to the seventeenth-century accounting records tracking finances from “Xmas[se] 1684 to Xmas[se] 1685,” X was such a familiar substitute for Christ that a sixteenth-century author (as the OED tells) recorded a more unorthodox use for it: “The long mistaking of this woorde Xp̃s, standing for Chrs by abbreuation which for lacke of knowledge in the greeke they tooke for x, p, and s, and so like~wise Xp̃ofer [Christopher].”

One final example accentuates premodern attitudes. A tract on “Brief Directions for True-spelling” by Henry Preston was printed in London in 1673. It was a tract explaining useful and common abbreviations. In a paragraph “concerning contractions, or writing one or more letters for words,” it explains that “Xpian” is the accepted abbreviation for Christian. Again, in an alphabetic list of abbreviations, it lists Xpian or Xten as meaning Christian. “X” was not only a normative spelling for Christ in the early modern world, just as it had been in the medieval, but it was also one of the most common abbreviations used.

With such continuous use throughout the medieval and early modern world, “Xmas” (along with “Xtian,” “Xian,” and even “Xpian”) simply can’t be read as a modern symbol of secularization. So as you celebrate the season of Christ’s birth, don’t be afraid to wish your friends and family–or even your Starbucks barista–“Merry Xmas!” I promise, from a historical standpoint, it really has always been Christian.

December 19, 2016 The Most Influential Theologian You've Never Heard of
Recent Comments
0 | Leave a Comment
Browse Our Archives
get the latest from
Anxious Bench
Sign up for our newsletter
POPULAR AT PATHEOS Evangelical
1