I have long valued Rick Perlstein as an excellent scholar of recent American history, chiefly working on the 1960s and 1970s. Based on his recent writings, I also see that he must be a superlative teacher. Please bear those comments in mind when I express some disagreement with him on the theme of counter-factual history, and how history might have developed in ways other than it did. This particularly applies to matters of race and slavery.

Perlstein has a fine piece in the current issue of Mother Jones under the title “Peter’s Choice” (it’s not available on line as yet). Briefly, he describes teaching a class where he encounters a very bright student, “Peter,” who supports Donald Trump, a position far removed from Perlstein’s progressive views. Far from attempting to browbeat or mock Peter, Perlstein encourages him to express and develop his views, and a very rewarding class discussion follows. Hmm, honest disagreements over potentially explosive issues, expressed freely in public debate. What a concept!

Yes, there are still professors who do such things, and they should be encouraged mightily.

The whole article repays reading, but I will focus here on one point of contention between Perlstein and Peter. They disagreed forcefully over the merits of Reconstruction, and specifically on Peter’s view that “slavery was expensive and the Industrial Revolution was about to happen. Maybe if there had been no war, slavery would have faded peacefully.” As Perlstein remarks, such views were once popular, but more recent scholarship had demolished them. It is these historical and racial opinions that genuinely shock Perlstein. As he concludes, “This was where he left me plumb at a loss. Liberals must listen to and understand Trump supporters. But what you end up understanding from even the sweetest among them still might chill you to the bone.”

Let me argue with Perlstein on one specific here, without putting too many words in his mouth. As I understand him, he absolutely rejects Peter’s opinion about the fate of slavery. I presume this is because like many current historians, he believes that slavery was profitable and pervasive in Southern society, and it wasn’t going away of its own accord. The only way to finish it off was by force, and ultimately, that meant bringing on the Civil War, which killed some 750,000 Americans. (That number is incidentally a significant upward revision of older estimates).

To put that number in context, the USA in those four years lost about twice as many dead as have perished in the recent (post-2011) Syrian conflict. Given the relative population of the two societies then and now, the death rate was comparable, although most of the American dead were military rather than civilian.

In my view, an excellent case can be made that that war was unnecessary, not of course because slavery was in any way defensible – no sane person thinks that – but because the slavery institution would indeed have ended without military intervention. And ended quite soon. Yes, slavery was profitable, but profit depends on markets, and on trade, and the whole Southern economy was intimately bound up with larger global networks, which chiefly meant the British Empire. The British were the critical market for Southern cotton, and they were key investors.

Assume for the sake of argument that Southern secession was achieved bloodlessly, so that the Confederacy obtained independence in 1861. The new country would have been effectively a dependency of Britain, although not a formal possession. There were plenty of analogies for such an arrangement at this time. In several notionally independent states, mainly in the Americas, the British absolutely controlled the economies of resource-rich countries, but never bothered to annex them formally to avoid provoking a war with the US over the Monroe Doctrine. That economic hegemony also involved substantial political and cultural dominance. Argentina and Uruguay were well known parts of this “informal empire,” which lasted into the 1930s.

But if the Confederacy held such a role, there is no conceivable way that the British could long have tolerated an alliance with slave societies. Anti-slavery sentiment was extremely strong in Britain, especially among the radical and Nonconformist groups who were at the heart of the Liberal Party, and whose influence was growing steadily in the 1860s. That radicalism surged with every new evangelical revival. Perhaps not in 1861, but within a decade or two, the British government would have had no choice but to put overwhelming pressure on the Confederacy to end the slave system altogether. Presumably, that would have meant some kind of phased abolition accompanied by compensation for owners, quite unlike the dramatic emancipation that followed Union victories in the real world.

If the British had withdrawn their support, political and economic considerations alike mean that no other European nation could possibly have stepped into its role. The French had finally abolished slavery in their possessions in 1848, and any alliance with slavery would have poisoned the country’s claims to lead the world of liberal modernity. The only other major economic power that might conceivably have  taken Southern cotton would have been the rump of the United States, centered on New England, and in no mood whatever to accept slave-grown goods.

No markets, no trade, no investment – and no cotton industry. Given the state of international opinion, slavery in the Confederacy would simply have become unsustainable, just as it eventually did in Brazil by the 1880s.

If American slavery had somehow outlived Lincoln, it could not have survived Gladstone.

To summarize: Even if the US had not had its civil war, then slavery would still have ended, albeit a decade or two later than it actually did. Avoiding that war would have prevented the immense loss of life and destruction of communities. It might also have avoided the appalling grievances and hatred that so poisoned race relations in the South in the century after 1865.

So was the Civil War really a necessary catastrophe? I think I am with “Peter” on this one.

I am therefore suggesting a counterfactual, which many historians reject as a way of arguing. Certainly, I can neither prove nor test my view. But equally, is not the current mainstream opinion about the Civil War and slavery just as completely based on counterfactual, alternative history? What those other historians are saying is that, if the civil war had not occurred, then slavery would not have ended. Those historians, like myself, are making what they consider to be logical deductions based on the historical context as they understand it. Counterfactual meets counterfactual.

Obviously, I think my approach is superior because mine, unlike theirs, takes account of the larger international setting. But whatever you may think of that view, I think the counterfactual is a valuable – and maybe essential – means of approaching historical events.

If I am misrepresenting Perlstein’s views in any way, I do apologize and will make any corrections needed. 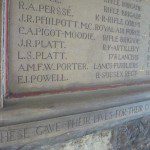 January 10, 2017 Lewis, Tolkien, and the Shadow of War
Recent Comments
4 Comments | Leave a Comment
"Impressive article. Provides the necessary perspective for entering into an informed discussion about the science/religion ..."
the old scribe Science, Religion, and Nineteenth Century Protestantism
"Very helpful! Thanks! It seems history has always been used as a weapon."
Roger McKinney Science, Religion, and Nineteenth Century Protestantism
"You have done nothing to refute my point. Certainly we should do the affirmative things ..."
NorrinRadd Ron Sider and the Fate of ..."
"When we try to prohibit behavior that many people consider, we simply drive the behavior ..."
Silverwolf13 Ron Sider and the Fate of ..."
Browse Our Archives
Related posts from Anxious Bench