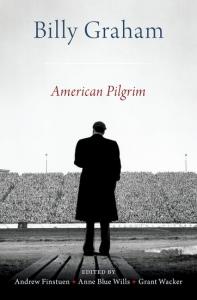 “From 1950 until the 1990s,” writes Andrew Finstuen in his contribution to Billy Graham: American Pilgrim, “Billy Graham visited colleges and universities as often as he could.” Indeed, Graham would take his evangelistic message and his charm offensive anywhere.

Graham was not always welcome on campus. Professors, especially seminary professors, often loathed Graham and criticized him as a simpleton. Graham’s celebrity guaranteed full rooms, but students wanted to trip him up. By his own admission, moreover, Graham was no intellectual. Early in his ministry, he had rejected the idea of rigorous theological training, and he had no stomach for scholarly criticism of the Bible. Graham was undeterred.

Not all students warmed to Graham. “If I have to choose between Evangelist Graham’s fundamentalism and Satan,” wrote one UCLA student in 1951, “I’ll take the latter.” [The Daily Bruin, Oct. 8, 1951.” Perhaps the student would have liked the post-fundamentalist Graham more. In the wake of Graham’s misguided alliance with Richard Nixon, the evangelist often received cool responses on college campuses in the mid-to-late 1970s. Graham kept coming, though. As Finstuen observes, “It took courage to risk looking the fool in front of academic audiences, honesty to cultivate mutual understanding with them, and humility to return to them for more. Graham’s perseverance, wit, and rhetorical skill won over many antagonistic students and professors. His ability to talk out of different sides of his mouth depending on the venue also seemed to help.

I have no idea how many students dedicated or rededicated their lives to Jesus Christ based on an on-campus encounter with Graham, or how many students Graham at least nudged down that path. I am sure that the numbers would be substantial. The constant encounters with students, moreover, undoubtedly helped Graham retain his cultural relevance and evangelistic edge for decades.

Here is Graham in 1967 speaking at Campus Crusade for Christ’s “Berkeley Blitz” (Graham appears twice in the first five minutes):

“Will there be another Billy Graham?” Wacker asks in his introduction to the above-mentioned volume of essays about Graham. “Probably not,” he reasonably concludes. Could another American Christian engage students on campuses the way Billy Graham did? Probably not, I would hazard. Certainly, there are many Christians who do go to colleges and universities. Tim Keller and Rod Dreher come immediately to mind, and I know there are many faithful effective campus evangelists.

But I do not think  any American Christian today could regularly attract thousands of students to “lectures” the way that Billy Graham did. Perhaps Joel Osteen could draw biggish crowds on campus if he chose to do so, he doesn’t enjoy the give-and-take with critics the way that Graham did. Rick Warren might have been able to draw substantial crowds ten or fifteen years ago, but not today.

Also, a speaker akin to Graham would not be welcome on some campuses. It would be harder for someone with Graham’s social and political views to gain a semi-respectful hearing. I’m not sure I would want to send him or her to my alma mater (Middlebury College) or to Berkeley today.

Nevertheless, despite the reputation of the modern American university as hostile to conservative speech and to evangelicalism in particular (witness the difficulty of InterVarsity and other ministries maintaining access to some campuses), American campuses still provide the space for an unusual amount of dialogue and free speech. At my own George Mason University’s public spaces, we get incredibly rude preachers who openly denounce homosexuality and badger passing students about their fashion choices. If we have to have those folks, it would be nice to have a Graham-like figure as a more positive expression of Christianity on campus. 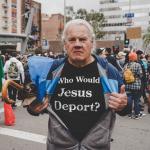 September 13, 2017
Empty Pews? Invite Some Immigrants to America!
Next Post

September 15, 2017 Churches, Mosques and Temples: Who Came First?
Recent Comments
0 | Leave a Comment
"Wasnt Pauls point in Romans 14 about eating meet or not that both sides should ..."
Roger McKinney The Cost of Staying Silent
"I went to Dordt, not Calvin, but yes--that was the only book on gender I ..."
K Du Mez The Cost of Staying Silent
"I'm looking forward to reading this book! I appreciate that you mention that first order/second ..."
Heidi It’s A Small, Small (Complementarian) World
"Best wishes to you and Dr. Barr. The cost of speaking up about this topic ..."
jtshaw The Cost of Staying Silent
Browse Our Archives
get the latest from
Anxious Bench
Sign up for our newsletter
POPULAR AT PATHEOS Evangelical
1