As a current project, I am working on organizing a conference on “The Idea of Tradition in the Late Modern World: An Ecumenical and Interreligious Conversation,” which will take place in the spring semester on the campus of Valparaiso University. Below, sketched, is the conference idea and preliminary information. I hope this will be of interest to Anxious Bench readers; and please notify others who might be interested.

We live in an “era of accelerations,” according to the New York Times columnist Thomas Friedman—an age in which technology, cultural norms, the workplace, social institutions, family structures and much more are changing with increasing rapidity. Similarly, the sociologist Zygmunt Bauman has described our cultural moment as “liquid modernity”—his shorthand for the disorienting cultural flux and fluidity that many feel in the face of forces such as globalization, urbanization, immigration, and technological change. If these analyses are true, or even partly true, the question presents itself to communities of faith: how can a religious tradition be faithfully observed and transmitted to succeeding generations in such a cultural climate? At a broader level, what exactly is “tradition” and how might it contribute to (or detract from) human flourishing in our present-day pluralistic milieu? Finally, what role do/should academic institutions play in passing down a tradition while keeping it engaged in present-day realities?

These questions will serve as starting points for a conference in the spring semester of 2018 that will bring representatives from the three major Christians traditions (Protestant, Catholic, and Orthodox) to the campus of Valparaiso University. The speakers will be joined by two additional “Abrahamic” voices, one Jewish and one Muslim. Hence, the gathering aims to be at once ecumenical and interreligious, with all present seeking, in the words of Chaucer, “to gladly learn and gladly teach.”

The conference intentionally coincides with the celebration of the 50th anniversary of Christ College, Valparaiso’s interdisciplinary, humanities-based honors college—an event in the life of the College that acutely raises questions about “tradition.”

The Conference will take place on April 20, 2018 on the campus of Valparaiso University. For more information, contact traditionconference@valpo.edu 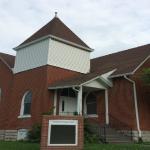 September 12, 2017 4 Steps to the Renewal of Evangelicalism
Recent Comments
0 | Leave a Comment
"Lest people make too much of the "Medieval Warm Period" relative to the global climate, ..."
AHH How a Warm Climate Made the ..."
"Excellent! This is actual meaning of being a Christ follower, in that it resounds the ..."
Douglas McCall American Religion Beyond the Synagogue, Church, ..."
"I don't know of a serious complementarian that thinks their interpretation is canonical and without ..."
Jonathan H Deconstructing the ESV: A Historian’s Response ..."
"No, no they don't. That is to overinterpret their actions. I would read up on ..."
Jonathan H Deconstructing the ESV: A Historian’s Response ..."
Browse Our Archives
get the latest updates from
Anxious Bench
and the Patheos
Evangelical
Channel
POPULAR AT PATHEOS Evangelical
1