In my teenage years, I operated on the assumption that real life was a crutch for those without the nerve to face science fiction.

Some of those science fiction books and stories remain with me as very powerful influences and memories, and fifty years on, I am still not fully recovered from seeing Kubrick’s towering film of 2001. The cutting-edge British magazine New Worlds was for several years in the late 1960s my literary Bible, and it served as a gateway drug to all sorts of experimental fiction. I have written about some of the major writers that linger with me, especially Philip K. Dick, J. G. Ballard, and John Brunner. But as we hit 2018, I think of one spectacularly important series of books that is not as well recalled or venerated as it should be. I will explain the 2018 connection.

James Blish was one of the greatest SF authors of the 1950s and 1960s, and among other things, he was one of the rare writers of that genre who plunged headlong into explicitly religious themes. A Case of Conscience (1958) daringly describes the human contact with an alien race that knows nothing of God or religion, yet which has an impeccable sense of morality. As the lead human character, a Jesuit, agonizes: are they truly unfallen? How can ethics and morality exist without God? What are the implications for the church, for Catholicism? Had Satan created these aliens to test and ultimately ruin the faith of Christians? (There is a good theological analysis here). And that was just the first volume in an ornate theological series, After Such Knowledge, a phrase borrowed from T. S. Eliot.

Blish was also heavily involved in Star Trek, and wrote many novelizations. He died, indecently young, in 1975.

But my focus here is the four volumes of his Cities in Flight series, which appeared in book form between 1956 and 1962: They Shall Have Stars, A Life for the Stars, Earthman Come Home, and The Triumph of Time, (aka A Clash of Cymbals). It is an understatement to describe these as epic in scale, and they are amazingly prolific in invention. Among other elements, Earth’s residents flee a tyrannical and failing world, and they do so as the cities flee into space, becoming the Okies of a new interstellar mass migration.

The final volume describes the end of all things, as multiple universes collide into a new Big Bang, in which Earth people and aliens compete to shape the future cosmos. (Large scale and ambitious, you say? Eat your hearts out, Star Wars fans). Suggesting his religious orientation, the end of the universe is scheduled for 4004 AD, a sly recollection of Archbishop Ussher’s famous postulated date for the creation, of 4004 BC. However mystical and metaphysical it may all sound, every word is based on a hard-SF vision.

The epitaph Blish provides for the human race is “We did not have the time to learn everything that we wanted to know.”

These books had a vast impact on me, and I cherish the autographed copy of They Shall Have Stars that Blish signed for me in 1970. That was actually the second copy of the book I owned, and the first bore the British title, which was – Year 2018! (The exclamation was part of the title). For me, for that reason, 2018 always symbolized the far future.

Rather like A Case of Conscience, Cities in Flight was in no sense an attempted prediction of a future, but rather supplied a vehicle for the Idea as Hero. Blish’s 2018 is set in a highly repressive US in the throes of a neo-McCarthyism orchestrated by the FBI. Meanwhile, humans have penetrated far into the solar system, and the great venture of the time is a mysterious mining venture on Jupiter, under the appearance of building a bridge. These ventures are made possible by the invention of usable anti-gravity devices (the spindizzy), and anti-aging solutions that allow humans to survive the immensely long time spans of space travel.

So  I now find myself living in that far distant year of 2018, which was then unquestionably part of science fiction, rather than any conceivable reality that we might live to see. And now here we are, in the far future.

But as has been wisely said, we will not truly have arrived in that distant science fiction future until our skies are crisscrossed by flying robot assassins venturing far afield to fight our wars.

January 11, 2018
How to Solve Christian Scholarship's Distribution Problem
Next Post 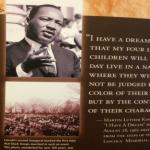 January 15, 2018 Martin Luther King, Jr. and the Great Cloud of Witnesses
Recent Comments
0 | Leave a Comment
"Intriguing. I didn't know that Walter Rauschenbusch was a prohibitionist! Odd, since his book,Christianity and ..."
Daniel Wilcox “Everything You Know about Prohibition Is ..."
"My mother was a Baptist preacher's daughter, born in 1935. She used to "play church," ..."
Jon Altman What I Learned from Designing Women ..."
""Bernice reminds Reverend Nunn that for every time Paul seems to silence women, Paul elsewhere ..."
Rick What I Learned from Designing Women ..."
"We (the Lutheran World Federation) condemn Luther's antisemitism and have asked forgiveness from the world's ..."
Harvey James Johnson What Is a Heretic?
Browse Our Archives
get the latest updates from
Anxious Bench
and the Patheos
Evangelical
Channel
POPULAR AT PATHEOS Evangelical
1