I have been posting about the book The Adventures of Simplicius Simplicissimus, published in 1668 by Johann von Grimmelshausen. Grimmelshausen describes the atrocious conditions prevailing across Central Europe during the Thirty Years War (1618-48), which was notionally a death struggle between Protestant and Catholic states and their armed forces. But what did that religious quality mean in action? What kind of holy war was this? Simplicius Simplicissimus  paints a truly grim picture of that and other “wars of faith.” It also raises some questions about how those old patterns evolve into modern patterns of warfare.

Throughout the novel, we are appalled by the extraordinary savagery that soldiers on all sides visit on each other, but above all on civilians. Looting, robbery and rape proceed without the slightest question. So what did the soldiers of the time actually think they were fighting for, or fighting about? One characteristic passage speaks volumes. A raiding party led by Simplicissimus meets another group of soldiers, and the natural question is, what side are you on? Remember, there are no formal uniforms or standard issue helmets.

We might read that as saying that both soldiers stand on the Catholic side of the great religious divide then rending Europe. But at the time, that is certainly not enough. What really matters is what specific lord or officer you serve – alternatively, which gang of predatory bandits. So what is your specific unit?

I asked, “What regiment? I am of the Emperor’s side: ’tis a rogue that denies his master!”

He answered, “We are of the dragoons of Soest [in Westphalia], and are come to fetch a couple of sheep: I hope, brother, if you be of the Emperor’s party too, you will let us pass.”

Watching his fellow soldiers, Simplicissimus is appalled by their language, where every serious oath involves the Devil or demons, and the holy figures of Christianity are mentioned only in blasphemy. As for the lives of the soldiers:

Recall that this all occurred in the titanic war within Christendom, setting Protestant against Catholic. But as Simplicissimus declares,

I being so brought up and reared as to have the presence of God ever before my eyes and most earnestly to live according to His holy will: and inasmuch as I knew all this, I could not but compare men’s ways and works with that same will: and methought I saw naught but vileness. Lord God! How did I wonder at the first when I considered the law and the Gospel and the faithful warnings of Christ, and saw, on the contrary part, the deeds of them that gave themselves out to be His disciples and followers!

One army unit in which he serves has its chaplain, a zealous man, but all he is concerned with is whether Simplicissimus had fulfilled his proper Easter duties of Confession and Communion. So much for Christian Europe.

Every word of these descriptions would have been equally true in the great religious wars of the sixteenth century, and the many conflicts preceding the Thirty Years War itself. That says a lot about their “religious” quality. Nor is there the slightest suggestion that Protestant soldiers acted any better than Catholic.

Throughout Christian history, there have been sincere and honest believers who have fought for the faith in the way they thought appropriate, and they presumably tried to apply Christian standards to that warfare. But whatever their goals and intentions, the resulting wars would have ended up much like that described here, whether they were fighting enemies within the faith, or outside it. That is always true in pre-Modern times, when armies could only survive by plundering civilians. At the best, the theft might be fairly orderly and bloodless – “requisitioning” they called it. They called it that even when it left those civilians to starve to death in their thousands.

In the classic 1965 film Shenandoah, set during the US Civil War, government agents come to “requisition” a Virginia farmer’s belongings for the cause. As the man (played by James Stewart) explains  to his son, “It’s a fancy word for stealing.” And that was a time when authorities actually were subject to legal and political constraints. Before the eighteenth century, they usually weren’t.

What changed in the interim was not a new sense of decency, morality, or Christian ethics, but rather the invention of efficient military logistics, based on bureaucratic structures and hierarchies. That depended on developing new structures for tax and finance, which initially emerged in Britain and the Netherlands after 1680. Add to that the enormous growth of food supplies in the Christian West with the agricultural revolution. Only when armies did not have to steal to eat did it become possible to demand some kind of civilized treatment of civilians. Only then did it became possible to fight wars without causing devastating famines. Only then could armies even think about forbidding rape – not because of safeguarding women victims, but because of the necessity to maintain discipline among the soldiers. (You find isolated examples in older eras of soldiers being executed for rape or looting, but virtually always because they were breaching discipline or disobeying orders).

In that pre-Modern era too, any vestigial sense of discipline or legality collapsed utterly when an army captured an enemy town or city, when the inhabitants were subjected to a close facsimile of Hell on earth. Modern armies might well behave like that at times, but we note such acts as grievous and atypical atrocities. Before the eighteenth century at least, that was the absolute norm. In most societies, the normal reason to spare survivors of a sacked city was to enslave them. Again, that largely changed with the emergence of modern armed forces, with generals who were desperately anxious to avoid a ruinous collapse of discipline.

Arguably, the US Civil War – with its 750,000 dead on both sides – was a model of humanity in terms of the behavior of the armed forces to civilians, at least when we compare it with earlier eras. The great exception there was Sherman’s 1864 March to the Sea, which in some ways recalls the Thirty Years War, but rather looks forward to the savage mass persecution of civilians in twentieth century conflicts.

We also know that in pre-Modern wars, looting and requisitioning were closely associated with systematic mass rape. I offer a question, to which I do not know the answer. Through Christian history, many preachers and theologians have had plenty to say on the subject of war in general, and on particular wars. Who was the first of those thinkers actually to cite the prevalence of rape in wartime, and to urge that it be prevented? Was there anyone before the twentieth century? Can I get some help here?

One of the greatest twentieth century plays is Bertolt Brecht’s anti-war classic Mother Courage and Her Children (1939). This is a loose adaptation of another Grimmelshausen story set in the Thirty Years War, but it presents exactly the same social setting as Simplicius Simplicissimus, and the same mood. In one scene, an army chaplain explains that “To fall in battle is a blessing, not an inconvenience, and why? It is a war of faith. None of your common wars but a special one, fought for the faith and therefore pleasing to God.” The cook to whom he is preaching replies that “It’s a war all right in one sense, what with requisitioning, murder, looting, and the odd bit of rape thrown in, but different from all the other wars because it’s a war of faith. Stands to reason.”

“Requisitioning, murder, lo0ting, and the odd bit of rape thrown in” – that’s a pretty good description of many, or indeed most, alleged wars of faith. Need I add that I am not trivializing the rape (or any other aspect of the account) but rather quoting the attitudes of participants? 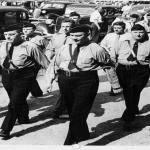 May 29, 2018 The Plot Against America
Recent Comments
2 Comments | Leave a Comment
"Paul wrote at the end of Romans to avoid those who cause divisions over non-essential ..."
Roger McKinney Will Reformed Evangelicalism Divide Over Racial ..."
"It appears that God was not finished with Lindbergh, at least at the point where ..."
stefanstackhouse The Conversion That Never Happened
"Everyone really should read the David French article referenced above. https://frenchpress.thedisp..."
Rod Bristol Survival and Resistance in Evangelical America
""as Black Lives Matter protests turned into riots"For shame. Some few BLM protests turned into ..."
guerillasurgeon Survival and Resistance in Evangelical America
Browse Our Archives
get the latest from
Anxious Bench
Sign up for our newsletter
POPULAR AT PATHEOS Evangelical
1