A carved image, about two feet tall, stands alone in a glass case in the Cluny Museum in Paris. At first it seems a typical image of the Madonna and Child. Both look straight ahead, holding the gaze of the viewer. Their matching golden robes fade so  easily into the golden background that it is easy to miss how mother and child are seated on an elaborately carved throne. Only the red apple loosely held in Mary’s hand stands out. This part of the image is easy to interpret. Mary redeems Eve. Or, more theologically accurate, the child of Mary redeems the sin of Eve. What this medieval image paints so vividly, the Madonna holding the Christ child in one hand and the apple in the other, medieval sermons pictured with words. A fifteenth-century sermon compilation proclaims: “The daughter of Eve was the beginning of damnation for mankind; [but] the faith of women in the new law was the beginning of salvation for mankind. The faith of Our Lady Saint Mary was the beginning of salvation for our world.” 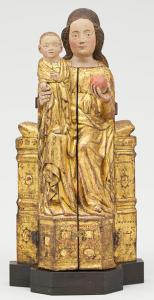 Like the creation of the fifteenth-century sermons, this Madonna now housed in the Cluny museum was carved in the fifteenth century. It was probably commissioned by Teutonic Knights on the continent (the Teutonic insignia—white mantle with black cross—is visible on one of the kneeling supplicants), but these types of Marian images proliferated throughout late medieval Europe: from Portugal to England, France, Poland, and even Sweden. It is called an “opening virgin” or a “Shrine Madonna.” A line slices the statue in half, allowing medieval devotees to open the body of the Madonna and view not only the Christ child within, but the Trinity enthroned. The “whole Godhead literally contained in the Virgin’s womb,” as Barbara Newman writes.

These images of the Trinity enthroned within the body of Mary proliferated in monasteries and cathedrals. They were also accessible to ordinary Christians. Margery Kempe, a self-proclaimed holy woman in early fifteenth-century England, describes an image similar to a Shrine Madonna in one of her visions. She meditates on how the trinity, as it lives inside the body of the Virgin Mary, also lives in the guest room of her soul. Her book records God speaking to her, describing the trinity sitting on cushions inside her soul.

For Margery Kempe, the Trinity was not only enthroned in the body of the Virgin Mary, but it was also enthroned within her own heart. Although most Shrine Madonnas were destroyed by the 18th century, perceived as heretical by Pope Benedict XIV, these images existed in medieval England and throughout medieval Europe in locations available to medieval parishioners. Elina Gertsman has found texts describing one, Our Lady of Bolton, staged in Durham Cathedral.

“Over the which Altar was a merveylous lyvelye and bewtifull Immage of the piecture of our Ladie, so called the Lady of Boltoune, which picture was maide to open with gymmers [two leaves] from her breaste downwarde. And within the said image was wrowghte and pictured the image of our Saviour, merveylouse fynlie gilted, houlding uppe his hands, and holding betwixt his hands a fair large Crucifix of Christ, all of golde.”

Shrine Madonnas, as well as the text of medieval sermons, jar with John Piper’s claim in 2012 that “Christianity has a masculine feel.” Undoubtedly some modern forms of Christianity have a masculine feel–such as that proclaimed by The Council for Biblical Manhood and Womanhood, by Paige Patterson, by the 2000 Baptist Faith and Message in Southern Baptist Churches, by Mark Driscoll, by the Acts 29 network.  But that doesn’t make “a masculine feel” God ordained. It just means that modern evangelicals have made it that way.

Shrine Madonnas like the one in the Cluny Museum remind me how wrong John Piper is. Christianity is neither masculine nor feminine–it, like God’s creation of humanity and the ministry of Jesus and the male and female supplicants gathered in the folds of the Shrine Madonna’s robes–has always included both.

I think medieval Christians understood this.

Isn’t it about time evangelical Christians did too?

For quotes and more about Shrine Madonnas: see Elina Gertsman, Worlds Within: Opening the Medieval Shrine Madonna (University Park, PA: Penn State UP, 2015); Barbara Newman, God and the Goddesses: Vision, Poetry, and Belief in the Middle Ages, 269; David J. Rothenberg, Music and Culture in the Middle Ages and Beyond: Liturgy, Sources, Symbolism (Cambridge UP, 2016). 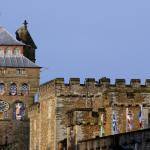 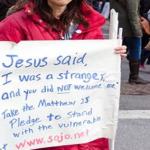 June 14, 2018 The Problem with "Welcoming the Stranger"
Recent Comments
2 Comments | Leave a Comment
"Informative and interesting. Thank you. This raises questions about the term Protestant Reformation."
the old scribe How the English Reformation was Named: ..."
"Thank you for the insights. As you pointed out, technology has been a two edged ..."
the old scribe Is Religion Naturally Averse to Technology?
"I suppose the question is whether or not the Holy Spirit could use technology to ..."
Nimblewill Is Religion Naturally Averse to Technology?
"What a great post, Allie! Insightful and eloquent."
Ansley Every Day People in Every Day ..."
Browse Our Archives
Related posts from Anxious Bench