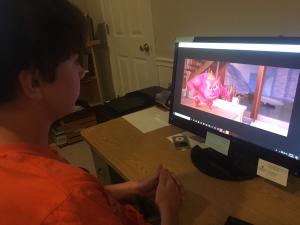 Children are very much with us in summer. If this summer’s most disheartening images feature migrant children separated from parents, one of its most lively comes in the box-office hit, Incredibles 2 , in the changeling person of the baby.  It’s cute and funny, but not only. The baby, Jack-Jack, turns into a monster when his will is crossed. Or just whenever. Cookie denied or comfort compromised, the sweet dimpled infant may morph into a long-toothed fuschia troll, swell to giant size, multiply bodies, shoot explosives out of his eyeballs, or burst into flame.

The baby’s yet-undisciplined superpowers offer metaphor for the general chaos children can generate. The Incredible’s monster baby is no mere cartoon gag but a character test for the parents. The baby stretches the skill set of Mr. Incredible, cast here as temporary stay-at-home Dad. While reviewers have faulted the film’s reliance on outdated stereotypes about paternal egos and household incompetence, father-with-children does demonstrate the unpredictable and strenuous nature of the work done by women like his wife. More than the couple’s older children, the baby shows adults’ limits to protect and shape their children.

It’s nothing if not provocative as a metaphor for how we might think about offspring, reminding that views about children are historically interesting not least for what they reveal about adults.

The film put me in mind of a book by historian Steven Mintz, Huck’s Raft: A History of American Childhood. That image, Huck’s raft, captures what Mintz wants to argue about that history. We may want to idealize it—resourceful boy in summer, floating on the water—but in spite of our imaginings, there never was a golden age where the majority of American young people was well-fed and well cared for in standards we would uphold today. Huck’s raft had roiling waters behind and dangerous currents ahead.

To get to the heart of American views of children, Mintz starts at the settlement of the Atlantic seaboard. There, he contrasts New England settlers’ childrearing with that of Indians encountered there (Eastern Woodlands children light on household chores and spankings) and with children in the Chesapeake (occupying a swampy Hobbesian world of exploitation and precarious health). New England Puritans occupy most of the space of the treatment of childhood in early America. And for good reason. As Mintz observes, back in England, Puritans “wrote twice as many books in English on proper methods of rearing children as all other groups combined.”

It may seem inconsistent that people so negative about children would put such effort into their upbringing. No romanticizing of sweet innocent babes here. As Mintz reports, they found babies’ crawling “bestial.” Puritans believed in infant depravity and predestination. That is, they assumed that all human beings were corrupt and wicked in tendency, and that only a few were saved, and that neither children nor adults could do anything to clean themselves up sufficiently to merit salvation. These beliefs might generate disdain for children, inspire little effort for their improvement.

Rather than making nurture irrelevant, though, Puritan views of children made it even more essential. As Mintz describes,

“For a century, their concern with the nurture of the young led them to monopolize writings for and about children, publish many of the earliest works on childrearing and pedagogy, and dominate the field of children’s literature….Perhaps most important, they were the first group to state publicly that entire communities were responsible for children’s moral development and to honor that commitment by requiring communities to establish schools and by criminalizing the physical abuse of children. …..Precisely because of their belief that children were born in sin, parents had to raise them with great care.”

Note: entire communities were responsible for children’s moral development.  Not a few who came to settle in New England credited their hopes for the rising generation as a chief motive for making the difficult passage across the Atlantic. Taking for granted human unruliness, they made plenty of rules to regulate children’s behavior. But their initiatives were not all negative. They expected children to contribute to household functioning. They insisted children be taught to read. They required parents to help children find a vocation–to equip them with skills to do useful work.

Their childrearing advice is bracing in the way it forces recognition that the topic is no lightweight one, not to be sidelined as mommy lit. If we restrain ourselves from caricaturing Puritan parents as harsh high-hatted types who would as soon snap a son in the stockades, we would see how fruitful their worries can be for our own use. Thinking about children is no playful thing but requires explaining what we think human beings are and are for, what we love and loathe about ourselves, how we would hope our offspring go beyond ourselves. 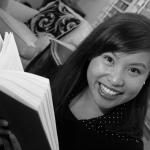 Matthew Lynch (Regent College): 30 OT/HB Scholars to...
Matthew Lynch, Assistant Professor of Old Testament, Regent College Why do you...
view all Evangelical blogs
What Are Your Thoughts?leave a comment
Copyright 2008-2020, Patheos. All rights reserved.