Despite their macabre subject matter, Quaker persecution narratives add color to histories of seventeenth-century New England. Compared to colonial court records, puritan sermons, and even many letters and diaries, Friends wrote vivid and rich accounts of their tribulations. The narratives also have done much to fix in the American mind the image of New England puritans as cruel tyrants.

The Quakers published their accounts back in England with the hope that English officials would pressure New England magistrates to cease their persecutions. It worked, at least in part. In 1661, the restored Charles II ordered Massachusetts Bay governor John Endecott to stop executing and maiming Quakers and to send imprisoned Friends back across the Atlantic. 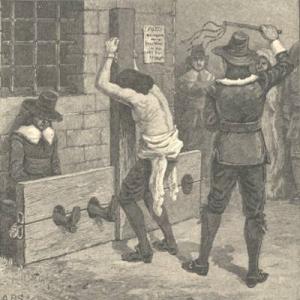 That Friends suffered greatly is beyond doubt. Most famously, Massachusetts executed four Quakers for having returned to the colony after being banished. Other Quakers lost ears. From New Amsterdam to Boston, magistrates viciously whipped Quakers. Massachusetts Bay banished some of its own inhabitants, and in many localities, officials took the property of Quakers and their sympathizers as payment for fines.

Even granting the basics, did the Quakers provide accurate accounts, or did they exaggerate some of the details to make their case stronger? One small example. In 1657, a missionary named Robert Hodgson went to an English settlement within New Netherland. Arrested and dragged to New Amsterdam, Hodgson was fined and sentenced to two years’ labor “with the negroes.” He refused to work. For his disobedience, he was whipped. A letter from two Dutch Reformed ministers describes the punishment: “After two or three days he was whipped in private on his bare back, with threats that the whipping would be repeated again after two or three days, if he should refuse to labor.”[1]

Hodgson’s own account adds considerable detail: “they caused a Negor to take a pitch-rope nigh four inches about, and beat him with it untill he fell downe, and they tooke him up again by strength, and beat him untill he fell downe again the second time; it was judged that hee received a hundred blowes … he stood chained to the Barrow, and nigh until the middle of the day, the Sun shining very hot, and hee beeing much bruised and swelled with blows.” Certainly, the Quaker account is far more vivid, but the two narratives both describe the same sequence of events.[2]

The two accounts explicitly disagree on one small detail. Hodgson says that the authorities fine him six hundred guilders; the Dutch ministers’ letter reports a fine of one hundred guilders. The latter would roughly correspond to the yearly wages of an unskilled laborer. The amount did not really matter, because Hodgson was not going to pay any fine. Let’s say that Hodgson exaggerated the amount of his fine. Did he overstate the number of blows he received?

Let’s take a look at a second instance. Humphrey Norton came to New England on the same boat that brought Robert Hodgson. Norton went to Rhode Island, which Friends termed “the habitation of the hunted-Christ” (puritans termed it the latrine of New England). He then came to New Plymouth, which already had a group of men and women “convinced” of the light of Christ. Plymouth’s magistrates expeditiously banished Norton, who next visited an English settlement on Long Island. Arrested, he was brought to New Haven. Norton spent weeks in prison, sending theological “queries” (his word) to the minister John Davenport.

New Haven’s magistrates had Norton brought before the court. According to Norton’s account, when he tried to speak, “they caused a great iron Key to be tyed cross his mouth.” They then sentenced him to be whipped, branded in the hand with the letter H for heresy, banished and fined. Norton described a brutal whipping of 36 stripes, and he added that they purposefully branded his writing hand. Like other Friends, Norton refused to pay his fine, but a Dutchman negotiated a reduced payment, which he made on Norton’s behalf.[3]

A much longer account exists in the town records of New Haven, published about a hundred years ago. As in the case of Robert Hodgson, the two records largely corroborate each other. In this case, New Haven’s officials also documented the intervention of a Dutch man, identifying him as the baker Andries de Haas.

The New Haven records, however, narrate the episode very differently. They add the not insignificant detail that Norton was arrested after denouncing a minister during a Sunday worship service. They also explain why they charged Norton with heresy, detailing — probably in the least flattering manner — the contents of the papers Norton wrote in jail: “Hee saith ther is no Scripture that speakes of a Sacrament, nor of infants baptisme, nor of a catholicke church nor a catholique faith, nor of inherent righteousnes, nor of originall sinn, nor of Christs merrits, nor of a naturall light, nor a light of nature, nor the light of a naturall conscienc, nor the light of Scripture, nor a written word of God…” He called the colony’s ministers “epicurs and belly-Gods” and likened its magistrates to Judas and Cain. Regardless of whether or not they presented his ideas with much accuracy, the town records make plain that Norton did pretty much everything he could to make himself obnoxious.

According to his accusers, Norton in court constantly interrupted the proceedings, then refused to speak when asked to do so. The town records do not reference an “Iron key,” but they do state that “he was wholey put to silenc.”[4]

Quaker accounts and colonial records are both important for historians seeking to reconstruct the early years of New England Friends. In many cases, the colonial records are quite sparse (the above-mentioned New Haven records are somewhat exceptional), leaving historians to rely on the publications of missionaries such as Humphrey Norton and John Rous. I find it reassuring that at least in these instances, Quaker and puritan account agree on the basics.

The Quakers downplay their own boorishness and accentuate the cruelty of their opponents. The magistrates and ministers emphasize their patient adherence to law while stressing the heretical beliefs and rude behavior of the Quakers.

Another thing to keep in mind about the early Quaker accounts is that they only tell certain parts of the experience of early New England Friends. They focus primarily on Quaker conflicts with magistrates and their suffering. They tell us much less about how missionaries initiated conversations with prospects for “convincement” (the Quaker equivalent of “conversion”), what transpired when the first New England Friends met (did they mostly sit in silence, or was the power of the Lord often manifest?), and how meetings and worship practices changed during these early years.

One more point, which I will elaborate in a subsequent post. It is easy to forget when reading about the cruelty of New England magistrates that their cruelty — or desire to punish heresy — was not terribly unusual for the mid-seventeenth century. Massachusetts was unusual in executing Quakers, but a number of Quakers died in English prisons during the early years of the Restoration. Thousands went to jail. Persecution of Quakers was not confined to New England but was something that united many trans-Atlantic societies.

UPDATE: Jaap Jacobs informs me that the Dutch Reformed ministers also report a fine of six hundred guilders. The translation in the below-cited Ecclesiastical Records is incorrect. That provides even more evidence that Quaker narratives of persecution are in many cases quite reliable indeed. 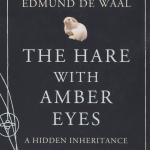 July 20, 2018 America 2040: The Church of The Rest
Recent Comments
2 Comments | Leave a Comment
Browse Our Archives
get the latest from
Anxious Bench
Sign up for our newsletter
POPULAR AT PATHEOS Evangelical
1

What Do the People Love?
Cranach
Related posts from Anxious Bench