Many years ago, somewhere in the early Jurassic era, I taught in a criminal justice department. This was a very valuable experience, in giving me the opportunity to learn skills and insights that can very usefully be applied to understanding history, and especially in its religious forms. Some of these approaches have been on my mind recently as I look at debates over immigration and nativism, particularly in Europe.

Issues of drugs and drug policy have long been of prime interest to scholars of criminology and criminal justice. The questions were obvious enough. There was no natural linkage between the harmfulness of a substance, as it might be assessed objectively, and the severity with which it was penalized by law. At the time – the 1980s, say – tobacco was thoroughly tolerated, while marijuana use could land you in prison. It was not immediately obvious why a particular substance posed a problem, and if it did, why it should be met with one particular response rather than another – by harsh penalties rather than medical treatment. So what shaped laws and official policies? Obviously, questions of race, class, and generational conflict all played their part.

One landmark contribution to these debates came from the eminent sociologist Joseph Gusfield, who in 1963 published the book Symbolic Crusade: Status Politics and the American Temperance Movement. (Gusfield made plenty of other contributions, especially The Culture of Public Problems, 1981, but here let me focus on this early book). He traced the history of Temperance from nineteenth century origins to its triumph in Prohibition, and stressed that the laws must not be understood primarily as a rational response to a problem. Rather, they reflected questions of status and power. In the early nineteenth century, American Protestants became more likely than Catholics to reject alcohol use. As time went by, those differences became massively more marked, as drink became a key cultural badge, a symbolic marker in the era of mass Irish and German migration. Increasingly from the 1850s, Protestants persuaded legislatures to prohibit alcohol, and the fact of their success proved that they still had the power to make their presence felt.

As once-prominent ethnic and social groups found their position increasingly challenged, they supported Temperance as a symbolic issue which would allow them to reassert their power and their values through legislation. To quote Gusfield: “Status issues function as vehicles through which a non-economic group has deference conferred upon it or degradation imposed upon it. Victory in issues of status is the symbolic conferral of respect upon the norms of the victor and disrespect upon the norms of the vanquished.”

So we native Protestants have let in millions of alien immigrants? Do their churches scar our skylines? Have our cities become alien territory, where we are a small minority? Have we been driven to the small towns and rural areas? Has our Protestant Utopia been subverted? Yes to all this. But damn it, we can still organize a triumphant social movement that will impose policies those newcomers don’t want and won’t like. We are doing this because we can! We still run this country. We still get to define who are the real Americans.

Temperance was a classic manifestation of status politics, and status defense – in this case, proclaiming the continued status of a group that by any objective standard was declining in relative power. This was a symbolic crusade, driven by status anxiety. The weaker and more threatened those old declining groups become, the more zealous they are to impose their will through harsh laws, through coercive reform, and that trend culminated in the Prohibition years.

Deference and degradation – a critical duo. Respect and disrespect.

That model can usefully be applied to plenty of other legal campaigns, and by no means just in issues of substance use. Commonly, racial fears and concerns are at the vanguard of such movements.

This was in my mind recently when I was discussing some recent legal developments in Europe, where various countries are taking steps t show their Christian character in various ways. One common demand is for the display of crucifixes in classrooms and public buildings, a policy either implemented or under discussion in Bavaria, Hungary, and even Italy. I kept thinking back to Gusfield’s model. Surely, the demands for public displays of faith don’t necessarily reflect an upsurge of piety, or a sense that those symbols will improve public morality. They are a symbolic crusade, to show who still runs the country, despite all evidence to the contrary.

The struggle might be framed in terms of religion, but the actual issues involved are quite different. They are matters of status politics, the politics of the urban-rural divide, of generational conflict, and above all, of culture.

It also helps to remember that in the nineteenth century, that central struggle between Protestant and Catholic had race at its heart. That may sound strange – weren’t the immigrants mainly Irish? – but let me explain. We live in a world where the term “White” has a widely recognized meaning, but that meaning has shifted tectonically over time. Over the past generation, “Whiteness” has been the subject of many academic studies, which trace the stages by which different groups were admitted to that exalted category: first the Irish and Germans, later Slavic and Mediterranean peoples, and then Jews. In a well-known 1995 study, historian Noel Ignatiev traced How the Irish Became White. Nineteenth century Temperance, in other words, was not just a Protestant reaction, but a defense of Whiteness. Then as now, religion often becomes a label for those other concepts of race and culture – for deference and degradation.

I’m not suggesting that any particular movement is “not really” religious, as religious thought and language so often merge inextricably with other motives and drivers. Religion also offers a vehicle for thought and language, which frames the rhetoric of any movement, whatever we think it is “really” about. That is equally true for movements of right or left, liberal or conservative. But I do find Gusfield’s approach one worth applying elsewhere. 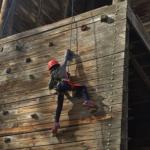 August 21, 2018 Lena and the Zipline: A Parable of Learning and Courage
Recent Comments
3 Comments | Leave a Comment
Browse Our Archives
Related posts from Anxious Bench