The Deadest Orthodoxy of American Evangelicalism

I believe in Jesus Christ, who though crucified, dead, and buried, rose again on the third day. And I believe in the resurrection of the dead.

As we confessed both those beliefs in church this morning, my mind turned to Twitter — host to an odd fracas this weekend that started with a tweet by Episcopalian priest Broderick Greer and continued with a subtweet by the evangelical writer and editor Katelyn Beaty.

The evangelicals with instagram hipster aesthetics and churches that meet in theatres know EXACTLY what they’re doing: Misleading otherwise-progressive urbanites to adopt fundamentalism in skinny jeans, accompanied by a drum set.

I have personally been duped by churches where the pastors wear traditional stoles with crosses on them, only to find out years later that no one on the pastoral staff affirms the resurrection.

Being Twitter, things went predictably downhill from there, with accusations of fundamentalism, heresy, mansplaining, and whitesplaining temporarily taking over certain corners of the timeline.

I don’t want to rehash that back-and-forth in any depth. And I’m not sure a blog is much more likely than Twitter to resolve theological complexity. But all that discussion of resurrection did get me thinking about something that I can develop more fully in 1100 words than in 280 characters:

I’m not an Episcopalian and so will leave it to another blogger to deal with the meaning and importance of the resurrection in that tradition. But I am an evangelical. And this social media episode reminded me that resurrection is both hugely important to evangelicalism and not taken nearly seriously enough by most evangelicals.

Indeed, I think that belief in the resurrection may be the deadest orthodoxy of American evangelicalism.

Orthodoxy because evangelicals like me do think that it is right to believe that Jesus Christ rose from the dead, “the firstfruits of those who have fallen asleep” (1 Cor 15:20). Dead because many evangelicals affirm belief in the literal, bodily resurrection, but deny it by the way we live.

Greer accused Beaty of deploying “a very typical scare tactic white evangelicals” had long used against their mainline cousins. Now, I suspect that non-white evangelicals are as likely as Beaty and me to affirm the resurrection, but it is no doubt true that evangelicals have often used this doctrine — fairly or not — to distinguish themselves from other Protestants. I’m actually bit a surprised that it wasn’t until volume V of The Fundamentals that R.A. Torrey wrote on “The Certainty and Importance of the Bodily Resurrection of Jesus Christ from the Dead.” Carl Henry may have distanced neo-evangelicalism from fundamentalism, but one of his most famous exchanges with Karl Barth centered on “the historical factuality of the resurrection of Jesus.”

If anything, I think my fellow evangelicals can focus so much on the Cross that they risk making too little of the Empty Tomb. I don’t mean to set them against each other — they’re inseparable. But if we’re talking about emphasis, I don’t think Torrey was wrong to insist that it’s the resurrection that “is the corner-stone of Christian doctrine.” In the New Testament, the single clearest statement of the Gospel — the Evangel that makes evangelicals evangelical — is Paul’s explanation of the resurrection in 1 Corinthians 15, which starts with him reminding his readers “of the gospel I preached to you,” the gospel by which they are saved, and concludes with the assurance that death has been swallowed up in the resurrection.

I’ll never understand all the mysteries of the resurrection, but here’s one pretty clear application: if evangelicals are truly marked by their activism, it’s because a belief in the resurrection lets them give themselves “fully to the work of the Lord,” knowing that their “labor is not in vain” (1 Cor 15:58). That’s the verse I’ve jotted down the rare times anyone has asked me to sign their copy of The Pietist Option, as a small way of reiterating the centrality of the resurrection for our book’s hopeful vision of Christian renewal.

But one legacy that Pietism has bequeathed to its evangelical descendants is a wariness of “dead orthodoxy” — not just as they detect it in other churches, but in evangelicalism itself. What Pietists mean by this is that intellectual assent is necessary, but insufficient. Believing rightly means little if the belief doesn’t cause us to feel rightly and live rightly. Philipp Spener addressed the phenomenon in 1675’s Pia Desideria:

…you hear the Word of God. This is good. But it is not enough that your ear hears it. Do you let it penetrate inwardly into your heart and allow the heavenly food to be digested there, so that you get the benefit of its vitality and power, or does it go in one ear and out the other?

What would happen if evangelicals let the reality of the resurrection penetrate into our hearts and give us the vitality and power of Christ’s victory over death?

First, it would cause us to value life all the more. Yet many “pro-life” evangelicals seem to care little when their preferred presidential administration closes this country to those seeking refuge from war and gang violence. Or when it ignores the deaths of thousands of Americans in Puerto Rico. Or when it leaves unaddressed (or worsens) problems with health care, drug abuse, poverty, and climate change that threaten the lives of millions.

Second, a living orthodoxy of resurrection would leave us evangelicals more hopeful and less fearful. Instead, as I observed in our book, “The same people who argue most strenuously for the historicity of the resurrection can seem the least likely to live as if Jesus Christ has actually conquered the grave.”

That was written in 2017, but this summer I’ve heard a growing crescendo of evangelical voices decry the fearfulness of evangelicals.

• I’ve already reviewed John Fea’s book explaining the historical link between evangelical fear and evangelical support for Donald Trump. And if you doubt Fea’s argument, simply read Donald Trump’s dire warnings of left-wing violence at the recent White House dinner for leading evangelicals. (He might not know much about Christianity, but Trump certainly knows which religio-political buttons to push with this particular group.)

• But Trump’s comments led Michael Horton to write a Christianity Today piece asking, “why does the appeal to fear work so consistently with many who claim to stand in the line of Jesus’ disciples, to whom he said, ‘Do not be afraid, little flock, for your Father has been pleased to give you the kingdom’ (Luke 12:32)?” 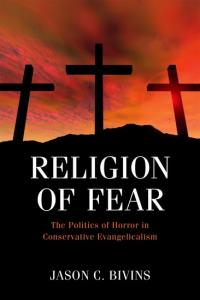 • Last week here at Patheos Evangelical, Paul Louis Metzger and John Morehead warned that “Evangelicals are no strangers to fear.” While they’re not unique in that respect, they are clearly subject to being manipulated by fear. Metzger and Morehead quoted Jason Bivins’ conclusion that

It’s bad enough that evangelicals are at least as fearful as other Americans — if not more so — when they consider the relatively slight risk of experiencing terrorist attacks or violent crime. Or, on the flip side, that they’re more likely to own guns and oppose stricter gun control. But a lived belief in literal resurrection should lessen our fear of both literal and metaphorical death.

“You’re one election away from losing everything that you’ve got,” Trump warned evangelicals at the White House. If belief in resurrection were a living orthodoxy, rather than a dead one, evangelicals wouldn’t lose a night’s sleep at that thought. Rather than fretting about the potential death of their political and cultural power, they’d instead recognize the potential for new life — as the church is renewed under the leadership of Christians who are not necessarily male, white, Republican, or native-born.