Did the First World War end too soon? At first sight, such a question might seem ridiculous, if not actively blasphemous. Did not the peace that November end a cycle of bloody and futile slaughter? Actually, a surprisingly good case can be made for the “too soon” theory, one that raises critical questions of ethics and political morality.

The argument has recently been discussed by the first-rate historian David Reynolds, in an article in the British New Statesman. The argument goes like this. By the Fall of 1918, the German armed forces were on the verge of collapse. Contrary to the myth of futile trench warfare, Allied forces were by this point fighting battles on something very much like sophisticated World War II lines, with intense use of advanced technology, including tanks and aircraft, and the application of scientific techniques to artillery. We are looking at mobile, combined arms, warfare. The British especially (together with the Canadians and Australians) had achieved a technological and organizational sophistication that they would not reach again until long after 1945. Although US forces played only a marginal military role in the 1918 campaigns, they offered the prospect of a massive new infusion of men and materiel for the coming year – some four million men. Allied plans for the 1919 campaigns, which of course never happened, look uncannily like later ideas of highly mobile blitzkrieg warfare.

The main question was whether there would be a German army left to oppose them. German forces in the Fall of 1918 were evaporating fast due to mutinies and desertions. A British blockade had reduced Germany and Austria-Hungary to near-starvation, and the Austrians were desperately seeking any way out of the war, to preserve their empire in any recognizable form (they failed). By the Fall of 1918, Germany and Austria Hungary were both on the verge of a revolution, possibly a full scale lurch to something like Bolshevism. None of the Western Allies faced any such danger.

Taken together, that more than explains the decision of General Erich Ludendorff to seek an Armistice from September 1918 onward.

But Ludendorff was playing a devious game, and one that ultimately paid off magnificently. He knew that the German forces were beaten, but he wanted to be sure that blame for the defeat would fall to a new civilian government, and not the army, and that is what occurred. But imagine the effect. German people through 1918 were still receiving an unfiltered diet of victory news, of repeated victories and triumphs. We’re winning! We’re winning! and then suddenly on November 11, seemingly out of nowhere, a new message went out: oh, by the way, there’s an Armistice. Not, you notice, a surrender, but an Armistice – from Latin words meaning a standstill or stoppage of arms, with no implication of victory or defeat.

As peace negotiations proceeded over the following year, Germans came to believe that what should have been a simple end of hostilities was being treated as if the Allies had won some kind of victory! What a dreadful falsehood! Those vicious, deceptive Allies, and the vile lie that proud and invincible German forces had been conquered!

The question then was how an almost-victorious Germany had fallen into this trap, and very soon, there arose the idea of a stab in the back, Dolchstoss,  by the country’s internal traitors, by socialists, and above all, by Jews. That was the myth pushed by Ludendorff, and parroted chiefly by Protestant clergy, and the emerging civilian republic could never rise above that. I keep coming back to the churches in all this. The famous Lutheran theologian Reinhold Seeberg composed an epitaph for a war monument that is at once a perfect example of Latin at its most precise and concise, and a chilling manifesto for the generation of 1940. Seeberg addressed the graduates of the University of Berlin killed in the war as Invictis Victi Victuri—to the unconquered, from the conquered, who will themselves conquer. Note again the myth that German forces were unconquered.

Or to quote Reynolds, “Ludendorff, the architect of defeat, soon threw in his lot with Adolf Hitler, joining in the abortive Munich Beer Hall Putsch of 1923. The budding Führer is now the most notorious of those who pedalled the stab-in-the back myth, but many other conservatives took the same line after the catastrophe of 1918: Germany hadn’t been defeated; it was robbed.” What so appalled the Germans when the French occupied the Rhineland in the 1920s was that they dared do that to an allegedly unconquered people.

Just imagine the 1918 Armistice had not happened, and the Allies had pushed forward – as they would assuredly have done, had they known just how catastrophic was Germany’s internal situation that November. This was the aggressive line pushed especially by the US commander Jack Pershing, among others. Possibly in late 1918, certainly in the Spring of 1919, German forces would have imploded as thoroughly as they did in 1945. Allied forces would be pushing across the Rhine and deep into Germany, whose civilians would know the kind of devastation hitherto inflicted on Belgium and France. There would have been no stab in the back myth – just a recognition that the state, and its armed forces, had been utterly defeated.

As Reynolds says, the peace terms should not have been issued at Versailles, but at some powerfully symbolic German venue, such as Potsdam, as a later generation of Allies did in 1945. “Yet a genuine turning of the tables would have required something different: a treaty stabbed into Germany at its own historic heart, at Sans-Souci in Potsdam on the outskirts of Berlin or in another of Frederick the Great’s palaces. Yet this was impossible in 1919 because Germany had not been invaded, conquered and occupied. That’s why [French Marshal] Foch predicted darkly that Versailles was not a peace but merely an armistice for 20 years.” And of course it was.

In that scenario, Germany would have had to come to terms with a ruinous and undeniable defeat, which would have prevented the lionization of the supposedly betrayed armed forces. We would also have avoided the pernicious myth of the Versailles peace settlement as a ruthless act of exploitation visited upon a proud and undefeated enemy. German nationalists, in short, would have had none of the rhetorical or ideological ammunition that permitted the rise of the Nazis. Nazism has been aptly described as a system designed for the exclusive purpose of preventing a recurrence of the betrayals of 1918.

It was precisely to prevent such a myth recurring again in the 1940s that the Allies demanded unconditional surrender: no Armistices this time around. There must never be another Dolchstosslegende.

There are an endless number of unknowns and speculations in this story, but for the sake of argument, let’s consider a might have been. Suppose that the war did not end in November 1918, but rather in May (say) of 1919, followed by the Treaty of Potsdam. In those last few months, suppose that many thousands more combatants died on both sides – as many as a million in all? But in the long term, that prevented the rise of the Nazis and the coming of the Second World War with its sixty million dead, and the Holocaust of the European Jews. If that scenario is even vaguely within the bounds of reality, would the chance have been worth it?

Remember the line in Casablanca when Captain Renault warns the German officer that “We mustn’t underestimate American blundering. I was with them when they blundered into Berlin in 1918.” Of course that never happened, they never took Berlin. But if the war had lasted another few months, they might indeed have taken the German capital in 1919, and the world would have been radically different.

Dare we ever contemplate an alternative reality in which we wish for a savage war to have continued, rather than ended? Would the world have been better?

November 9, 2018
The Six Year Rule, and Why I Am Totally Certain What Will Happen in US Elections in 2020
Next Post 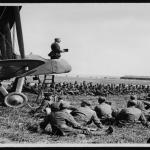